The mayor on the recording, then says, “You were not six feet away.” 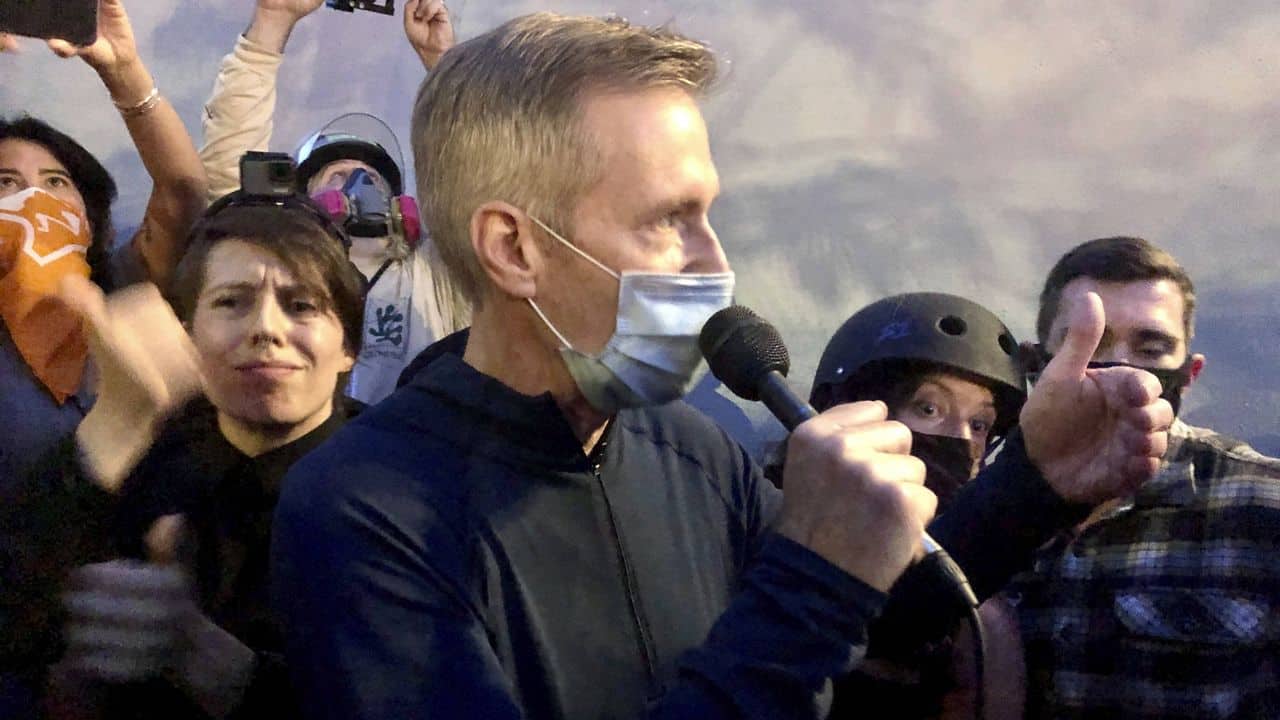 Police on Tuesday identified a man who was pepper-sprayed by Portland Mayor Ted Wheeler as a partner at a law firm who also tried to obtain surveillance footage of the mayor in a restaurant and get a copy of his meal receipt.

An additional police report identified Cary Cadonau as the man who was pepper-sprayed by Wheeler after he confronted the mayor leaving a restaurant Sunday evening and accused him of not wearing a mask. No charges have been filed in the incident. Cadonau didn’t immediately return an email seeking comment.

Wheeler and Sam Adams, who served one term as Portland mayor from 2009 to 2013, had been dining in a tented area and were walking to their cars when Cadonau approached, unmasked, and got close to the mayor’s face while filming with his phone, according to police reports.

According to a statement the mayor gave to police, Wheeler told the man of current COVID-19 regulations, which allows people to take their mask off to eat or drink.

“He then accused me of other things to which I indicated he did not understand the rules and should probably have a better understanding if he was going to confront people about them,” Wheeler said in his statement.

Wheeler said that the man stood within one or two feet of him and Wheeler became concerned for his safety and contracting COVID-19. Wheeler told the man to “back off” and that he was carrying pepper spray, which he would use if necessary. When the man did not listen, the mayor said he sprayed him in the eyes.

“He seemed surprised and backed off,” Wheeler told police. “He made a comment like, ‘I can’t believe you just pepper sprayed me.’”

Adams, whose statement to police was consistent with the mayor’s, suggested to Wheeler he should leave for his safety. Before doing so, Wheeler said he threw a bottle of water towards the man so that he could wash his eyes, he told police.

Cadonau told police when contacted Monday that he didn’t want to discuss the matter because he was an attorney. He said the mayor should be held “accountable” but declined to elaborate, according to the police report.

Cadonau was asked why he attempted to get surveillance footage from the restaurant in Portland’s Hillsdale neighborhood as well as his food and drink receipt from the pub, according to the report.

“Mr. Cadonau said he wanted the receipt because it would show how much alcohol the mayor consumed that evening. I asked him multiple times if he wanted to talk about the incident, share his video footage, or provide his side of the story but he respectfully declined to say anything more,” Officer Matt Miller wrote.

Alpenrose Dairy general manager Josh Reynolds released a statement to KGW on Wednesday that read, in part: “In 2019, Smith Brothers Farms purchased Alpenrose. As such, Mr. Cary Cadonau no longer has ownership interest in, nor is affiliated with, the company.”

Wheeler, who was reelected in November, has been targeted by left-wing demonstrators, including some who smashed windows and set a small fire inside his condo building.

In an audio recording captured by Adams, Wheeler can be heard telling Cadonau, ”You are one foot away from me.”

Cadonau is heard saying, “You’re going to pepper-spray me?” Moments later, he can be heard saying “Oh my God.”

Adams, on the recording, then says, “You were not six feet away.”