Hundreds of thousands of French protesters took to the streets yesterday to voice their anger at President Emmanuel Macron’s latest COVID-19 ‘health pass’ plans. Earlier this week, the French leader announced plans to roll out mandatory ‘health passes’ for all restaurants, bars, hospitals, shopping malls, trains, planes and other venues. The passes include data on Covid test results and vaccination status.

Protests against the plans took place across the country.

They called on Mr Macron to resign and threatened to boycott the health pass.

France is known as one of the most vaccine-sceptic countries in Western Europe.

Rallies turned violent in some cities like Nantes, where police deployed tear gas to disperse the demonstrators.

In Lyon, the police arrested nine demonstrators while in Lans-en-Vercors, a vaccination centre was ransacked on Saturday morning.

An estimated 114,000 people took part in the protests, according to the French Interior Ministry.

In response, Emmanuel Macron has climbed down on part of the health pass rules as he backtracked on its use in shopping centres.

On Sunday, Finance Minister Bruno Le Maire said that the passes will now only be required to enter malls with a surface area of more than 20,000 square metres.

He told the French press: “Business leaders are worried and I want to reassure them: We will show understanding.”

Mr Macron is facing significant backlash for his handling of the Covid pandemic as he faces re-election next April.

He has recently cracked down on vaccine sceptics after he made vaccines mandatory for healthcare workers.

Say no to COVID19 vaccine passport of any sorts.

Macron is a heartless authoritarian psycho who is ideologically committed to forcing the toxic injections on the ordinary masses even though they result in massive severe adverse reactions and deaths. Its amazing to me how he survives politically let alone physically. Like all of the elitists who promote these injections he obviously has not taken the real thing.

I can see him following in the footsteps of Marie-Antoinette any day now.

Marie Antoinette was a good, extremely charitable woman who NEVER SAID “Let them eat cake”. The bad press she gets from stupid blue-pilled historians is criminally slanderous. Red revolutions are the devil’s spawn, directed and followed by the scum of the earth.

To build play villages rather than real housing for the poor was not ‘good’.

He’s a figurehead, an empty suit, entirely made up from scratch to steal the presidency from Le Pen.

Yes, Macron is a psycho, but like Biden he was elected by a population of similar lunatics.

Say….doesn’t this remind you just a little of the way the NRA ‘manages’ school shootings?

Scenario: Mass shooting at an American high school. Dozens killed by student some sources claim was bullied, using a semi-auto assault-rifle-style long gun with high-capacity magazines. Public anger focuses quickly on the ease of obtaining such weapons in America, and activists demand tighter regulation as well as a ban on traffic in high-capacity magazines, useful only for combat.

The NRA’s response: not enough responsible gun ownership, training and employment in educational institutions where there are large numbers of vulnerable people in a constricted environment. Teachers should wear sidearms at all times in school settings, and receive and be assessed in the appropriate training to act quickly to neutralize a motivated shooter or student with mental-health issues before innocent people can be hurt.

Public reaction: Hell no, we’re not doing that; Jesus Christ, what’s the matter with you?

NRA response: okay, sorry, maybe too far. I was just trying to help.

Situation: everything goes back to the way it was before. Public feels like it gained a victory, and backed down the NRA. The NRA receives what it wanted in the first place, through skillful redirection and the appearance of grudgingly giving in.

Macron did not say anything about abolishing vaccine passports, only modified the parameters a little; it would only take a managed ‘outbreak’ to reinstate his original plan once the documents become law. The world must not accept vaccine passports in any form; they are an unacceptable curb on freedom, and invite further regulation if accepted.

The vaxxers often cite the ‘yellow book’ which was a traveler’s record of internationally-recognized vaccinations against malaria, yellow fever and the like. Vaccinations for these were tested thoroughly and have been in use for many years and have a very low rate of reaction. Producing the immunization book was almost never a requirement even for international travel, and you sure as hell didn’t have to show it to get into a restaurant or a rock concert. Anyone who tries to portray the situations as equivalent is also just trying for redirection and confusion.

Sort of like the frog slowly boiling in the pot, where all frogs “will own nothing and be happy”.

The frogs outside the pot have different rules, just for them.

” gun with high-capacity magazines.” “High capacity” is a meaningless term. Who defines “high?” The same totalitarians that define “emergency?” The term is amorphous. It can mean any amount the speaker wants it to mean.

“semi-auto assault-rifle-style” Its obvious, you know nothing about guns. One cannot have a “semi auto”, (you must pull the trigger each time to fire a round) and a assault rifle (pull the trigger long enough and all of the rounds are fired) in the same gun. It either is semi auto or automatic. Kind of like a ball that is red all over at the same time it is green all over.

I can see you only like guns in the hands of criminals OR government thugs..

Mark is rather obvious isn’t he? He’s the sort who will let others fight while he hides to emerge, and side with the winners.

That was Microbe model for “Health Pass” .. 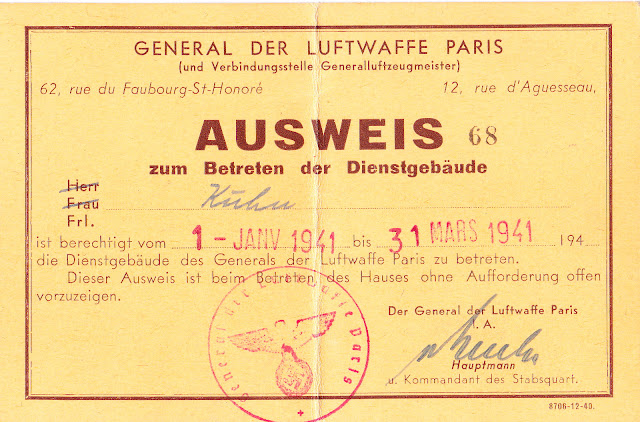 This yellow ID card in German issued by the department of the NAZI’s Airforce office in Paris authorizes the holder to enter the department’s (illegally occupied) building in Paris between the dates indicated and had to be shown without being requested. I don’t see much connection with the so-called “Health Pass” but I do think the people running our governments are as corrupt and evil.I get the idea and association, though, even if this is not the best example.

PS: Macron would have probably helped them move into the building if he was alive at the time.

So called “medical” tyranny. Tyrants need to be shot.

With their own vaccine ????

They must keep the pressure on until Macron back’s off completely. The people have all the power…NOT THE POLITICIANS! Keep on hammering Macron and asking for his resignation.

We are all together in this war against the new world order. They will never win if we send the message worldwide. Fight back…stop being a sheep! To store and restaurant owners, ban all top politicians for life! They constantly go after our freedoms so hit them where it hurts.

To think that there was a time when I had serious respect for the French. Hopefully Bastille Day will be canceled to save the French from the embarrassment of remembering their heroic past.