The people with the most Pfizer injections are about to get hammered by the ‘true’ Delta plague, Pfizer predicts

Good news for the science-savvy stay-at-home specialists who inhabit the Northeastern United States: The “true” Delta wave is on its way! The previous Delta wave was merely a “warning,” Pfizer has revealed. This is very reassuring news because East Coasters have Pfizer vaccine dripping out of their eyeballs, so if anyone can defeat the Genuine Delta, it’s them.

Here is a news article: 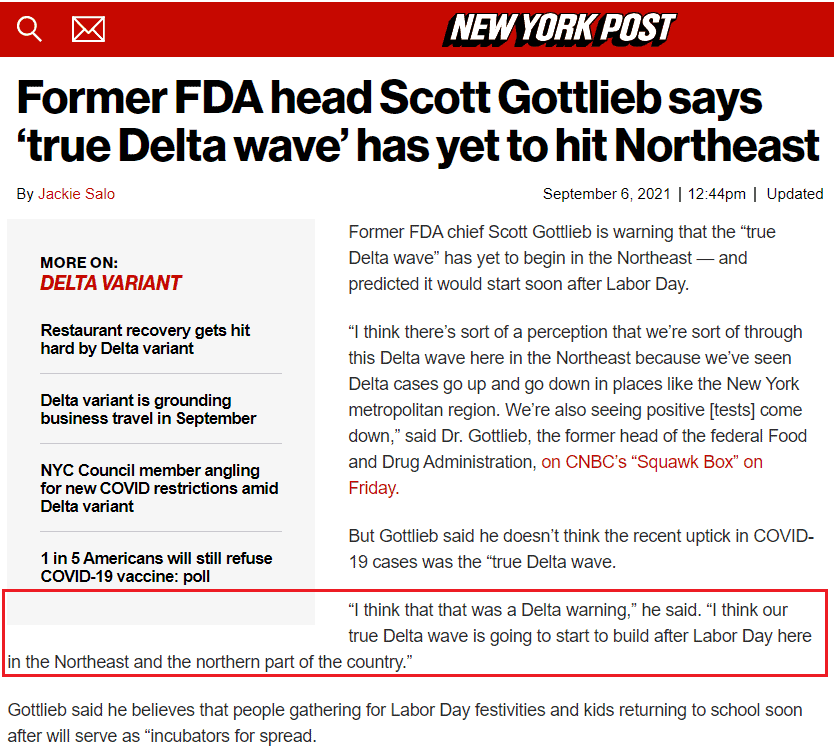 “But Mr. Slavsquat,” we can already hear you say. “Our beloved New York Post is quoting the former head of the FDA, not Pfizer!”

Scott Gottlieb left his Pfizer-regulating government post in 2017, and then joined Pfizer’s board of directors. The Post decided it wasn’t necessary to disclose this.

CNBC’s article described him as a “former FDA chief,” but at least had the decency to mention in passing that he “now serves on the board of Covid vaccine maker Pfizer.”

CNBC used to be more forthcoming with this information:

Anyway, back to the topic at hand: Pfizer is telling its biggest fanboys (the double-dosed, highly moral people who want unvaccinated lepers to be excluded from society) that they are about to get pummeled by a virus that Pfizer’s “highly effective” jab was supposed to fully protect them from.

In Massachusetts – basically the most Pfizer-loving state in the Union, with an impressive 77% of adults fully vaccinated – breakthrough infections currently make up about 40% of the state’s weekly caseload. And that figure has reportedly been going up since the state began tracking vaccine-linked transmission in late July.

For the sake of accuracy, we should point out that Gottlieb claimed that the “true” Delta wave about to rampage through Massachusetts and the rest of the East Coast will be bad, but not as bad as the (allegedly) “dense and severe” wave that hit the Unvaxxed South. Is Gottlieb aware that his cash cow injection doesn’t stop transmission?

And judging by the data coming out of Israel and other heavily vaccinated countries, it seems increasingly unlikely that vaccines are effective at preventing hospitalization.

Then there’s the problem of “no reliable data.” Before “approving” Pfizer’s vaccine (actually, they gave the green light to a different drug that is not even available in the United States) in late August, the FDA refused to hold a formal advisory committee meeting composed of independent experts to ensure full transparency with the public.

Kim Witczak, a drug safety advocate who serves as a consumer representative on the FDA’s Psychopharmacologic Drugs Advisory Committee, said that the decision meant that “we have no idea what the data looks like” regarding the vaccine’s potential benefits and pitfalls.

Witczak also noted that full approval was being granted on 6 months’ worth of data, even though clinical trials were supposed to last for two years. The limited data already suffered from the fact that most trial participants who received a placebo were later given the actual vaccine, making it a tad bit difficult to gauge efficacy and other aspects of the drug.

“There is no control group after Pfizer offered the product to placebo participants before the trials were completed,” Witczak noted, highlighting an often overlooked detail that has raised eyebrows as far back as February.

(We are honestly just splitting hairs at this point: a proper regulatory review requires a decade or more of careful observation to ensure there are no long-term side effects. You can’t really “expedite” this process.)

In the coming weeks, hospitals in the Northeast will fill up with teenagers suffering from permanent heart damage, 45-year-old Costco blobs with type 666 diabetes, and sclerotic octogenarians who are at risk of dying from a slight breeze. All of them will have been vaccinated, and all of them will be victims of the “True Delta Wave.” The former FDA chief said so.