Pentagon Confirms Its In-House Rebels Defected to the Syrian Army

Syrian fighters trained, armed and salaried by the Pentagon have indeed defected to the Syrian army. Last week there were reports of two separate groups of “Commandos of the Revolution” fighters, who share the al-Tanf base with the US military in southern Syria, crossing over and joining the loyalist camp. What I hadn’t realized however, is that there was also an official confirmation to that effect from US military spokesmen.

The US military confirmed “a handful of isolated defections” of defections, and also said the defectors were now trying to convince the remaining Revolutionary Commandos to switch sides:

US Army Col. Ryan Dillon, a coalition spokesman, told CNN that one of the defectors was actively attempting to recruit his former comrades and convince them to join the regime but added that those efforts were having no measurable success to date. Dillon would not say whether Russia or the regime were directly behind the recruiting effort.

The official told CNN that the leader of the recruitment effort is a former rebel sub-commander who has criticized the US forces at At Tanf and has promised would-be recruits positions in the regime’s armed forces as they clear their homelands in the Middle Euphrates River Valley. This has has prompted the US military to be concerned about more defections in the future given that the regime has blocked the coalition and its allies from advancing on that same area.

The reason why crossing over to the Syrian army is so tempting is easy to see. Many of these men are from ISIS-held Deir ez-Zor province but the US and rebel forces at al-Tanf are penned in. Since the lightning-fast Syrian advance to the Iraqi border on June 9th they no longer share a border with ISIS-held territory. Thus the fastest, and most realistic way for these men to return to their homes in eastern Syria is now with the Syrian army, rather than the Americans.

The Pentagon for its part fears further defections would undermine its already exceedingly shaky rationale for its unlawful presence in southern Syria:

He added the regime’s recruitment effort was assessed to have two objectives, building a force of local fighters and driving the coalition out of key real-estate in southern Syria. …

The second objective involves an attempt to weaken the coalition’s rationale for occupying At Tanf, allowing Moscow, Damascus and Tehran to pressure the US and its allies to leave the strategically valuable area.

By poaching leaders of the rebel group, the regime and its Russian and Iranian allies would be able to better pressure the US and coalition troops to vacate the strategic tri-border area near At Tanf, a US official familiar with the development told CNN.

For the record: unlike what the US official CNN spoke to claims there is nothing “strategic” about the part of southern Syria the US holds. Except for one refugee camp on the Jordanian border it is uninhabited, and is seperated from ISIS-held territory the US once planned to advance into by more than 150 kilometers of Syria held by its government. 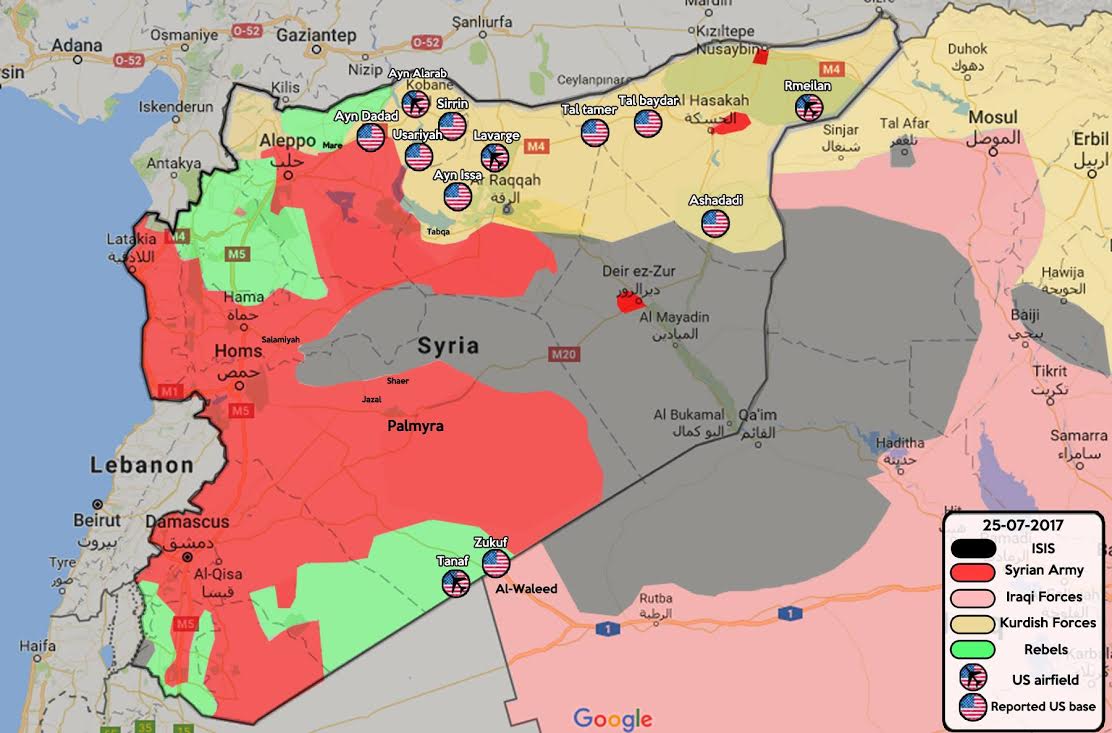