Unprecedented measures, only they're not working, the end of the Everything Bubble nears

Sunday at 5 p.m., the frazzled Fed announced in a statement that it slashed its policy interest rate by a full percentage point, to a target range between 0% and 0.25% for the federal funds rate and that it “expects to maintain this target range until it is confident that the economy has weathered recent events and is on track to achieve its maximum employment and price stability goals.”

It also slashed by a full percentage point to 0.25% the interest rate at its discount window, where banks can borrow from the Fed directly.

In the press conference following the announcement, Fed Chair Jerome Powel said for the umpteenth time that the Fed doesn’t see negative interest rates as appropriate – and that’s a good thing for the banks, because bank stocks have collapsed to multi-decade lows in negative-interest-rate Europe.

And while he was at it, Powell said that the FOMC meeting that was supposed to take place this Tuesday and Wednesday had been cancelled.

The also Fed announced $700 billion in QE-4 or QE-5 or whatever, promising to increase “over coming months” its holdings of Treasury securities by “at least” $500 billion and its holdings of mortgage-backed securities (MBS) by “at least” $200 billion. In the Implementation Notes, it specified that the Desk “conduct these purchases at a pace appropriate to support the smooth functioning of markets for Treasury securities and agency MBS.”

And this Treasury market the Fed is referring to has gone haywire. The 10-year Treasury prices fell all last week, with yields tripling in five days, from a historic low of 0.32% Monday morning to 0.98% late Friday, having briefly hit 1.02%. For the Fed that’s scary.

Upon the panicked Sunday afternoon announcement by the Fed, S&P 500 futures plunged 5% to hit limit down, and for now remain stuck at the limit down, which might make for, let’s say, an interesting Monday morning:

The whole Sunday afternoon maneuver, on top of the mega shock-and-awe maneuvers Thursday and Friday reek of sheer and outright panic – and they’re the opposite of being confidence inspiring. That stock futures plunged after the Fed had effectively put its biggest tools to work shows how obvious this panic is.

Here is Fed Chair Jerome Powell, upon seeing with his own eyes the plunge in the stock futures, as envisioned by cartoonist Marco Ricolli, exclusively for WOLF STREET: 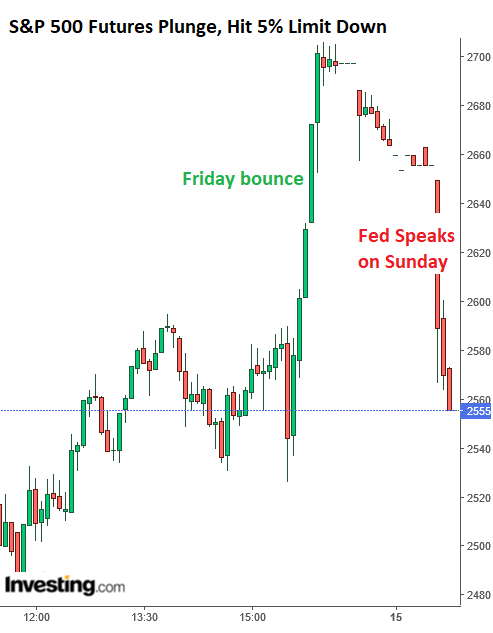 The Sunday afternoon surprise announcement comes on top of the mother of all money-printing repo-market and Everything-Bubble surprise shock-and-awe bailouts that it had announced and kicked off on Thursday during afternoon trading hours: A series of $500-billion term repos at least through April 13, amounting to $4.0 trillion in new money over the four-week period. Of this, it offered $500 on Thursday, and two $500 billion repo operations on Friday, for a total offer of $1.5 trillion. But hardly anyone showed up to get this repo cash.

These mega programs are on top of the smaller repo operations, the overnight repos that unwind the next day of up to $175 billion, and the $50-billion one-month repo on Thursday, and the twice-a-week $45 billion two-week repos, and the $60 billion a month in QE, now including Treasuries of all kinds and maturities.