Oops! Turns Out Ukraine Is in the Russian Sphere of Influence After All

Somebody is cutting and running

The White House has made it clear that not a single US soldier will die for Ukraine, is evacuating the Embassy, and has even told its citizens that if things go off they are categorically on their own since the US military will not risk evacuating them.

It wasn’t so long ago that we were hearing that Ukraine shares America’s values, needs to be supported as a plucky free nation standing up to Putin, and that Washington wants it as an Article 5 NATO member sometime in the indeterminate medium-term future.

Instead, we’re getting… a speedy and total American withdrawal before the first shot of the feared Russian counter-escalation has even been fired.

Talk is talk, but action is something else. The EU and NATO can promise all the eventual memberships in the world, but this shows that ultimately Russia cares enormously more about Ukraine’s orientation than the West does. Moscow has far more to lose and is far more invested. The American escape shows that no matter what EuroKiev and Washington may wish for, the Ukraine is in fact firmly in the Russian sphere of influence. And if Kiev is wise it is going to find a way to live with this fact that has been so clearly demonstrated to it and for its benefit.

If Zelensky is smart he needs to quickly get on the air and say a few words about the ethnic kinship of the Ukrainian and Russian peoples, the unacceptability of resolving the Donbass question by force, and he needs to release the pro-Russian Medvedchuk and reverse his crackdown on the opposition media.

The Russian buildup to 90-100 battalion tactical groups has already shown that militarily the Ukraine is Moscow’s playground where not even the world’s superpower dares to tread. A semi-competent leadership would take that military balance *reality* into account and pay it proper respect. (You don’t see Belgrade begging for Russian troops and missiles, it is ecstatic if the Empire just allows it to remain nominally neutral.)

The buildup has also, for the time being, frozen the march of never-ending new sanctions against Russia. The Lithuanian/Polish/neocon cretins wanting to see more sanctions “before Russia invades” have been shut up. The Empire realizes that passing all sanctions would also make it lose all the leverage that it has. It finally gets that it must keep some dry powder, or else the Russians might as well go out and get hung as a lamb for a sheep.

Thus so far the Russian buildup has had two positive consequences for Russia (along with some negative ones). I don’t know if that is enough. But it is within Kiev’s power to ensure that it is enough, by allowing itself to be bent just a little and dish out some appeasement. It’s not as if Kiev isn’t using its force dominance against Ukraine’s own pro-Russians and peaceniks, and thus doesn’t have any great moral standing here.

The sole alternative the Americans have to offer are fantasies about “insurgency” and “the biggest Molotov cocktail party in the world” — in which the Americans will participate only as distant voyeurs and by sending the Ukrainians explosives. 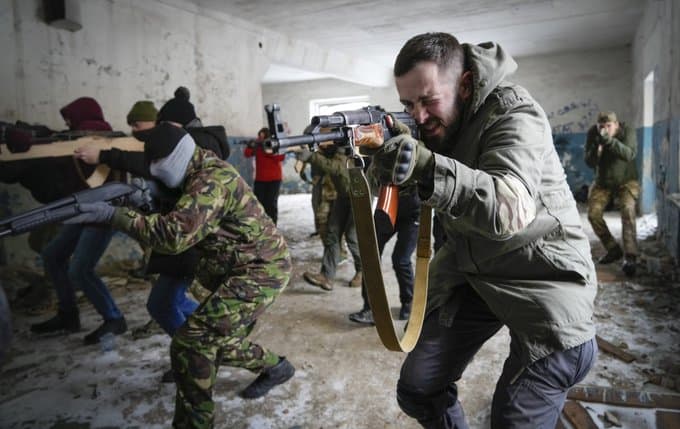 What’s the better deal there? The “Russian” alternative is for Zelensky to just fulfill his damn election promises, and get to work on his pro-economy, pro-talks program on whose strength he swept the election. He may want to consult his financier Kolomoisky on that:

“If Zelensky listens to [the west] and doesn’t make his own appointments he’ll end up like Poroshenko. He’ll have the same poll numbers — 5, 10, or 15 instead of 73 per cent,” he said.

“This is your game, your geopolitics,” he said. “You don’t care about Ukraine. You want to hurt Russia, and Ukraine is just an excuse.”

“They’re stronger anyway. We have to improve our relations,” he said, comparing Russia’s power to that of Ukraine.

“People want peace, a good life, they don’t want to be at war. And you” — America — “are forcing us to be at war, and not even giving us the money for it.”

“You all won’t take us” in the alliance, Mr. Kolomoisky said in the interview, in a conference room at his offices in Kiev. “There’s no use in wasting time on empty talk. Whereas Russia would love to bring us into a new Warsaw Pact.”

Instead, he said, the United States is simply using Ukraine to try to weaken its geopolitical rival. “War against Russia,” he said, “to the last Ukrainian.”

“We’ll take $100 billion from the Russians. I think they’d love to give it to us today,” Mr. Kolomoisky said. “What’s the fastest way to resolve issues and restore the relationship? Only money.”