An excellent reason to blow up people

The first drone strike of Barack Obama’s presidency occurred just three days after he was sworn into office.

In his new book, “A Promised Land,” Obama reflected on the task of ordering such killings, stating that he “took no joy” in doing so.

“In places like Yemen and Afghanistan, Pakistan and Iraq, the lives of millions of young men…had been warped and stunted by desperation, ignorance, dreams of religious glory, the violence of their surroundings, or the schemes of older men. They were dangerous, these young men, often deliberately and casually cruel. Still, in the aggregate, at least, I wanted somehow to save them — send them to school, give them a trade, drain them of the hate that had been filling their heads,” Obama wrote.

“And yet the world they were a part of, and the machinery I commanded, more often had me killing them instead,” the former president added.

Obama said his first chief of staff, Rahm Emanuel, was “obsessed” with keeping track of what was essentially a kill list, or a list of top terrorist targets. The former president said Emanuel had “spent enough time in Washington to know that his new, liberal president couldn’t afford to look soft on terrorism.”

“I took no joy in any of this. It didn’t make me feel powerful. I’d entered politics to help kids get a better education, to help families get healthcare, to help poor countries grow more food — it was that kind of power that I measured myself against,” Obama wrote. “But the work was necessary, and it was my responsibility to make sure our operations were as effective as possible.”

Obama inherited the war on terror at a time when Americans were growing weary of foreign conflict and didn’t want to see more US service members in harm’s way, but still wanted the US to combat terrorism. Drones offered an ostensible solution to this quagmire.

“As al-Qaeda had scattered and gone underground, metastasizing into a complex web of affiliates, operatives, sleeper cells, and sympathizers connected by the internet and burner phones, our national security agencies had been challenged to construct new forms of more targeted, nontraditional warfare — including operating an arsenal of lethal drones to take out al-Qaeda operatives within the territory of Pakistan,” Obama said.

Though Obama sought to eradicate many of the more aggressive and controversial aspects of the Bush administration’s approach to counterterrorism, such as the use of torture, he’s been heavily criticized by human rights groups and foreign policy experts over his major expansion of the US drone war (which his successor exacerbated even further).

Over the course of the war on terror, the US has targeted and killed suspected terrorists in a number of countries it is not technically at war with. On top of this, drone strikes have often resulted in civilian casualties. America’s use of drones in the war on terror has therefore raised many legal and ethical questions.

Obama stirred the pot even further in 2011 when he ordered a drone strike that killed a US citizen in Yemen associated with al-Qaeda named Anwar al-Awlaki.

Awlaki’s 16-year-old son, Abdulrhaman al-Awlaki, was killed in another drone strike ordered by the Obama administration just two weeks later. The teenager was also a US citizen, and his death was dubbed a mistake by US officials at the time.

Obama responded to some of the criticism he faced by pledging greater transparency and putting safeguards in place to protect civilians, signing an executive order in July 2016 to that effect. Critics said the order didn’t go far enough. President Donald Trump abandoned many of these changes.

Due to the covert nature of drone strikes and the remote areas they often occur in, the number of civilian casualties they’ve led to has varied depending on the source. An official tally released by the Obama administration in 2016 was far lower than other counts from independent watchdogs and observers.

A total of 563 strikes, primarily by drones, were conducted in Pakistan, Somalia and Yemen during Obama’s two terms, according to the Bureau of Investigative Journalism, killing between 384 and 807 civilians. There were 10 times more covert air strikes as part of the war on terror under Obama than Bush, according to the Bureau, which has tracked US drone strikes for years.

Top foreign policy experts have contended that the use of drones and drone strikes by the US does not advance its broader counterterrorism goals and serves as a form of recruitment for terrorist groups. In 2010, a man named Faisal Shahzad attempted to bomb Times Square in New York City, later citing drone strikes as his inspiration for the failed bombing. 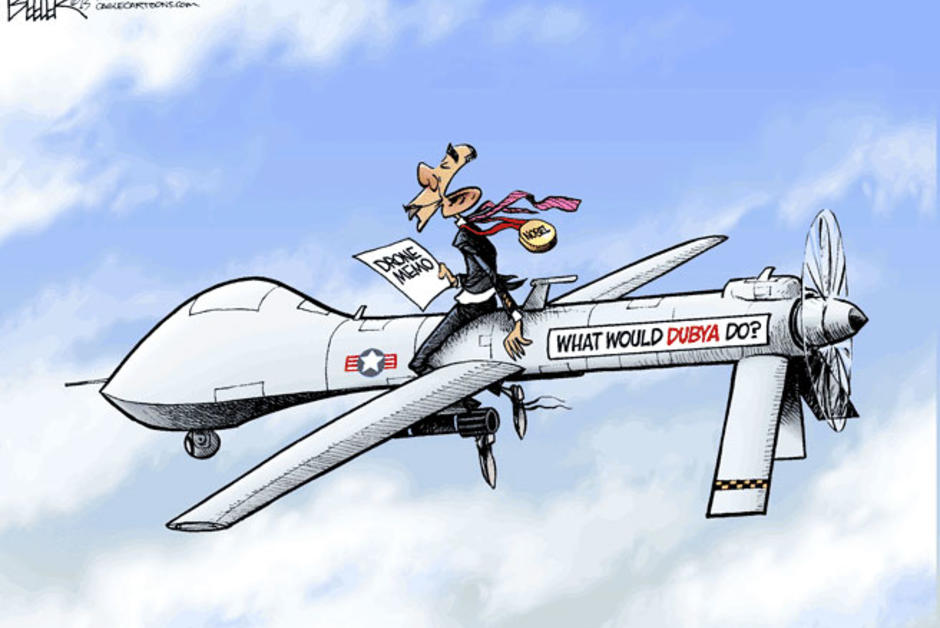