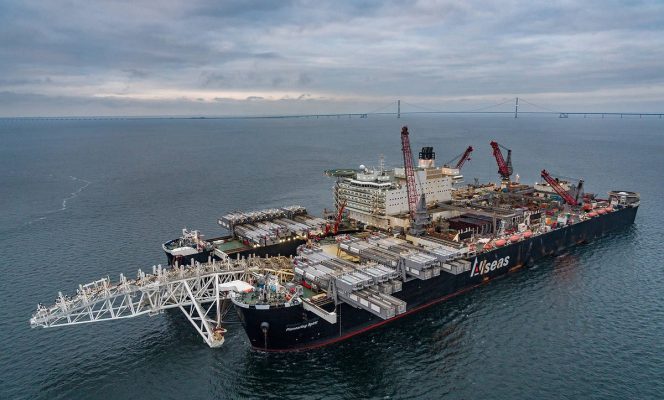 After months of bitter wrangling, the government of Denmark gave the go-head for Russia’s Gazprom to build the Nord Stream 2 pipeline through its territorial waters [actually through its exclusive economic zone] – the last country on the route between Russia and Germany to grant construction permissions.

The announcement comes after president Vladimir Putin talked to German Chancellor Angela Merkel on October 30 and suggested making a “package deal” that links the disputed payment of $3bn award by Gazprom to Ukraine together with a temporary transit deal for Russian gas via Ukraine to its European customers.

The Danish Energy Agency (DEA) said on October 30 it had issued a permit allowing Russia’s state-owned Gazprom to lay a 147-km section of the pipeline through Denmark’s exclusive economic zone, southeast of the island of Bornholm.

The decision comes as a victory for Gazprom, which has been lobbying the government but the fight has delayed the completion of construction, as the pipeline was due to come online at the start of 2020 to give Russia an alternative export route that would have allowed it to by pass Ukraine, with whom a gas transit deal expires on January 1, 2020.

The delay in the completion of Nord Stream 2 means that Russia needs to negotiate a temporary transit deal with Ukraine for 2020, but as bne IntelliNews reported talks are going nowhere. Gazprom met with Ukraine’s national gas company Naftogaz in Brussels earlier this week, hosted by Brussels, to try and negotiate a new transit deal, in a meeting that ended in the trading of barbed remarks on Gazprom’s failure to pay Naftogaz $3bn awarded to it as damages by an arbitration court in Stockholm.

Russia is eager to defend and expand its share of Europe’s gas market in the face of EU efforts to diversify supply. It also comes as a blow to the US, which has fiercely opposed Nord Stream 2 while promoting its own LNG as an alternative source of gas for Europe. Washington has sought to impose sanctions on the project, which even if enacted are likely to come too late to make an impact.

Gazprom secured all other necessary permits to run Nord Stream 2 through Russian, Swedish, Finnish and German waters more than a year ago. It first filed applications with Danish authorities back in 2017. With more than 2,100 km of its 2,400 km of pipes now in place, Gazprom may still have enough time to complete Nord Stream 2 by the end of this year as originally planned, say experts.

Gazprom’s other export pipeline projects are also coming to completion. The southern route Turkish Stream is complete and Gazprom announced last week that it has started loading the pipeline with gas. And on October 31 the Russian gas giant announced that the Power of Siberia pipeline that links Russia to China’s northwest territories has also been completed and is about to be launched. Nord Stream 2 is the last of a trident of new pipelines that will carry Russian gas to Europe and effectively cutting Ukraine  out of the transit business.

The Nord Stream 2 operating company, a subsidiary of Gazprom, said in a statement welcoming Denmark’s approval that it would begin preparatory works on its Danish section within weeks. But how quickly it can commission the pipeline and bring it to its peak flow capacity of 55bn cubic metres per year is another matter.Commissioning of a major gas pipeline can take months.

And timing is critical.

Gazprom devised Nord Stream 2 as means of redirecting its European gas shipments away from Ukraine, currently the main transit route for Russian gas sales to the continent carrying circa 85bcm of the circa 200bcm Russia delivers to Europe each year.

Its long-term transit contract with Ukraine’s Naftogaz is due to expire at the end of this year, and Moscow had hoped that Nord Stream 2 would be ready by then so it could divert as much gas as possible away from Ukraine before agreeing new transit terms. Negotiations between the pair are ongoing, with little sign of progress.

Russia may also have to send some supplies via Nord Stream 2 that would otherwise have been pumped through its Nord Stream channel, following an EU court ruling limiting Gazprom’s access to Germany’s OPAL pipeline that handles Nord Stream’s gas.