No, China Almost Certainly Did Not Deploy “120 Troops to Venezuela”

The troops part originates from nothing more than literally just a handful of Twitter posts which combined photographs of the Chinese cargo plane at the Caracas airport from a few days ago, with one other photograph of a couple of Chinese and Venezuelan soldiers posing together at some unknown location, but definitely not at Caracas airport. 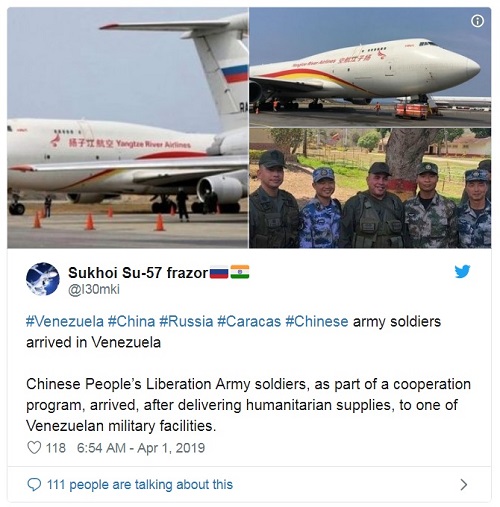 The latter photograph indeed first appeared anywhere on the internet only four days ago, but that doesn’t mean it could not have been taken months, or years ago. Moreover it shows just three Chinese soldiers, not “over 120” (Masdar) and not “tens” (Muraselon).

What we don’t have is footage of Chinese troops disembarking in Caracas like we had for the Russians. And it’s not like we don’t have footage of the unloading, we have plenty, it’s just that no troops are shown getting out on any of it.

Moreover China and the US are engaged in trade talks right now that China hasn’t given up on yet — to the contrary, Beijing as a favor to Trump just ordered 828,000 tons of American soybeans, and banned all non-prescription fentanyl products. Surely Xi wouldn’t be undermining his own goodwill gestures like this before the talks are over?