New Study: Millennials Think Their Risk From COVID-19 Is Exponentially More Than the True Threat

"The younger the age of the respondent, the more the inpidual seemed concerned about the virus being deadly to them"

There is no vaccine, effective treatment, or herd immunity for the virus of panic and fear sown by the media that is propagated straight to people’s brains from their smartphones. And unlike with coronavirus, the young are more seriously afflicted with this intractable disease than seniors, according to a new study.

Four researchers published a working paper for the National Bureau of Economic Research studying people’s perceived personal health risks associated with COVID-19. The most striking result of their survey of 1,500 Americans from May 6 to May 13 is that the younger the age of the respondent, the more the inpidual seemed concerned about the virus being deadly to them – the exact inverse of the true threat assessment of the virus.

It’s reflective of a generation that is inundated with Apple, Google, and Yahoo’s sensational news headlines on their phones and, unlike their parents and grandparents, have no minds of their own to decipher the information and interpret it with the proper context.

When asked by the four researchers, who hail from Harvard, Oxford, and Università Bocconi, out of “1,000 people very similar to you” how many would die from COVID-19 over the next nine weeks, the median estimated guess by respondents aged 18-34 was 20, or 2%. In other words, the average Millennial thought that 2% of everyone like them would die within nine weeks from the virus. In contrast, in contrast, the respondents aged 70 years or older, which is exponentially more at risk, asses their risk of dying at about 1%.

What is the infection fatality rate (IFR) for younger people? The CDC estimates a 0.05% IFR for everyone in the age cohort of 0-49. Other estimates based on Spain serology tests broken down by age suggest an even lower IFR for those 18-49.

But that is only the risk once someone contracts the virus. When you couple the chance of not getting the virus together with the chance of not dying from it once infected, the rate is even lower. Four infectious disease doctors in Canada estimate that the inpidual rate of death from COVID-19 for people under 65 years of age in Canada is six per million people, or 0.0006% – 1 in 166,666, which is “roughly equivalent to the risk of dying from a motor vehicle accident during the same time period.” Those numbers are even lower for people under 35.

In other words, the respondents in this study overestimated their risk of dying by at least a factor of 3,000.

According to the CDC, the IFR for those over 65 is 1.3%, although it is heavily skewed by nursing home deaths in the numerator. For seniors in better health, the numbers are much lower. Thus, the senior respondents in the survey are much closer to reality in their thinking.

According to the CDC, there have been 944 COVID-19 deaths among those aged 15-34. And that is with a liberal definition of a COVID death that has included young people who died of alcohol poisoning, gunshots, and drug overdoses, which, incidentally, are increasing because of the panic and social isolation, which in itself is exponentially disproportionate to the threat of the virus itself.

Now consider the top causes of death for youngsters, courtesy of a table published by Avik Roy last month. In 2016, there were 37,879 deaths by unintentional injury among those 18-34, which obviously is very much influenced by car accidents. That is 40 times the number of deaths from the virus. There were 10,548 deaths by homicide, more than 11 times greater than from the virus.

How many Millennials do you know who think twice before getting into a car or engaging in a fun-seeking activity that could result in injury or death? And remember, while accidents are more likely to occur among reckless people, they can and do end lives of all people. The few virus deaths for those under 35, on the other hand, are almost all among those with specific serious heart conditions or comorbidities.

The answer is very simple. People’s phones are not blowing up with news of people dying in car crashes every second. Smartphones and the information that pings their users are like the Bible for this generation of American youth. The same source of their anxiety over catching the virus is the same source that made them temporarily suspend that anxiety to protest in the streets in large crowds. They are the same people who believe black youth are more likely to be killed by police than by gang members. For Millennials, the media is like a game of Simon Says. It’s an amazing contrast from the youth of the 1960s who wore T-shirts saying, “Question authority.”

This disproportionate degree of panic and fear sown by herd mentality and magnified by technology is not cost-free. When you have young people thinking their risk of dying is thousands of times greater than the actual threat, they can resort to extreme behavior that is more dangerous than the virus. Perhaps this is why drug overdoses are spiking in some states.

This point was driven home in a paper co-authored by D.A. Henderson, the former dean of Johns Hopkins School of Public Health, who is widely credited with helping to eradicate smallpox. In that 2006 publication from Johns Hopkins, Henderson and three other authors note that lockdowns would produce so many negative effects that “this mitigation measure should be eliminated from serious consideration.”

Perhaps the most destructive element of lockdown is the panic and fear that such severe measures help confirm, in this case, wrongly so, in the minds of the young and impressionable. As the paper concludes, “Experience has shown that communities faced with epidemics or other adverse events respond best and with the least anxiety when the normal social functioning of the community is least disrupted.”

In other words, we need to flatten the fear.

People are beginning to think that “inpidual” is an actual word…

vast studies demonstrate that amerikans r becoming more self loathing, grandiose, insecure, antagonistic, childish (narcissistic) and more stupid—this is why these idiots admire fascists like sanders that supported 12 regime changes, voted for all military appropriations, described Hugo
Chavez as a dead dictator and John Mc
Cain as ahero===despicable fascist cretin…and amerikans believe social change is possible in the just as it is society (Baudrilliard)

“The younger the age of the respondent, the more the inpidual seemed concerned about the virus being deadly to them”

This is perfectly EXPECTED! 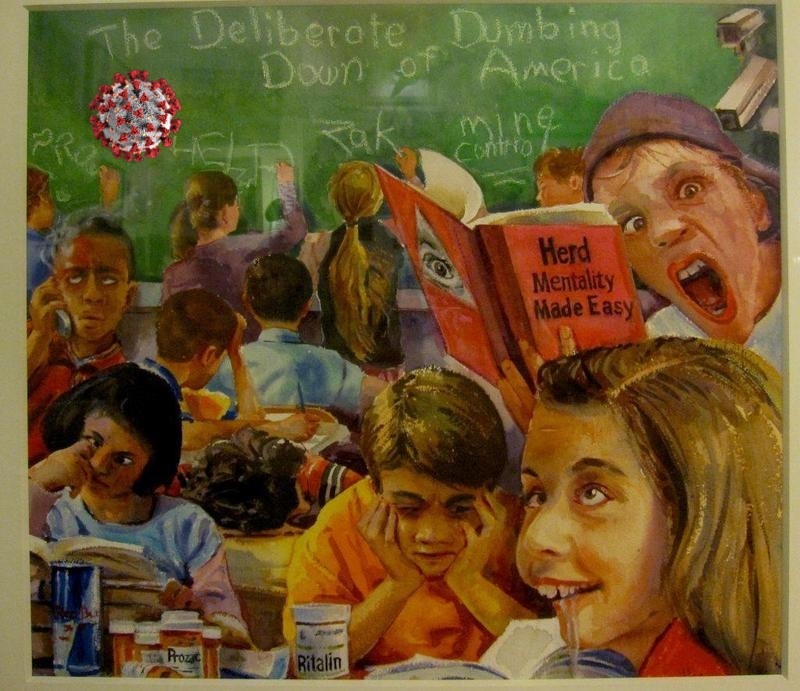 It’s all so exciting. Just like a movie or somethin’. Oprah said so.