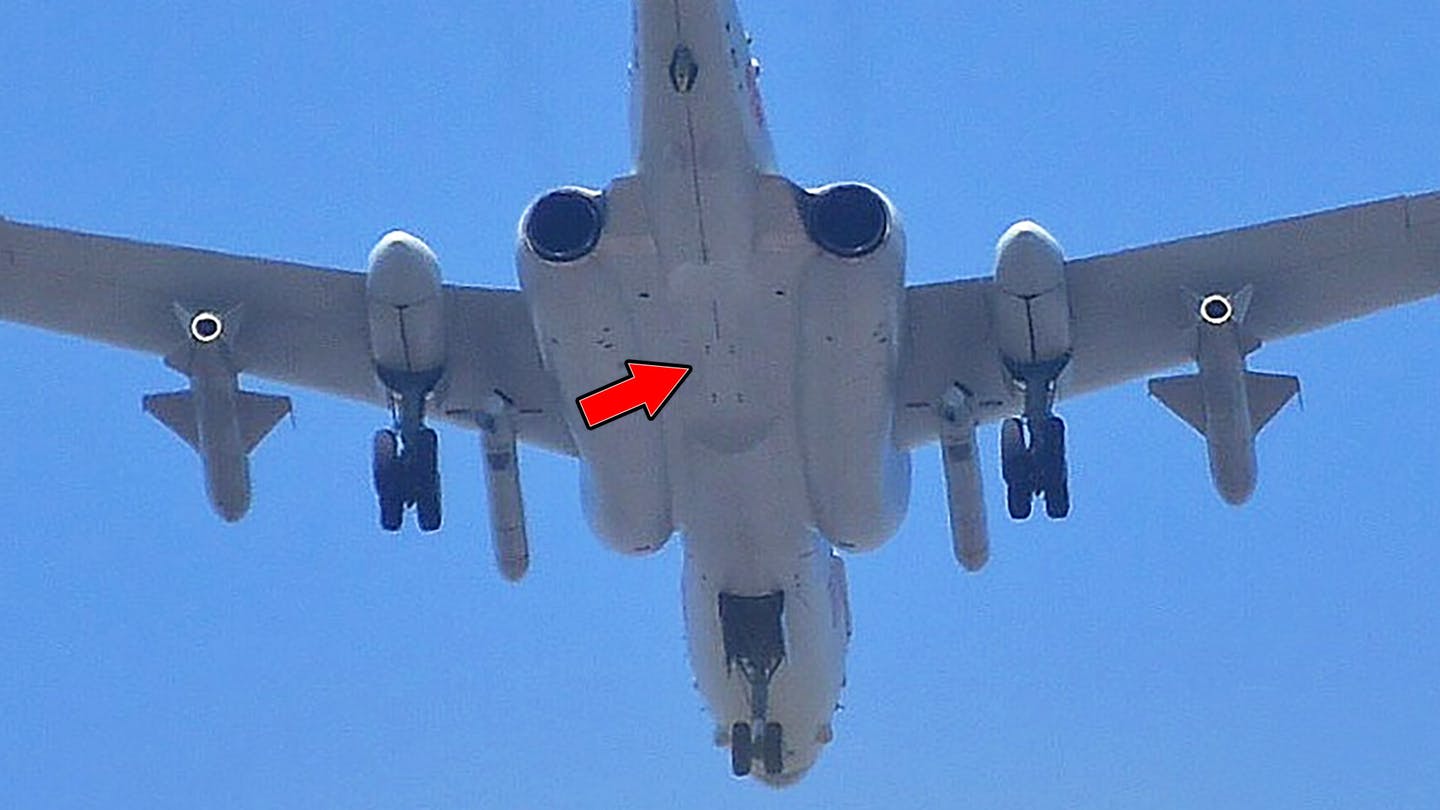 Pictures have emerged confirming that the newest variant of China’s People’s Liberation Army Air Force’s Xian H-6 bomber, the H-6N, does indeed have a semi-recessed area with a hard point for a very large big under its fuselage. This is reportedly meant to accommodate an air-launched derivative of the DF-21D anti-ship ballistic missile giving the aircraft an impressive stand-off capability against large enemy warships, especially aircraft carriers.

A trio of H-6Ns has been seen flying over Beijing practicing ahead of a massive military parade that will be part of ceremonies to mark the 70th anniversary of the founding of the Communist state on Oct. 1, 2019. Experts say that there at least four of these aircraft presently assigned to a People’s Liberation Army Air Force (PLAAF) bomber brigade in China’s Central Theater Command (CTC) region. Other pictures of the parade preparations have already shown that there will be a number of significant reveals during the procession.

Reports about the H-6N and its ballistic-missile launching mission first began to emerge in 2017. Xi’an Aircraft International Corporation’s H-6, a derivative of the Soviet-era Tu-16 Badger, has been the centerpiece of China’s bomber force since the 1970s.

In 2009, the H-6K variant, a significant redesign from the original aircraft optimized as a carrier for long-range anti-ship and land-attack cruise missiles, entered service. The H-6N is a further outgrowth of this earlier missile carrier version.

The most notable change between the N and K is the complete elimination of the bomb bay on the N and the addition of semi-recessed area with a hard point for a large missile. This is similar in some general respects to the ability of Russia’s Tu-22M Backfire bombers can carry a single Kh-22 or Kh-32 anti-ship cruise missile in a semi-recessed mount under its central fuselage.

There are no pictures from the parade preparations that show the H-6Ns carrying a payload and some of them appear to have a plug installed that gives the fuselage its normal profile when a missile is not loaded. So, it remains unclear what type of weapon, or weapons, the Chinese intend to employ on these aircraft.

Previous reports have indicated that an air-launched derivative of the DF-21D anti-ship ballistic missile, reportedly called the CH-AS-X-13, will be the primary weapon for the H-6N. A publicly released U.S. Defense Intelligence Agency (DIA) report has said the standard DF-21D has a range of more than 930 miles when ground-launched.

In 2018, The Diplomat reported, citing anonymous sources, that this new missile, which uses lightweight composite materials would have a range of more than 1,860 miles. Air-launching the weapon could also help increase its range by eliminating the need to first boost tens of thousands of feet in the air.

The DF-21D features a maneuverable, conventionally-armed reentry and the CH-AS-X-13 could leverage its basic design. The existing ground-launched missile reportedly has a limited ability to locate and zero in on a particular target during the terminal phase of flight using radar, as well as possibly infrared sensors, on the reentry vehicle. It may also be able to course-correct during the mid-course portion of its flight based on the information it receives from other sources via data link.

It is unclear whether or not the CH-AS-X-13 will carry a conventional or nuclear-armed warhead and it may be dual-capable. “China is developing two air-launched ballistic missiles, one of which may carry nuclear weapons,” U.S. Army Major General Robert Ashley, head of DIA, said in 2018. He had also made a virtually identical comment in 2017. A nuclear warhead would reduce the need for especially precise targeting and could make the weapon useful for taking out larger groups of targets at once, including entire U.S. Navy carrier strike groups.

The CH-AS-X-13 will also likely leverage China’s increasing experience with long-range ballistic weapons with maneuvering warheads, in general, which is also a product of efforts to help defeat any potential missile defenses. It’s worth noting that the People’s Liberation Army Rocket Force (PLARF) already operates the larger DF-26 intermediate-range ballistic missile (IRBM), seen in the video below, which also reportedly has anti-ship capabilities. In 2017, China also revealed a version of the smaller, short-range DF-16, the DF-16G, with a maneuvering warhead.

Last year, state-owned China Aerospace Science and Industry Corporation (CASIC) showed off a new short-range ballistic missile specifically for the anti-ship role, known as the CM-401, at the biennial Zhuhai Airshow, as well. All told, it could turn out that the H-6N may eventually be able to use its large, semi-recessed mounting arrangement to carry a number of different air-launched ballistic weapons, and potentially future hypersonic weapons, in the coming years.

The bomber’s ability to carry over-sized payloads may ensure it remains a useful tool in the PLAAF arsenal even as newer stealthier bombers begin entering service in the future. The U.S. Air Force similarly intends to keep flying its aging, Cold War-era B-52 bombers for decades to come for this very reason. Air-launched ballistic missiles are also becoming an increasingly popular concept around the world.

The H-6N also prominently features an aerial refueling probe on its nose, which could further expand its flexibility and reach, especially when it comes to engaging targets at the very edges of areas China claims as its integral national territory, including in the South China Sea, and beyond. The aerial refueling capability may also just be necessary to ensure that the aircraft can lug the weapon to the appropriate altitude and launch point.

Whatever the case, the H-6N has the potential to be another formidable addition to China’s already extensive anti-access and area denial capabilities, especially in the South China Sea. Just in January 2019, the PLARF conducted drills that appeared intended to demonstrate China’s ability to conduct extremely long-range anti-ship attacks on potential opponents in the South China Sea. Then between June and July, there were reports that Chinese forces conducted live-fire drills that involved firing ballistic missiles into that region, further underscoring the threat.

In addition, China’s ability to detect and track naval threats, as well as potential opponents in the air, under the water, and in space, are rapidly improving, as are its command and control capabilities. When it comes to spotting ships, the Chinese can increasingly call on manned and unmanned surveillance aircraft, as well as shore-based assets, including over-the-horizon radars. This provides the kind of network essential for long-range anti-ship ballistic missile strikes.

In July, weeks after the Chinese missile exercises, there was an unconfirmed report from Taiwan’s Up Media that one of the PLAAF’s Xianglong, or Soar Eagle, high-altitude, long-endurance (HALE) drone had shadowed the U.S. Navy’s Ticonderoga-class cruiser USS Antietam as it sailed through the Taiwan Strait. Soar Eagle is just one of a number of HALE unmanned aircraft that the Chinese have been developing in recent years.

With regards to the H-6N and its weapon loadouts, we may learn more during the Oct. 1 parade, especially if one of the aircraft flies over onlookers in Tiananmen Square carrying a payload of some kind. With this official debut, we will almost certainly be seeing more of these missile carriers in various settings, including training exercises, that will help illuminate more details about its exact capabilities, as well.