US out to frustrate Russian-Turkish relations, Putin continues to play dumb

Editor’s note: It was clear to careful observers at the time that the shoot down of the Russian Su-24 in November 2015 on the Syrian-Turkish border was a Turkish ambush which had been orgnized well in advance (possibly with US AWACS help) and must have been ordered from the top.

However, to pave the way for the thaw in Russian-Turkish relations after the attempted coup in Turkey in 2016 (when Putin surprisingly stood by his side but Obama did not) Erdogan opted to pretend he had nothing to do with the shoot down, and Putin opted to pretend to believe that.

Now a NATO document leak — perhaps coming from Americans looking to frustrate the Russian-Turkish detante — irrefutably confirms this is an absurd proposition.

For its part the Kremlin continues to insist it believes Erdogan. The calculation of the Presidency is that Erdogan’s Turkey is worth more than satisfaction for the death of one serviceman. The military for its part disagrees vehemently but can’t do much about it.

Turkish military documents obtained by Nordic Monitor confirm that President Recep Tayyip Erdoğan instructed the Turkish Air Force to shoot down a military aircraft that was approaching the Turkish-Syrian border  in 2015.

Briefing notes used by Maj. Erkan Ağın, legal counsellor at General Staff headquarters, in a NATO meeting to inform participants of the legal aspect of the case revealed Erdoğan’s key role in the incident. According to the notes, Erdoğan declared that “every military element approaching Turkey from the Syrian border and representing a security risk and danger will be assessed as a military threat and treated as a military target.”

On November 24, 2015 a Russian Sukhoi Su-24M was struck by Turkish F-16 fighter jets near the border with Syria, close to where Turkey’s Hatay and Syria’s Latakia provinces meet in mountainous terrain. The downing of the Russian jet caused a diplomatic row between the two countries, with Russian President Vladimir Putin calling it “a stab in the back,” until Moscow and Ankara agreed to restore relations in June 2016.

Although Erdoğan and other Turkish leaders had initially defied Russian threats and vowed to act again in line with the rules of engagement if another violation were to take place in the air, they later toned down the rhetoric.

Following the agreement between Moscow and Ankara on rapprochement, Turkey’s ruling Justice and Development Party (AKP) members started claiming that the government did not order the Turkish Air Force to down the Russian jet but rather maintained that the pilots acted on their own.

The two pilots were accused of shooting down the Russian jet at their own initiative and were arrested in the wake of a coup attempt on July 15, 2016.

A slide from the presentation of Maj. Ağın at the NATO meeting:

Slide revealing the flight route of the Russian Su-24M shot down by Turkish jets:

According to the document “two SU-24 type jets of unidentified national origin” were detected by Turkish radar on November 24 at a location close to the Turkish-Syrian border. They continued executing their mission by the border 30 minutes prior to the time of the violation and were repeatedly warned via emergency channels.

In his presentation Ağın also claimed that both jets violated Turkish airspace east to west by 1.5 miles in depth and 1.36 miles in length for 17 seconds. They were then warned 10 times by the Turkish ground center over a period of five minutes via “emergency guard” channels. Since no response was received and the tracked behavior was not changed, one of the Russian jets was engaged by the Turkish F-16s, which were stationed as a “combat air patrol” in the region. While one Russian aircraft left, the other remained in Turkish airspace, he said.

Despite the fact that Syrian helicopters had violated Turkish airspace five times without being attacked since 2011, Syria shot down an unarmed Turkish RF-4E military aircraft without warning in international airspace over water after accidentally entering Syrian airspace, Ağın noted. In accordance with the “engagement rules” declared after the downing of the Turkish jet, “combat air patrols” were deployed in the region 24/7, and jets were instructed to intercept any aircraft that came close to Turkish airspace.

Furthermore, Maj. Ağın argued that Turkey had warned Russian authorities many times about its perception of the situation in the region before the incident, saying: “Also, RF [Russian Federation] authorities have been duly notified of our RoEs [rules of engagement] at all levels and were repeatedly informed that our RoEs required pilots to use force against all unidentified aircraft violating Turkish airspace from Syria. In particular in 2015, the RF delegation was requested to inform their air crews not to come closer than 5 miles of the Turkish border and have them constantly listen to the VHF Guard Frequency.”

After the abortive coup, Maj. Ağın and other members of the legal advisory department were arrested and sentenced to life in prison on dubious coup plotting and terrorism charges.

Furthermore, the Sabah daily, a mouthpiece of the Erdoğan regime, accused the same department of attempting to insert new definitions such as “war crimes” and “crimes against humanity” with reference to the Rome Statute into a draft of the military penal code in 2014. The daily alleged that the draft, if approved by parliament, would limit the use of force by the Turkish military against terrorist organizations and pave the way for the trial of President Erdoğan at the International Criminal Court in The Hague.

Sixty-one-page presentation by Turkish officer on legal matters surrounding the downing of the Russian jet: 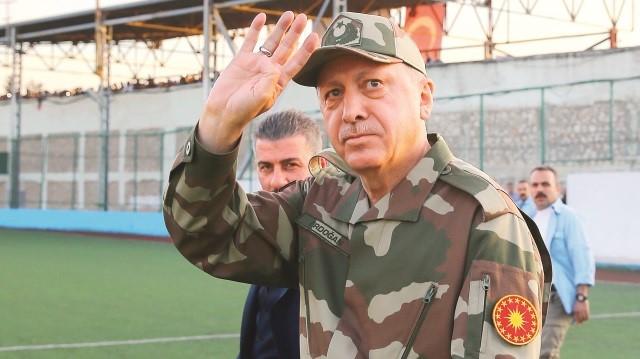