I think I’ve mentioned before that one of the weird contradictions of current Western reporting is the fact that it simultaneously maintains that Russia is a) the chief worldwide spreader of anti-vaccination propaganda, and b) devilishly undermining the world by trying to persuade people of the merits of its Sputnik-V anti-covid vaccine. Those damn Russians – anti-vax and pro-vax all at the same time!

An example of the latter meme is the cover article of this week’s copy of The Spectator which claims that ‘Nations which are hungry to compete with the West — and especially America — are using their homegrown coronavirus vaccines as a way of gaining influence. They are exchanging their vaccines for loyalty and acts of public obeisance.’ By ‘nations’, author Cindy Yu means Russia and China, but what demands of ‘loyalty and public obeisance’ these two are making in exchange for the vaccine, Yu doesn’t tell us.

For good reason, since, as far as I can tell, there isn’t any evidence to support her claim. But it’s clear that Yu thinks that the fact that Russia has developed a successful covid vaccine and is exporting it around the world is a bad thing.

Which when you think about it is kind of odd. Providing vaccines against a worldwide plague is bad!! Saving lives is bad!! Bad, bad, bad. Indeed, it’s proof of malicious intent.

But note the hypocrisy here. When Western states, notably the UK and USA, export vaccines, that’s not about geopolitics at all. That’s just goodness. After all, says Yu, ‘If there were a genuine choice in a real market, the West would win: polls show Pfizer and AstraZeneca are preferred to Sinovac and Sputnik.’

Well, polls are one thing – vaccine effectiveness is another. The Chinese Sinovac vaccine doesn’t seem to be the best, but Russia’s Sputnik V is proving to be very good at preventing covid, plus it’s cheap, and you don’t have to keep it frozen at very low temperatures. In a free market it might do very well.

So, basically, the Spectator article is just fact-free fearmongering, or more accurately hate-mongering.

Yet, it wasn’t always like that. There was a time, not so long ago, when the Spectator could produce covers like this one with the title ‘Power Games: Paul Robinson defends the Russian leader’ (which wasn’t entirely accurate, as I didn’t defend Putin, just criticized the EU for demanding that Russia continue to subsidize gas exports to Ukraine while simultaneously demanding that it end subsidies for domestic Russian users).

That was back when Boris Johnson edited the magazine, a time when a multiplicity of different opinions were permitted. After he left, however, the tone changed, and since then, the Speccie’s covers have descended into repeated rabid Russophobia. 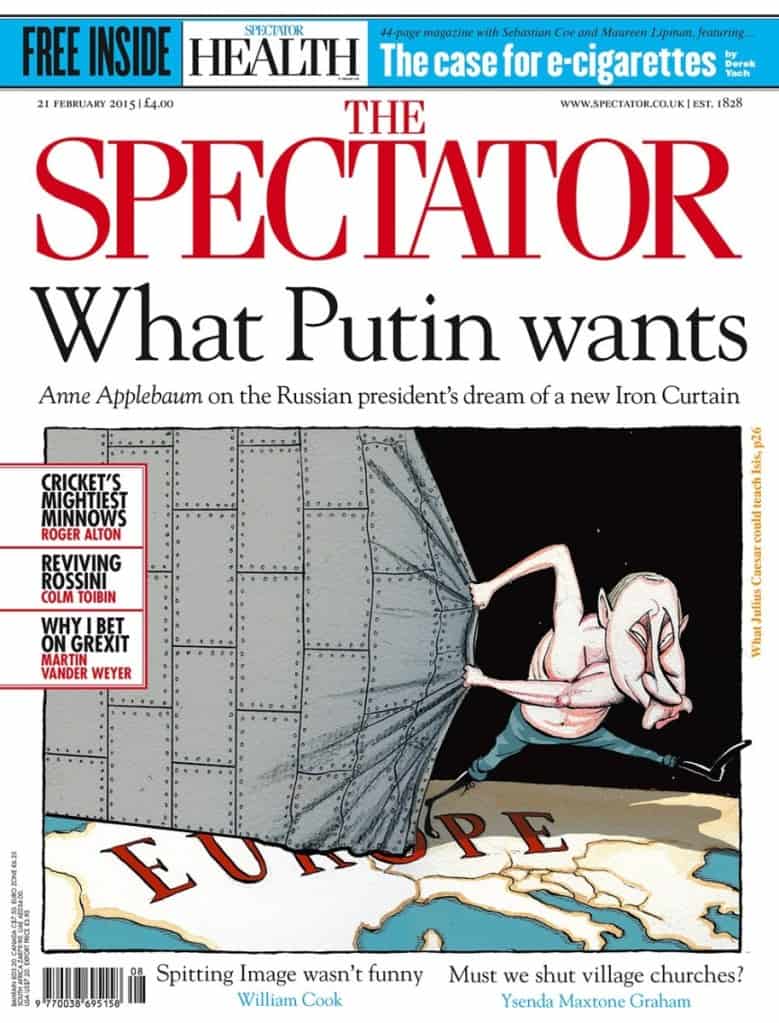 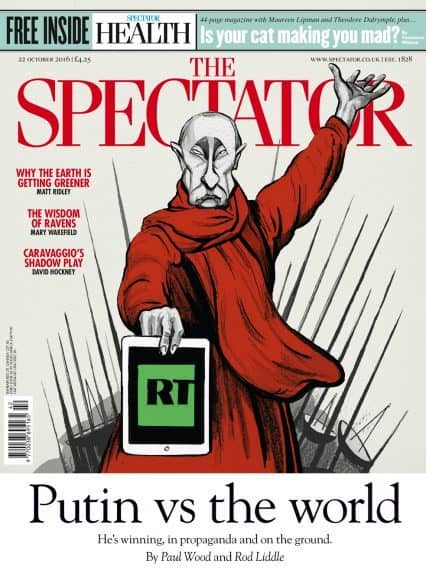 It’s kind of interesting that the last of these contains a reference to RT. For it’s no coincidence, I think, that a number of those who used to write regularly for the Spectator under Boris have now ended up at RT – I can think of myself, Neil Clark, and John Laughland for starters, but there may be others. We have very different political views – Clark is too far left for my liking, and Laughland much too far right. But the fact the Spectator once housed us all was a sign of genuine openness.

Moreover, it’s not as if we’ve changed our line. We’re still saying exactly the same things we were saying when writing for the Speccie. Back then, when they were being published by the guy who is now Prime Minister of the UK, those views were acceptable. But now, because exactly the same opinions appear on RT, they are ‘Russian propaganda’! Go figure.

Alas, the last 15 years have not been kind to the British press. The willingness to countenance alternative viewpoints has been replaced by a rigid orthodoxy which allows no deviance from the endless diatribe of, as I said, ‘fact-free fearmongering’. In those circumstance, is it actually a bad thing that those viewpoints now have somewhere else they can find expression?