Why when Covid and Covid-attributed deaths are as present as ever?

If you point your browser at World Socialist Web Site you will gaze upon a site that has been consistently and tirelessly calling for Draconian Covid lockdowns for nearly two years now. Right now their top headline reads “The global pandemic and World War I: The ruling class decides for death“. They run something like it every few days.

They started calling for urgent, more and harsher lockdowns in 2020 — and since the Covid situation hasn’t changed dramatically since — they never stopped. 2021 saw as many Covid-attributed deaths as 2020 so everything that applied to 2020 must also apply to 2021.

The basic premise of the World Socialist Web Site is that we could be saving more lives with longer and deeper lockdowns but that the ruling capitalist class is “prioritizing profits over lives”. I think they are wrong, but I respect their consistency. Their logical consistency in remaining as zealous as they were on the first day — since data remains unchanged — forces me to appreciate that they are sincere. They are doing what they believe in and they will keep doing it — with the same intensity — for as long as they believe in it. Should they ever stop they will have an explicit reason and explanation for it.

Let’s compare that to their fellow leftist, Moon of Alabama (Bernhard). In March-April-May 2020 you couldn’t find a more active, more zealous, or more radical proponent of lockdowns in the entire alt-media. He famously argued that Western European governments should grab Covid-positive children from their parents and house them in quarantine centers. (He called it “breaking the family chain.”) Equally famously the proponent of the “Lockdown Is Not Enough” approach argued that even with the post-March-23 lockdown the UK would only have enough intensive-care beds for just a fraction of those who needed them:

“You may live” and “you must die” decisions will have to be made as there is not enough capacity in place.

In the event, British hospitals languished at overall occupancies as low as 60% and overall intensive-care units occupancy didn’t even hit 80% — substantially less than in normal times. None of this shook Moon of Communism or his beliefs. He certainly offered no explanation as to why Belarus never saw its ICUs swamped by ten times as many people as they could handle.

So then what is MoC up to these days? Certainly just like the World Socialist Web Site he has never stopped tirelessly advocating for more, deeper, and urgent lockdowns, right?

Since COVID and COVID deaths remain just as present as they were in those early days what else could he be doing?

Since he was such a radical in the early days and never repudiated that radicalism, he really doesn’t have a choice, does he?

If lockdown zealotry was so urgently needed in early 2020, then it is no less needed in late 2021 as the northern hemisphere starts to enter another virus season. (With mRNA treatments that do not affect transmission and only partly protect against virus-associated death.)

So with how many COVID-related articles has this old anti-Covid fighter blessed the world with in 2021?

Just two Covid-related article from this anti-Covid crusader in entire 2021 in which a few million people are said to have been killed by this virus.

Even those two weren’t as Maoist as his earlier work. In distant February Mao of Alabama warned that a terrible “third wave” that would go against seasonality and would hit “ten times the infection numbers of the second wave” was already starting, but also acknowledged that many people were done and over with the forever virus war.

There is a growing share of the population that ignores lockdown and mask mandates. These are not all Covidiots. The people have just had enough of it.

He predicted that the average age of death in this “third wave” would drop drastically:

“There will no longer be grandpas or grandmas of age dying from Covid-19 but mothers or fathers in the best years of their lives. The sum of years of life lost (YLL) during the third wave will therefore likely exceed the sum of the second wave.”

He claimed that his hope was that he was wrong, but then never revisited his dire predictions to examine if they had been right or wrong. (Was there a massive wave from February to Summer? Did the average age of death see a dramatic drop? You tell me.) 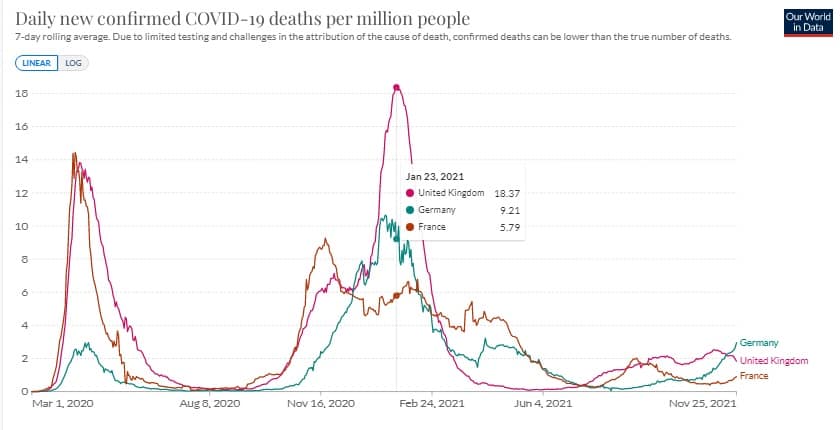 Then this September Mao of Alabama told his readers they should get vaccinated but didn’t need a booster. (He believes mRNA gives robust T-cell immunity.) He felt forced to do so after “a number of misleading comments about Covid-19” from his readers:

There were again a number of misleading comments about Covid-19 in yesterday’s open thread. I have deleted a dozen or so of those.

Defying health authorities and The Science to tell readers to skip the booster, and acknowledging that his lockdown fanaticism is increasingly unpopular with the masses — these are no small feats for this Virus Maoist. In April 2020 his message was rather less ambiguous:

Shut everything down that can be shut down. Increase social distance as much as possible. Avoid all live social contacts wherever possible. Do it NOW!

Not shutting everything down guarantees that our health care systems will get overwhelmed.

But the major difference isn’t the slight change in tone, but that alt-media’s onetime foremost Virus Mao essentially no longer ever covers COVID or advocates for anti-COVID measures.

This is what the World Socialist Web Site has done. Since the virus situation in 2021 wasn’t substantially different from the one in 2020 they never stopped fighting the good fight. Why has Moon of Mao?

Why precisely was the same threat worth so much ink in the Spring of 2020, but has been barely worth a mention in the entire 2021?

The one thing he can not claim is that he is no longer in the fight because he is no longer needed. The lockdown ideology was never more ascendant than in March-April 2020 and it is precisely then that he was piling on. Back when billions of human beings were in forced lockdown and there was barely any opposition to it he was expending ink on Covid by the barrel. Yet as “anti-virus” measures have gradually become less and less appetizing, when they are in greater need of talented advocates and defenders than ever, Mao is nowhere to be found.

PS.: On this site, you can post all the “misleading comments about Covid-19” you want. I don’t delete stuff just because it rubs me the wrong way. (And I’m certainly not going to delete your stuff then write a full-post reply to have the last word.)

The only comment rules are: Don’t impersonate another commenter.

And: Try not to name-call each other too much. Namecalling is for those who cower and refuse to engage, but if someone is in the comment section that speaks to at least some willingness to debate. Try to insult their comment more than the person. Instead of calling the person stupid say “This is the stupidest crap I ever read.” It feels just as good, gets essentially the same thing across, but still exudes some courtesy for the fellow flame war duelist.