China will continue to improve and expand its dregger fleet and triple dredging capacity again over the next 15 years. China will spend $2 to 4 billion per year on better ships and on operations to build islands. China has built a 140-meter-long, 28-meter-wide dregger, the Tian Kun Hao, which has described by some local media as “Asia’s most powerful island maker”. It is expected to go into service in the summer of 2018. [Text is from April 2018.]

The Paracel Islands are a chain of some 130 tiny features. China will likely be building up dozens into islands with airports, missile facilities and ports.

The 87 miles of fortifications that made up the Maginot line were completed by the 1935 cost of 7 billion francs ($8 billion in 2015 terms). This was about 60-90% of one year of France’s military budget in the final year of its completion.

The Maginot Line only had anti-tank guns and fortifications against soldiers and tanks.

China is spending about $5 billion to create and fortify each large man-made island in the South China Sea. This is for five-square-kilometer military bases. The bases often have 1-2 mile long airport runways and ports. These are larger than aircraft carrier runways. This means planes can launch with full loads of fuel and weapons. This allows planes to operate with longer ranges.

The four largest military installations in the SCS have extensive facilities for the operation of military aircraft. This includes advanced fighters, but more importantly patrol, electronic-warfare and advanced early-warning aircraft. The ability to use these airfields effectively extends the reach of China’s A2/AD bubble, enabling the transmission of targeting data to missile launchers at sea and in mainland China. The fighter aircraft themselves serve to make the skies over the SCS even more lethal than they otherwise would be, as well as threaten U.S. ships at a distance with cruise missiles.

China can operate the J-20 stealth fighter which has a combat radius of about 1250 miles and firing cruise missiles with 180-600 mile range. 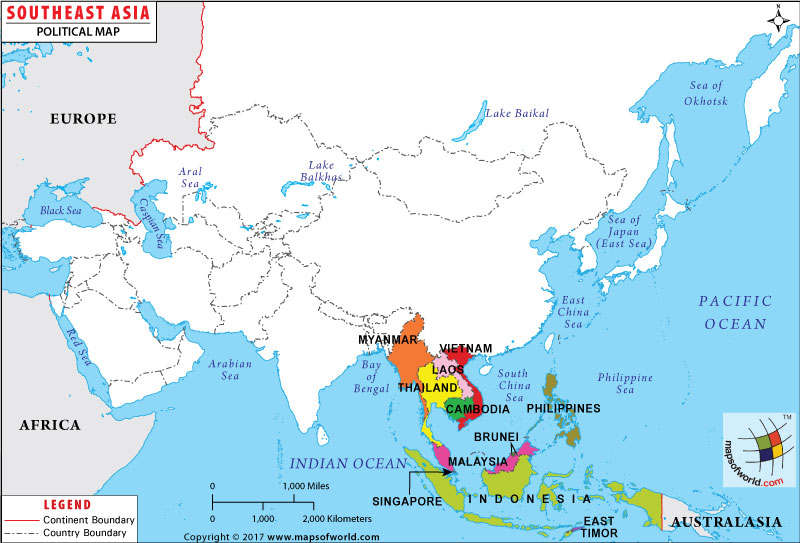 If China completes fifty islands and has military bases for each then this would cost about $250 billion and would be completed in about ten years. China’s military budget is growing at about 7% per year and would likely be about $650 billion in 2027. 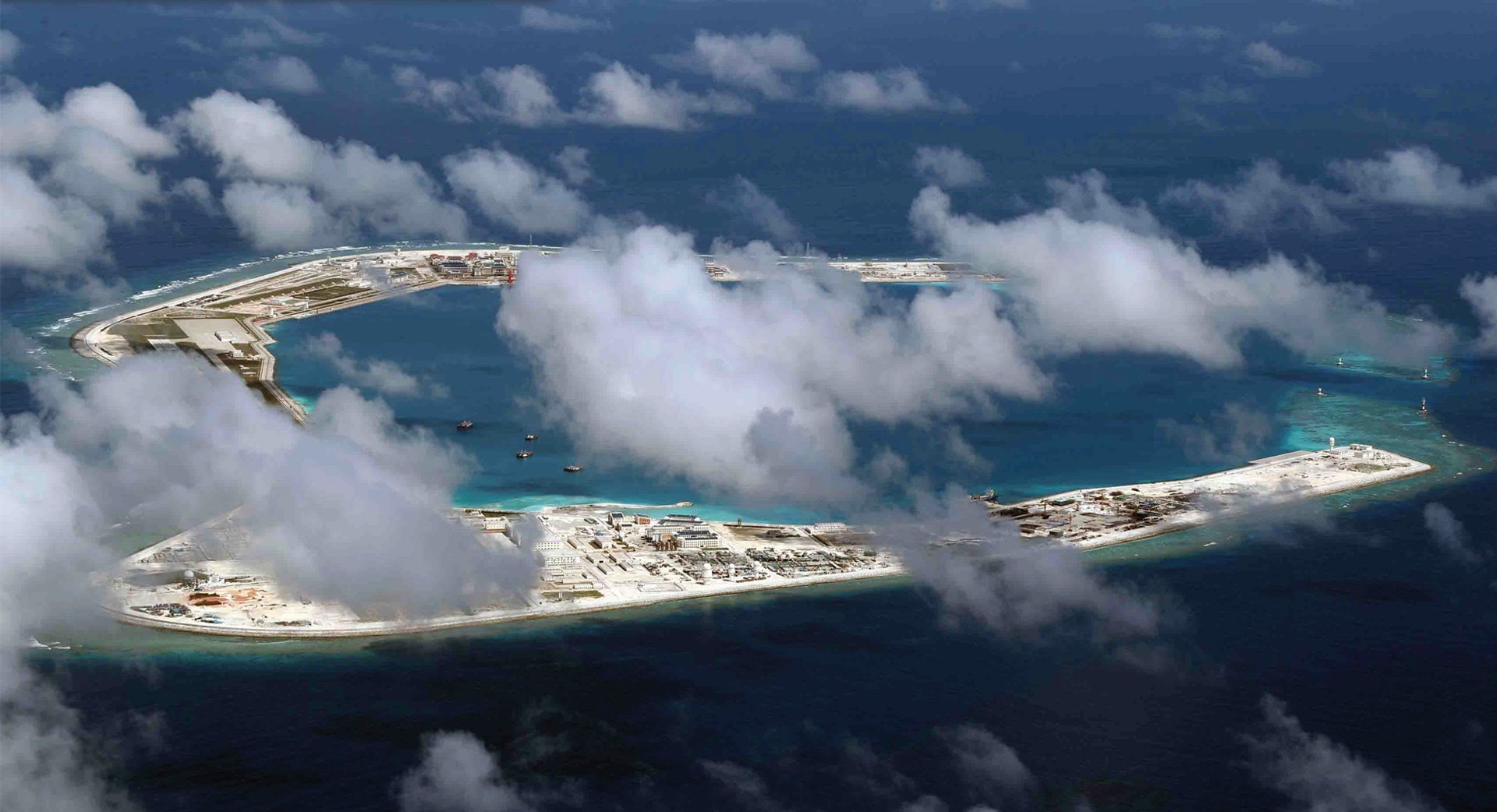 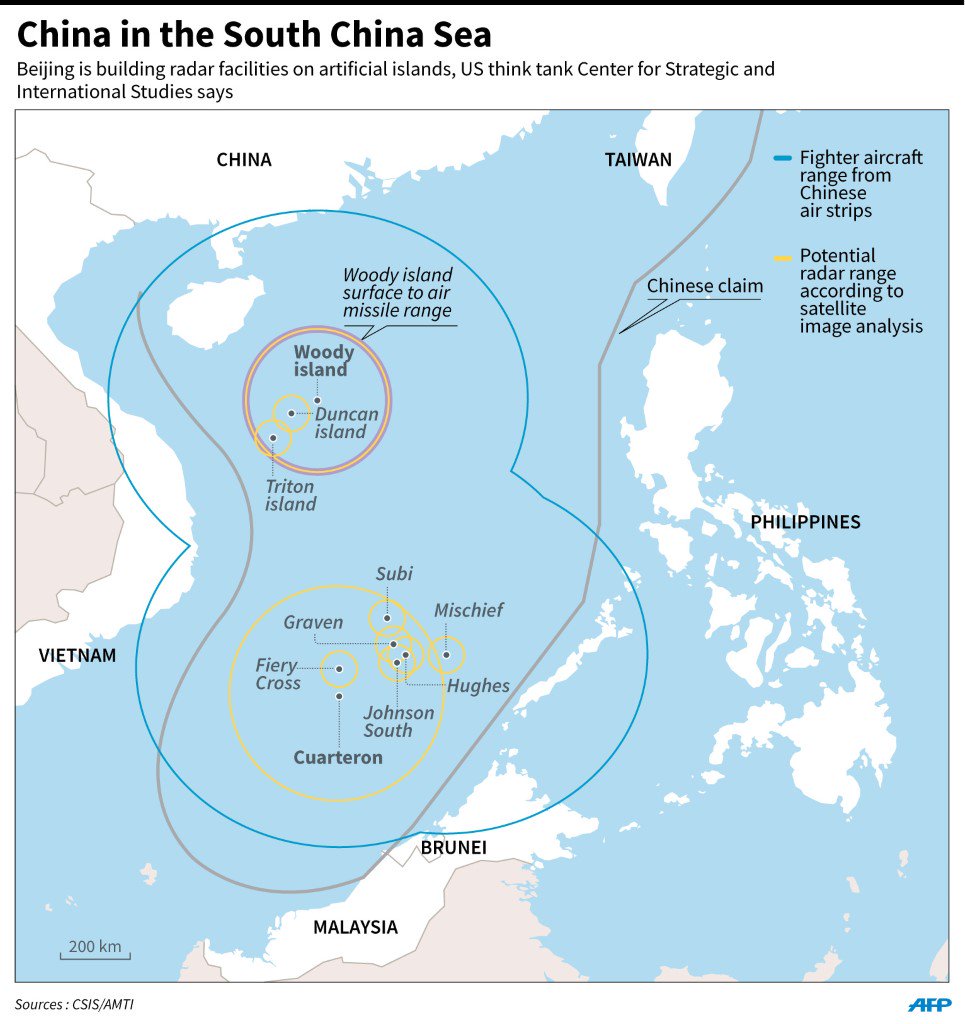 Case against the value of the island bases

The National Interest does not think the South China Sea bases will be sustainable in an actual war.

The National interest agrees that the larger bases (Subi, Mischief, Fiery Cross and Woody Island) have infrastructure necessary for the management of military aircraft, including fighters and large patrol craft. These missiles, radars and aircraft extend the lethal reach of China’s military across the breadth of the South China Sea.

Several of the islands serve as bases for SAM systems (including the HQ-9, with a range of 125 miles, and perhaps eventually the Russian S-400) and ground-launched cruise missiles (GLCMs). These missiles serve to make the South China Sea lethal for U.S. ships and aircraft that do not have stealth capabilities, or that do not enjoy a layered air-defense system. The SAM installations, buoyed by networks of radars, can effectively limit the ability of enemy aircraft to enter their lethal zone without significant electronic-warfare assistance.

Man-made defensive installations may not survive concerted attack. Missile launchers depend upon an at least somewhat robust logistical network for fuel, power and munitions, which China may not be able to reliably provide during a shooting war.

The larger islands have aircraft shelters, it is an open question whether these shelters could long survive a concerted U.S. attack.

The islands of the SCS have some military relevance, but are more important as a political claim to waterways and undersea resources.

The US would currently have to hit the islands with about 100-300 planes and maybe a dozen ships. The force would then also trigger China’s mainland defenses.

In ten years with about 30-50 bases, the US would need to hit the islands with about 1000-2000 planes or find new technology and strategy to go around. Massive space-based systems could be deployed via the SpaceX BFR by around 2030.

China wants the South China Sea more than the US does

China wants the South China Sea more than the US does. The US would not commit the force needed to defeat those bases.

China also gains economic resources and geopolitical control and advantages from the islands.

The islands will support fishing, tourism and other commerce. The islands help support China’s claims to deep sea oil, gas and other resources with trillions.

The Maginot line did not extend France’s control to new areas or provide economic or territorial gains.

The economic and political gains that China is getting from the islands are making up for the costs of building them.