"Far from abandoning its arsenal, Pyongyang is now more confident than ever in its need for a nuclear deterrent" 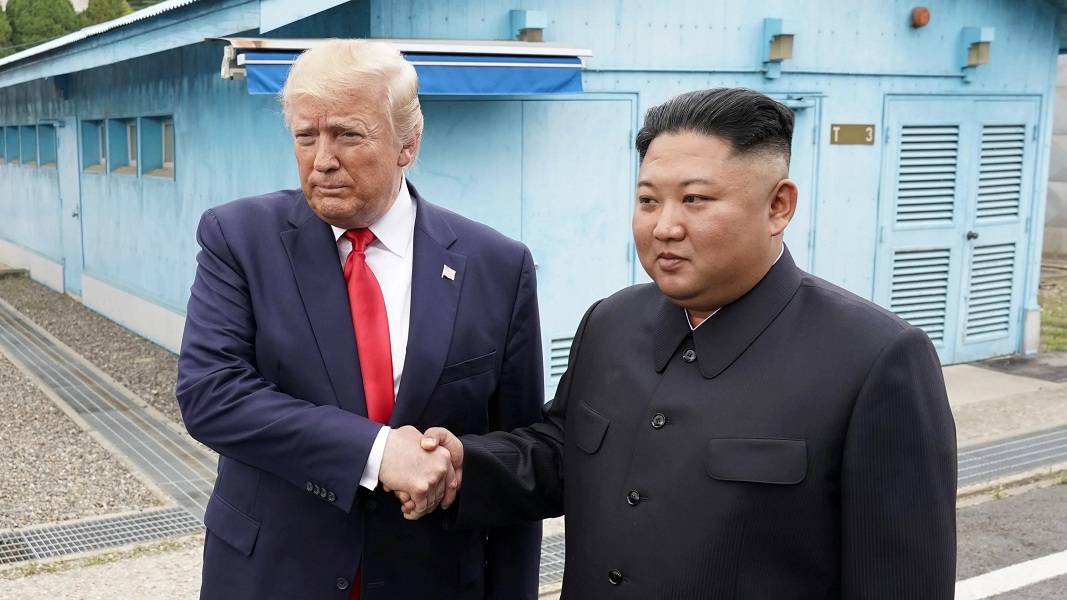 Through a combination of myopic diplomacy and disastrous personnel picks, President Donald Trump has wasted a chance to fundamentally remake US relations with North Korea, throwing away a “Nixon goes to China” moment in exchange for a confused “maximum pressure” campaign that’s delivered the same failures of previous administrations. Having missed Pyongyang’s year-end deadline to revive stalled talks, the defects of Trump’s North Korea strategy are on full display.

On the campaign trail in 2016, then-candidate Trump took unusually dovish stances on North Korea for a Republican nominee. From openly considering whether to withdraw some of the 30,000 American troops stationed in South Korea, to even inviting North Korean leader Kim Jong-un for an unprecedented visit to the US, Trump at the very least appeared willing to talk – “an overture that would upend three decades of American diplomacy,” the Times told us.

Even after Trump took office, there were early plans for informal talks with North Korean officials, but the trend would soon die. The meetings were abruptly called off, and the president’s first Defense Secretary, James Mattis, was dispatched to Seoul to assure that no troop withdrawal would take place. Trump’s flirtation with detente was only momentary, but it panicked Washington zealots committed to endless hostility with North Korea, some of whom ended up with jobs in the new administration.

So began months of “fire and fury,” which saw the two sides trading threats, the Pentagon carrying out its regular joint war games with South Korea – rehearsing an invasion of the North – and Pyongyang responding with a variety of weapons tests. Casting aside the friendlier tack put forward on the campaign trail, Trump embarked on a “maximum pressure” campaign, leveraging sanctions and tough rhetoric to push North Korea to bow to the American diktat, disarm and effectively surrender.

While the corporate press was focused on the war of words between Trump and Kim, however, a true believer in Korean peace was elected president in South Korea: Moon Jae-in. The new leader would serve as a counterweight to the hawks in Trump’s ear, making for a convulsive US policy which shifted erratically between open hostility and willingness to talk.

Despite the rising tension at the time, President Moon led a successful effort to see the two Koreas compete under the same flag in the 2018 Winter Olympics, a significant step away from Trump’s tweets of “war and annihilation,” and one which was at least tacitly accepted by Washington.

The symbolic victory of the Olympic games created momentum for Trump’s first summit with Pyongyang – the first ever meeting between an American and North Korean leader – held in Singapore in June 2018.

The meeting was in many ways a success, resulting in a joint statement vowing to continue dialogue on a number of issues, though the North Koreans made it clear from the outset that they would only discuss denuclearization in exchange for trust-building measures from Washington, namely sanctions relief and a security guarantee.

While the summit didn’t result in full rapprochement, it wasn’t all for naught. The North Koreans returned the remains of American soldiers killed during the Korean War and dismantled a missile engine facility, important small steps toward a truce. Around the same time, a ‘freeze for freeze’ status was adopted, in which Washington would halt its military exercises with South Korea in exchange for a freeze on nuclear and missile tests in the North. Moon, meanwhile, was allowed a freer hand to improve inter-Korean relations.

A countervailing force would soon challenge Moon’s drive for peace. Hired on as National Security Adviser (NSA) a few months prior to the Singapore Summit, infamous mad bomber and Iraq war devotee John Bolton was instrumental in keeping Trump from making good on his campaign rhetoric, doing his best to ensure US North Korea policy remained sufficiently bloodthirsty.

Bolton is despised in North Korea. He played a role in destroying the Agreed Framework – a Clinton era nuclear agreement later wrecked by the Bush administration – and has openly called for a “preemptive” attack on the Hermit Kingdom. Not long before landing the job as NSA, he penned an op-ed in the Wall Street Journal making the “legal case” for a first strike.

Weeks ahead of the Singapore summit, Bolton would also invoke Libya as the model for North Korean disarmament. Pyongyang could only take that as a moral threat, all too aware of the grisly fate of Libyan strongman Muammar Gaddafi, who gave up his rudimentary nuclear weapons program and was later murdered in US-led regime change plot.

By the time Singapore rolled around, however, Trump decided he could deal with Kim after all and the hawkish NSA was sidelined at the meeting, where he was seen sulking and sour-faced as diplomacy between Trump and Kim hit its peak – but it wouldn’t be Bolton’s final act.

In the leadup to the next US-North Korean summit set for Hanoi in February 2019, a divide in the Trump administration deepened as hawks – led by Bolton – continued to push for the “Libya model.” Ignoring the North’s long-held position that its weapons are solely meant to deter an American invasion, Bolton pushed for rapid denuclearization as a condition for any further dialogue (the standard American poison pill), insisting Kim dismantle the country’s entire program in the space of a year. The demand set “absurd expectations” and amounted to a “deliberate attempt to sabotage all talks with North Korea,” observed Daniel Larison of the American Conservative magazine.

Despite the hawks’ push, there was a glimmer of hope that Hanoi could build on the progress of Singapore. US envoy Stephen Biegun had been put in charge of the talks at this stage, who advocated a step-by-step trust-building process that would see the US cautiously trade sanctions relief for a slow dismantling of North Korea’s nuclear arsenal.

The hope was short-lived. In what may have been the highlight of Bolton’s tenure on Trump’s national security team, he would steal the show in Hanoi, persuading the president to scrap Biegun’s more reasonable proposal in exchange for an offer Kim couldn’t possibly accept, once again demanding disarmament before Washington would make a single concession.

As expected, Kim rejected the “deal” outright, the summit abruptly ended and the nascent peace process cooled. The economic war against North Korea – which never ceased throughout the negotiations – marched on, prompting a few small retaliatory missile tests unrelated to Pyongyang’s nuclear program. While Trump downplayed the importance of the tests, it was a clear sign the ‘bad cop’ approach was doomed to fail.

With crippling sanctions continuing to grind down the North Korean economy and populace, and the post-Hanoi peace process stagnated, Kim issued an end-of-year deadline last April to revive the talks. The ultimatum called on the US to come to the table before the end of the year, or else Pyongyang would scrap all progress made since the 2018 Olympic Games, including any freeze for freeze commitments it agreed to during that time.

Seeing the bleak prospects for talks, President Moon soon traveled to Washington to plead with his American counterpart and was once again able to grease the wheels of stalled diplomacy. Less than two months after the visit, Trump would send an unprecedented tweet inviting Kim to a historic meeting at the Demilitarized Zone (DMZ), the physical embodiment of the intractable Korean conflict.

After some very important meetings, including my meeting with President Xi of China, I will be leaving Japan for South Korea (with President Moon). While there, if Chairman Kim of North Korea sees this, I would meet him at the Border/DMZ just to shake his hand and say Hello(?)!

Moon’s hard-fought efforts appeared to finally pay off in the summer of 2019, when all three leaders – Trump, Moon and Kim – met for the first time.

The meeting produced mostly symbolic progress – including Trump becoming the first US president to cross the DMZ into North Korea proper –  but it did end with an agreement to form teams for continued talks. Importantly, the American team would again be led by Beigun, not Bolton or Mike Pompeo, the bellicose secretary of state.

Biegun again looked to take a more flexible approach to negotiations, this time proposing a nuclear freeze deal in exchange for sanctions relief. Better yet, the renewed drive for dialogue occurred as Bolton’s influence seemed to be waning in the White House – he was exiled to Mongolia for a meeting during the DMZ-crossing – with expectations that he would soon get the pink slip.

While the DMZ meeting and Biegun’s new proposal appeared to put things back on track, a major obstacle was fast approaching: joint US-South Korean wargames set for August 2019, which the North had long complained were threatening and unnecessarily provocative. Though the US insisted the drills had been scaled down and were purely defensive, Pyongyang denounced them as a breach of the freeze for freeze status established in 2018, reacting with a series of short-range missile tests.

Rumors about a new round of talks swirled throughout the fall of 2019, but the North Koreans had grown increasingly doubtful of the Americans’ good faith, insisting there would only be another meeting if Washington fundamentally changed its attitude. As November rolled by with no new offer, Kim began referring to a “gift” he might send to the US for Christmas, a vague but ominous threat picked up and amplified in the establishment press.

Much of the progress made in Singapore and at the DMZ had effectively been reversed, leaving the US and North Korea close to where they began when Trump took office, returning to a familiar pattern of threats, military drills and missile tests.

It was clear by December that the US and North Korea would not resume serious talks by Kim’s deadline. With Trump – and Washington – fully absorbed in endless impeachment drama, there was simply no time, leaving many to nervously speculate about what kind of “Christmas gift” Kim might have in store.

Jolly St. Kim didn’t even bother to deliver a lump of coal for his Christmas surprise, however, and the day came and went quietly, despite widespread press predictions of a major nuclear weapons test. In the week between Christmas and the New Year, Kim spent four days meeting with his inner circle, thinking long and hard about how to respond to Trump’s failure to meet his deadline.

With none of the theatrics anticipated in the US media, Kim soberly unveiled his “new way” for the new year, resigning himself to an immovable status quo in Washington:

“The present situation warning of long confrontation with the US urgently requires us to make it a fait accompli that we have to live under the sanctions by the hostile forces in the future,” Kim said, according to the KCNA.

Though still holding out for the possibility for a return to the freeze for freeze status, North Korea would no longer actively pursue peace talks. Kim had finally given up.

While the United States and North Korea have not yet returned to the height of enmity reached during Trump’s first year in office, it’s clear the strategy of “maximum pressure” has accomplished less than nothing, utterly failing to bring Kim to the table for a comprehensive peace deal, nor even a smaller preliminary one.

Far from abandoning its arsenal, Pyongyang is now more confident than ever in its need for a nuclear deterrent – talking appears to get them nowhere. President Moon may now be the best hope for peace on the Korean Peninsula, but with forces in Washington arrayed against him, even he may not be up to the task.