Masks Are Nothing but Dress Code Loyalty Oaths to Governments

"It's government rule-making for the sake of rule-making whose chief purpose is to demonstrate that it is the government's job to command and each citizen's duty to readily obey."

The Centers for Disease Control released another study showing no statistically significant decrease in “daily case” or “death growth” rates from COVID-19 in areas with mask mandates.  This comes after a similar CDC study in October indicated that mask mandates do not appear to have slowed or stopped the spread of the coronavirus at all.  Still, the CDC continues to recommend that all Americans wear masks, except in certain private settings when individuals are fully vaccinated, unless the goalpost-shifting Dr. Fauci gets his way.

This whole “masks don’t seem to be having much effect, but wear them anyway” bureaucratic calculus may seem like a frivolous controversy to Americans preoccupied with the pandemic, but for Americans who are equally worried about the State’s steady encroachment into the lives of families, mask mandates are the worst kind of noxious administrative abuse — another iteration of government coercion that constricts a person’s freedom while accomplishing next to nothing.  It’s government rule-making for the sake of rule-making whose chief purpose is to demonstrate that it is the government’s job to command and each citizen’s duty to readily obey.

Mask mandates are the perfect metaphor for a government that demands obedience:

Mask mandates are reminiscent of Barack Obama’s belief that wealthy Americans should be taxed at higher rates, even if the imposition of those new taxes produces no net benefit for the federal treasury.  By his own admission, Obama’s insistence on increasing taxes for wealthy Americans was not about generating government revenue or reducing government debt, but rather about punishing individual Americans for having acquired too much personal wealth.  It was a way for Obama to prove that he takes income inequality seriously while doing nothing about it.

In the same way, our American mask mandates are not really about reducing the spread of disease or “following the science,” but rather about insisting that individual Americans prove through their attire that they take COVID-19 seriously, even if masks do nothing about it.

And it has unfortunately become the standard operating procedure for the American government.

In poll after poll, Americans have made it clear that they strongly oppose mass illegal immigration.  Ignoring their wishes, the Biden administration has set into place policies that have created a border crisis with no end in sight.

In poll after poll, Americans have made it clear that jobs and the economy are more important than recklessly combatting a global temperature change of a few hundredths of a degree over the next century in the name of “climate justice.”  Ignoring their assessment, the Biden administration has killed off oil and gas jobs, increased the cost of gasoline at the pump, and handcuffed America’s energy independence in the name of green dreams — strengthening the economies of Russia, China, and Iran while impoverishing millions of Americans.

In poll after poll, Americans have made it clear that they prefer increasing manufacturing and economic diversification at home to depending upon the supply chains and resources of an adversarial China.  Instead, the Biden administration has actively discarded the “America First” economic policies of President Trump and reoriented America back toward the globalist initiatives of the last half-century that benefit transnational banks and Wall Street traders while crippling Main Street businesses and making America vulnerable to her enemies.

For Americans who believe that the government spends most of its time doing the exact opposite of what America overwhelmingly prefers, a mask mandate that accomplishes so little in the way of public health seems like the perfect metaphor for the government’s desire to shut up its own citizenry.  What Big Tech censorship fails to catch in its net, Big Government catches in its own.

“What were you saying about ending endless wars, America?  We couldn’t hear you underneath two masks.  Now let’s invade Syria and build democracies everywhere but here at home.”

Mask mandates are also an illustration of the sharp philosophical divide straining Americans into two camps guided by conflicting worldviews.  In the one are true democrats who believe that all legitimate government power is derived from individual consent, and in the other are true socialists who sanctify the exercise of government power in pursuit of collectivist goals at the expense of individual liberty.

Alexis de Tocqueville contrasted these worldviews aptly: “Democracy extends the sphere of individual freedom; socialism restricts it.  Democracy attaches all possible value to each man; socialism makes each man a mere agent, a mere number.  Democracy and socialism have nothing in common but one word: equality.  But notice the difference: while democracy seeks equality in liberty, socialism seeks equality in restraint and servitude.”

When viewed alongside de Tocqueville’s perceptive taxonomy, it is not hard to understand why mask mandates proving to have scant efficacy strike so many Americans as nothing more than the government’s attempt to seek “equality in restraint and servitude.”  Whether a scientific study actually supports the hypothesis that coronavirus transmission can be retarded through the use of masks has become irrelevant.  All that is important is that government functionaries deem the practice to be in the public’s best interest.  An individual is forced to abandon personal reason and judgment for those of the government, a proposition that strikes a true democrat as inherently delegitimizing of any democratic system.

For Americans who believe that society should operate freely from government as much as possible and that government action should be reserved to handle only those problems that a cooperative society cannot accomplish on its own, relatively useless government dictates are absolute poison.  They reinforce President Reagan’s biting observation that the “nine most terrifying words in the English language are: I’m from the government, and I’m here to help.”  Americans with a healthy suspicion of government authority have no trouble understanding this joke.  They do not care about the government’s “good intentions”; they detest the government’s insistence on so casually and unnecessarily interjecting itself into the lives of private citizens.

In a sense, mask mandates have become nothing more than dress code loyalty oaths to the same state and local governments that have claimed for themselves the extraconstitutional powers to restrict free speech, religious liberty, personal commerce, and voluntary movement beyond the home in the name of a virus.  They represent Americans’ symbolic acquiescence to government’s mass lockdowns and economic shutdowns and their tacit acceptance that government’s unconstitutional power grabs are somehow legitimate.

This symbolism, not the statistically insignificant decrease in infection and death rates in areas with strict mask mandates, is what actually animates those Americans who insist on controlling what covers other Americans’ faces.  An American who refuses to participate in virus virtue-signaling is an American who refuses to believe that the economic, educational, and social carnage of the last year was justified.

And that repudiation is just too much for proponents of bigger and more intrusive government to take in stride.

As shown in this article, there is a significant long-term negative impact to masking that has received no media coverage:

Research clearly shows that masking will have a negative impact on brain development.

A dumbed down society is usually more obedient … of course they want the next generation to be independent thought handicapped. All crap. 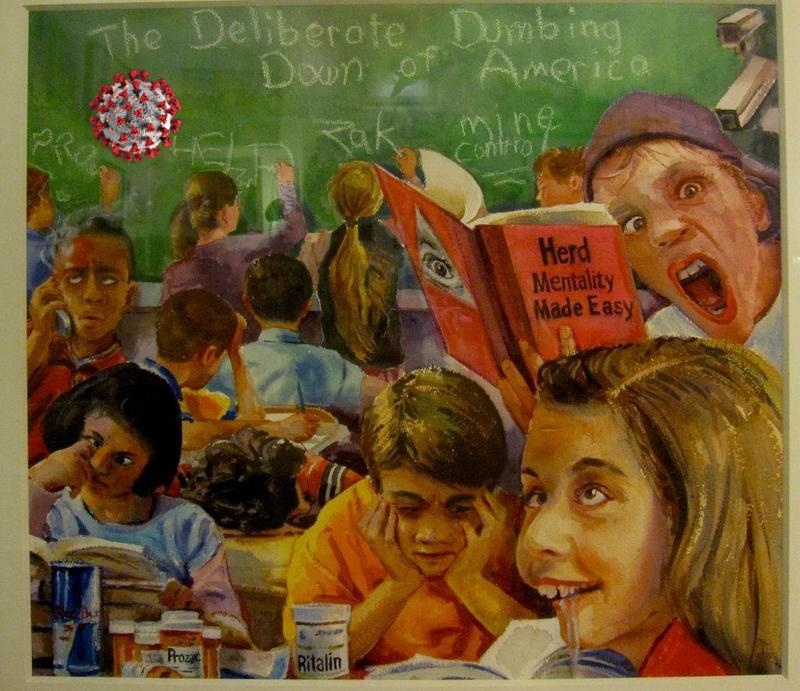 The dumber the better!

There will be serious consequences, especially for children if this asinine masking continues. I hope that those forcing this are sued.

These masks are depriving the child’s brain of necessary oxygen and increasing CO2 which both combined are extremely dangerous to development. .

The government itself states ‘the children’ very, very, very rarely catch their alleged plague. So what’s the point?

The adults wearing these filthy things and forcing their children to do the same will not experience brain issues from wearing the face nappy as they obviously have very little brains left.

The only other use I can ascertain from adults wearing these things would be to indicate to the Gates depopulation team which lemmings should be the first to go.

i wear a mask to get in and get my food
then it is off..
as far as me obeying
I DONT PAY TAX
I DONT REGISTER MY CAR
I DONT BUY INSURANCE ( OF ANY KIND )
I DONT OBEY
AND I WILL ALAMO
FIND OUT

You still do pay property tax and sales tax?

the government can go straight to hell for alls I care, and hell is where they are all going. Remember people, God instituted the form of Government and there roles, he stated that government was put there for the protection of the people against wicked men, but when the Government becomes a terror to good works then we are commanded by God to disobey and not listen to them any longer,we have the ordained duty to rebel .