Marseille, Madrid and Middlesbrough Are in Revolt Against the COVID Cult Occupation

More people are standing up for their communities and liberties 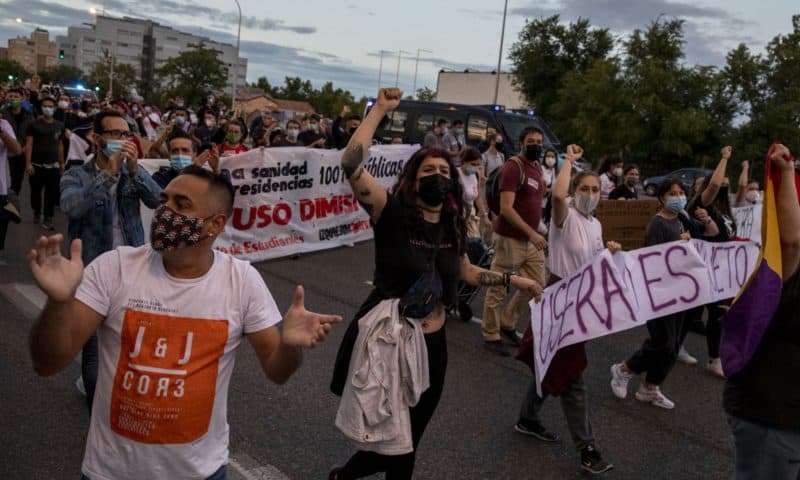 Marseille, Madrid and Middlesbrough, three places that aren’t often uttered in the same breath, have become the centres of a nascent revolt against lockdown.

Marseille mayor Michèle Rubirola said she was ‘astonished and angry’ after all bars and restaurants were ordered to close last week in France’s second city, following a nationwide rise in cases. (Milder restrictions were imposed in Paris and elsewhere.) ‘Marseille town hall was not consulted. Nothing in the health situation justifies these announcements’, she tweeted. ‘I won’t allow the people of Marseille to become the victims of political decisions that no one understands.’

Meanwhile, protests have raged again in Madrid, following the imposition of localised measures on particular districts that protesters say are punishing the poor. Comments made by Isabel Díaz Ayuso, the president of the Madrid region, suggesting ‘the way of life of immigrants’ was partly to blame for the rises in cases, have also sparked a fierce backlash.

A manifesto signed by various neighbourhood groups denounces the new measures as racist and classist, arguing that they single out the ‘individual behaviours’ of poorer residents for scorn when in all neighbourhoods rules are being broken. It demands that the government focus on healthcare, contact tracing and overcrowding in schools and public transport.

The agitation with government diktat is even starting to flare up in supposedly compliant Britain. From Saturday it will be illegal for nearly five million people in the north-east and north-west of England to meet people from other households indoors, including in pubs, bars and restaurants. Similar rules have already come into force in other parts of the north-east.

The mayor of Middlesbrough, however, is having none of it. Andy Preston said yesterday that the new restrictions are based on ‘factual inaccuracies and a monstrous and frightening lack of communication’. He isn’t against additional measures per se – he had suggested a ban on households mixing in their own homes – but argues that the Westminster-imposed rules are excessive and damaging to the economy. ‘As things stand, we defy the government and we do not accept these measures’, he said.

While what this means in practice remains unclear – he has since said people should abide by the law – the anger with harsh measures being imposed on already struggling communities is palpable. Not least because the local measures being imposed, in some cases with literally five minutes’ notice, seem increasingly irrational, knee-jerk and ineffective.

Around a quarter of English people are currently under enhanced Covid restrictions. But analysis published by the Guardian this week shows that Covid cases have doubled under most of the local lockdowns. As a Telegraph analysis revealed last week, only one place, Luton, has emerged out the other side of local lockdown. And case numbers are already heading in the wrong direction there, too.

None of these politicians or protesters are blasé about the threat posed by the virus. But even those who will have at first supported tough measures to tackle this pandemic are starting to bristle at neverending, illiberal, job-killing restrictions that stubbornly refuse to achieve what they set out to do, and whose failures are simply blamed on the alleged, cussed non-compliance of the people suffering under them.

On the national level, the UK government also seems to be making it up as it goes along. Professor Mark Woolhouse, a member of the Scientific Pandemic Influenza Group on Modelling (SPI-M), told the Telegraph this week that the ‘rule of six’ and the 10pm curfew had no basis in science. Indeed, according to Public Health England, pubs and restaurants were responsible for less than three per cent of investigated incidents in the week before the curfew was announced.

No wonder so many people are starting to question whether governments, drunk on draconian powers, have any idea what they’re doing. British public opinion appears still to be firmly behind tough restrictions, going by the polls. But as Joanna Williams notes in the Spectator, voters’ actions tell a very different story. Meanwhile, other polls suggest that while voters still prioritise health over the economy, the gap between the two has halved since April.

A revolt against lockdown is long overdue. Whatever one’s view on the justifications for the original lockdown, any sane person must recognise that we cannot remain under such punitive restrictions indefinitely. We need to keep Covid under control. But we also need jobs, time with our families, human contact and control over our own lives. Here’s hoping more people push back against this dreadful New Normal.