Philippines’ Marcos was a failure in both respects. Coming to power in 1965 and installing himself as dictator in 1972 he lived just a little big too long. In 1986, aged 69 he was deposed and exiled. Three years later he died in the US.

His family lobbied for him to be buried in the Philippines, in a cemetery of national significance and if possible with state honors. It was a clear attempt to rehabilitate Marcos’ legacy and help the political fortunes of his clan. 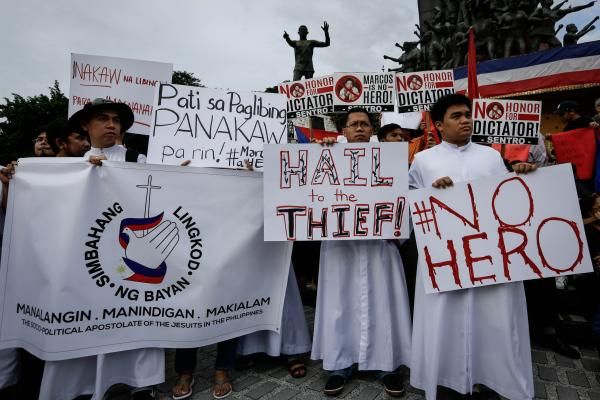 Request was denied so his famously kleptocratic wife bizarrely kept the body unburied in a refrigerated mausoleum first in the US and since 2001 in the Philippines.

Last Friday, Marcos corpse was finally put six feet under in the National Heroes’ cemetary in central Manilla. Marcos clan had got their way —  the corpse of the nation’s most famous torturer now rests alongside its artists, soldiers and freedom fighters.

Reality is, however, Marcos had to be smuggled into his final (?) resting place like a sack of radioactive waste:

Late Philippine dictator Ferdinand Marcos was buried at the Heroes’ Cemetery on Friday, November 18, at noon, in an unannounced ceremony that outraged dissenters, contending that the burial is an offense to the victims of the human rights atrocities during his rule.

The Marcos family reportedly called for a “simple and private” funeral rites, according to Chief Superintendent Oscar Albayalde.

Marcos, who formerly served in the military, received a 21-gun salute. However, the ceremony did not include a state funeral parade.

Media reporters present at the venue initially thought that the ceremony would only be a rehearsal, until Director General Ronald dela Rosa, chief of Philippine National Police, arrived.

Dela Rosa explained that the police just received word about the burial on Thursday night. He also confirmed that incumbent President Rodrigo Duterte does know about the final schedule of the burial and has ordered for a “peaceful” ceremony.

Marcos supporters were also informed about the ceremony, but kept it confidential as instructed.

Anti-Marcos groups are calling this unannounced funeral rites as “underhandedness.”

In any case 27 years after his overdue death Ferdinand Marcos is finally worm food.