Kim Meets Putin: Nice Optics in a Historic Meeting That Sadly Changes Nothing

This is out of Russia's hands. By now Putin can do very little. Meeting was 99 percent symbolic 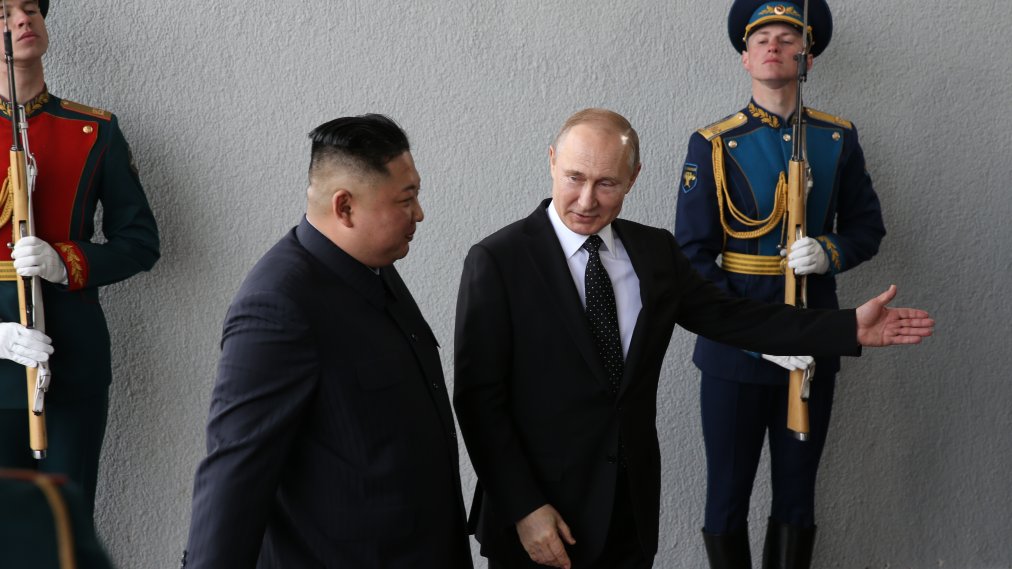 A writer over at the RT seems agitated that press in the US didn’t pay much heed to the Kim-Putin summit in Vladivostok yesterday:

While the mainstream media seems to see Russia as omnipotent in propping up ‘dictators’ and subverting foreign elections, Putin’s efforts at getting North Korea to quit its nukes are apparently in vain and not of much note.

While presumably efforts to thwart potential nuclear annihilation would be something of a news item, US news networks seemed to feel the meeting was more about posturing than peace. Coverage of the Putin-Kim summit gave off the distinct impression that Joe Biden’s long-expected presidential run announcement was of far greater consequence.

Over on CBS, foreign correspondent Charlie D’Agata claimed that Russian President Vladimir Putin had “wedged himself”in between Trump and Kim to prove himself as a player in the important international issue. He even described the Vladivostok peace negotiations as “Putin taking advantage of a global crisis situation.”

The talking heads at CBS also seemed to truly believe that Washington has some exclusive right to denuclearization talks, even as they admitted that US efforts in Hanoi had fallen flat. With Washington unable to come to an arrangement, it seems the rest of the world should just get ready to accept the fallout.

Surely at least CNN would be interested in two of their favorite bogeymen meeting to discuss their nefarious plots?…

The historic summit ended up taking a backseat to other stories mainly because, unlike what CNN says about Russian influence in every other country on earth, Moscow’s efforts at ‘intervention’ in North Korea are apparently totally futile.

But for once the US media was exactly on the money. Kim wants to gradually dismantle most of his nuclear capabilities in return for sanctions relief.

Trouble is there isn’t anything in the world Putin can do to help him with that. Whether Kim gets sanctions relief is entirely up to the US. Russia on its own can not even lift the sanctions Moscow and Beijing voted in two years ago in 2017.

I said at the time Moscow would regret voting in these sanctions — North Korea and the US were both at fault at the time for raising tensions (so Beijing and Moscow said) so sanctioning only one of the guilty parties, on the behest of the other guilty party, did not make any sense whatsoever.

It made even less sense given that US holds veto power at the UN. Now the sanctions may never be lifted without the US, and Russia and China are legally obliged to abide with them in perpetuity.

Moscow sometimes acts as the badly needed counterweight to the Empire, thwarting its worst designs and kudos to it for that. But when it comes to North Korea it has gone along with the US to a sufficient extent that it has by now handed most of the levers to Washington.

The US mainstream media is right. The first ever Kim Jong Un’s visit to Russia is historic as far as that goes, and meeting Putin makes for some nice optics, but at the end of the day the meeting was symbolic.

For a diametrically opposite take from mine you can check out Tom Luongo’s:

Kim went to Vladivostok to build a relationship with Putin and put the U.S. on the spot. Per Putin’s comments after the summit:

“We are going to discuss the situation with the US. Russia is always open on this – there are no conspiracies. More than that Kim Jong-un personally asked us to inform Washington of his position and the issues he wants to ask about.”

What Kim has done is elevated Russia and Putin to the level of mediator between North Korea and the U.S. Russia is now an equal partner in the process.

And the U.S. has been diminished in its position in these talks.

As I said yesterday, I expected something big to come from this meeting and this was it. Kim is no longer willing to talk with the U.S. directly and they must go through Putin and his staff of professional diplomats to do so.

I will be very happy if Tom turns out to be right, and I wrong, but for now I see nothing to change my mind from a year ago:

Moreover, even if Moscow and Beijing believed measures against North Korea are warranted it is unconscionable to introduce them in the form of UN sanctions. At the UN Security Council the US has veto power. Once passed such sanctions can never be lifted. The US which demands nothing short but total capitulation without a single concessions just as a precondition for “talks” will never allow it.

In this way Russia and China insanely place the future of the North Korean people in the hands of the cruel, pigheaded, and utterly remorseless American foreign policy makers. This is unconscionable. If North Koreans are as a result struck by a humanitarian disaster akin to that suffered by Iraq under UN sanctions in the 1990s, or indeed by North Korea itself from 1994 to 1998 Moscow and Beijing will be as culpable as Washington.