Not that they had a choice 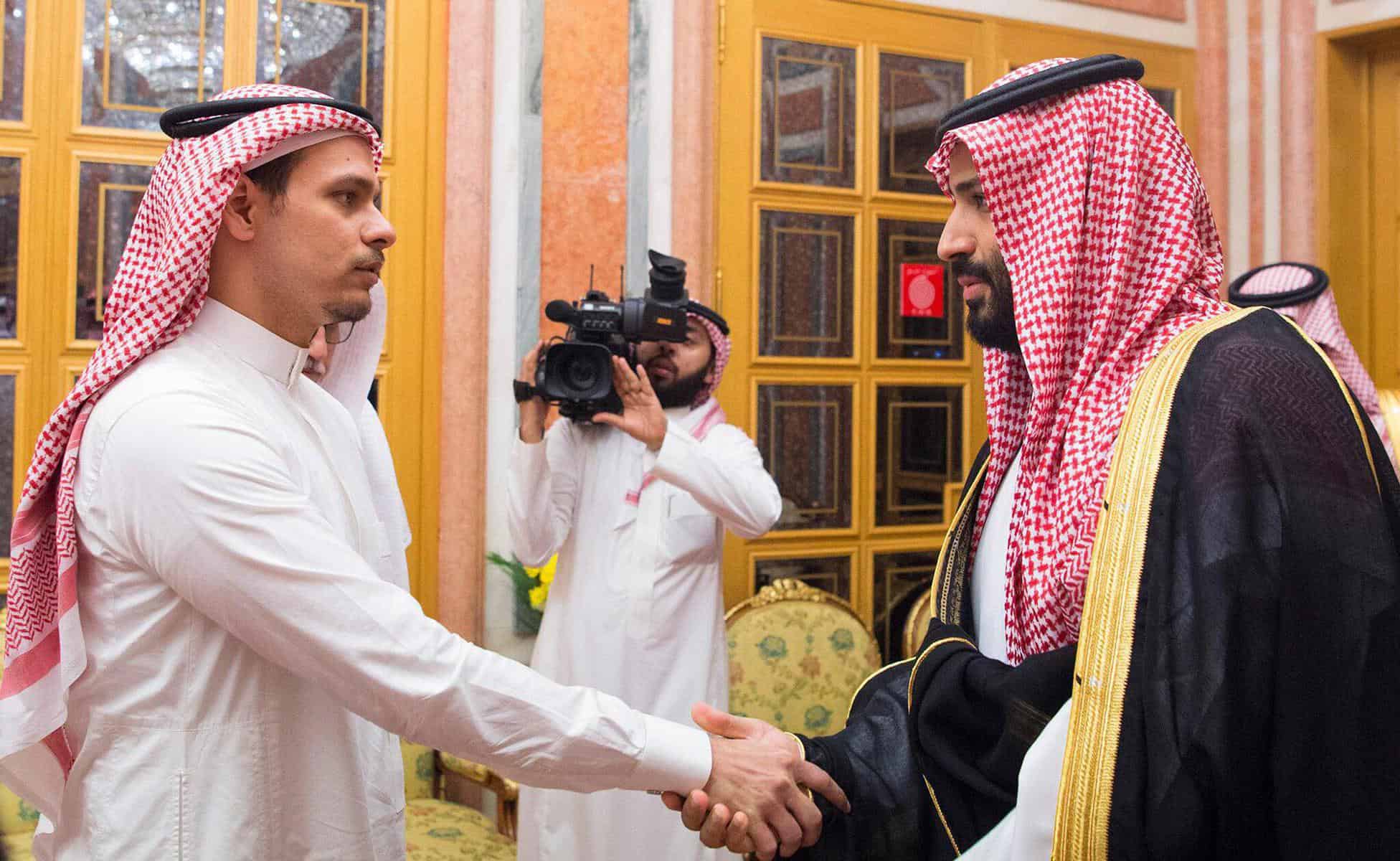 Salah Khashoggi, the late Saudi critic’s eldest son, posted the pardon in a tweet on Friday. “On this virtuous night of (Ramadan), we recall the words of God Almighty … whoever pardons and makes reconciliations, his reward is from Allah,” read the statement, referring to Laylit el Qader, or the Night of Power, considered by Islam to be the holiest night of the year.

“So we, the sons of the martyr Jamal Khashoggi, announce that we have pardoned (those) who killed our father,” the family added in the statement. Muslim governments typically issue pardons on the month of Ramadan.

According to Saudi law, a pardon from a son of a murder victim serves as a legal reprieve. Last December, five government agents convicted of Khashoggi’s murder at the kingdom’s Istanbul consulate in October 2018 were sentenced to death. Three other people allegedly involved in the case were given prison sentences.

Overall, 11 people were put on trial for Khashoggi’s murder, which sparked a global outcry and dealt a blow to the kingdom’s reputation.

The families of the convicts are now liable to pay blood money to Khashoggi’s family. If they can’t afford to make the payment, the state can pay instead, in addition to state money already given to the family.

A source last year told CNN that the family received millions of US dollars in cash and assets as compensation for the killing. Khashoggi’s sons denied that they received a blood money settlement from the Saudi government.

US intelligence concluded that the crown prince ordered the killing of Khashoggi. Saudi authorities have denied the allegations.

The children of slain Saudi journalist Jamal Khashoggi have received million-dollar houses in the kingdom and monthly five-figure payments as compensation for the killing of their father, according to current and former Saudi officials as well as people close to the family.

Khashoggi’s two sons and two daughters may also receive much larger payouts — possibly tens of millions of dollars apiece — as part of “blood money” negotiations that are expected to ensue when the trials of Khashoggi’s accused killers are completed in the coming months, according to the officials and others who spoke on the condition of anonymity to discuss sensitive talks.

The previously undisclosed payments are part of an effort by Saudi Arabia to reach a long-term arrangement with Khashoggi family members, aimed in part at ensuring that they continue to show restraint in their public statements about the killing of their father by Saudi operatives in Istanbul six months ago, the officials said.

The Khashoggi siblings have refrained from any harsh criticism of the kingdom, even as their father’s death provoked global outrage and widespread condemnation of the heir to the Saudi throne, Crown Prince Mohammed bin Salman.

The delivery of homes and monthly payments of $10,000 or more to each sibling were approved late last year by King Salman as part of what one former official described as an acknowledgment that “a big injustice has been done” and an attempt “to make a wrong right.”

But the royal family is also relying on its wealth to help contain the ongoing fallout from the killing and dismemberment of the prominent Saudi journalist and Washington Post contributing columnist who was targeted for articles that were often critical of the government.

A Saudi official described the payments as consistent with the country’s long-standing practice of providing financial support to victims of violent crime or even natural disasters and rejected the suggestion that the Khashoggi family would be obligated to remain silent. “Such support is part of our custom and culture,” the official said. “It is not attached to anything else.”

As part of their preliminary settlement, the Khashoggi children were each given houses in Jiddah worth as much as $4 million apiece. The properties are part of a shared compound in which Salah Khashoggi, the eldest son, occupies the main structure.

A banker in Jiddah, Salah is the only Khashoggi sibling who intends to continue living in Saudi Arabia, according to people close to the family. The others reside in the United States and are expected to sell their new Saudi properties.

Salah, who has been responsible for financial discussions with Saudi authorities, declined to comment on the matter when reached by phone Monday. His desire to remain in Jiddah with his family has contributed to the siblings’ deference to the authorities and caution in their public statements over the past six months.

In October, the Saudi government released photos of Salah shaking hands with Mohammed, an image that was meant to show the crown prince offering condolences but was widely seen as an indication of the coercive power the royal family was exerting on Jamal Khashoggi’s children.

The writer’s two daughters, Noha Khashoggi and Razan Jamal Khashoggi, published an essay in The Washington Post last year in which they described their father’s hopes for changes in Saudi Arabia but emphasized that he was “no dissident” and did not accuse the crown prince or other Saudi officials of being culpable in his death.

Noha did not respond to a request for comment, and Razan could not be reached.

The monthly schedule of payments and prospect of eventual multimillion-dollar settlements would appear to give the Khashoggis a long-term financial incentive to remain quiet even as human rights organizations and critics of Saudi Arabia continue to demand accountability from the kingdom.

Washington Post publisher Fred Ryan issued a statement Monday, six months after Jamal Khashoggi’s death, saying that the Saudis “have adopted a strategy of evasion” that has “scapegoated expendable officials, seeking to quell international furor by staging a sham trial.”

Khashoggi’s second son, Abdullah, declined to comment when reached Monday. William Taylor, a Washington lawyer who has represented the family, also refused to discuss any compensation the family has received.

The negotiations with the family have been led by the outgoing Saudi ambassador to the United States, Khalid bin Salman, brother of the crown prince.

The CIA concluded with “medium to high confidence” that Mohammed had ordered Khashoggi’s killing, but President Trump has refused to accept that verdict about a close ally, saying, “Maybe he did, maybe he didn’t.”

Saudi officials have strenuously denied that Mohammed was involved, describing the slaying as a rogue operation carried out by a team that intended to subdue Khashoggi and bring him back to Riyadh but killed him after a struggle at the consulate in Istanbul. Khashoggi came to the diplomatic facility to collect paperwork needed to remarry.

U.S. intelligence agencies, relying in part on eavesdropping equipment placed in the Saudi Consulate by the Turkish government, have concluded that Khashoggi was strangled or smothered.

Saudi officials have yet to explain what happened to Khashoggi’s body. His killers are believed to have dismembered and disposed of it. Officials who have heard audio of the operation said that one of the Saudi operatives — who has a background in forensic crime-scene work — can be heard warning other operatives to play loud music to mask the sound of an electric device.

Saudi authorities have announced investigations of 21 people in connection with Khashoggi’s killing, including Saud al-Qahtani, an enforcer for the crown prince suspected by some of orchestrating the operation against Khashoggi.

Prosecutors are seeking the death penalty for five operatives who traveled from
Riyadh to Istanbul and were in the consulate when Khashoggi was killed. They include Maher Mutreb, a former colonel in the Saudi intelligence service who knew Khashoggi when both worked in London at the Saudi Embassy.

If the men are convicted and sentenced to death, the Saudi system of justice could allow the Khashoggi family members to grant their father’s killers clemency as part of a “blood money” arrangement in which they might then be entitled to tens of millions of dollars.

It is unclear whether Khashoggi’s children would be required to forgive or absolve the killers to collect the payments.

Former Saudi officials and experts said that the royal court and government have incentives to seek such an agreement and avoid a situation in which only low-level operatives are executed for their role in a plot that was developed and orchestrated from high levels of government.

The issue of how far to go in protecting their father’s legacy has been a source of tension among the Khashoggi siblings, according to people close to the family. The daughters have at times pushed to be more outspoken about their father’s life and the kingdom’s ruthlessness, while the brothers have focused on maximizing the amount of money the family will collect.

At one point in the weeks after their father’s death, Abdullah Khashoggi told advisers working with the family that he wanted to punish the royal court by going after one of the crown prince’s prized possessions. “I want the da Vinci,” he said, referring to a painting by the Renaissance master that the crown prince paid $450 million for in 2017.