Kazakhstan’s Anti-Russian, Pro-Moscow Leader Resigns After 30 Years at the Helm

The ally of Moscow, the bane of Russian language and people in Kazakhstan 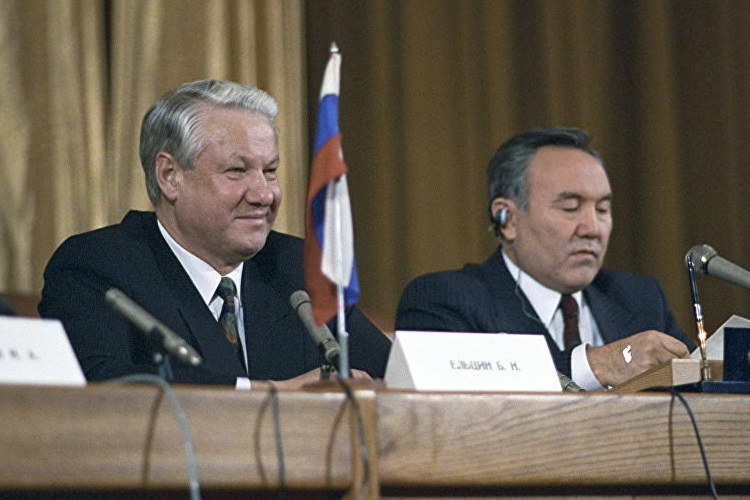 RT accompanies reports that Nursultan Nazarbayev has stepped down as President of Kazakhstan with a characterisation of him as a “key Russian ally”:

This should be heavily qualifed.

For nearly 30 years Nazarbayev pursued de-Russification policies to push back against the use of Russian language by the state, in public life, and privately by ethnic Kazakhs, and to limit the autonomy of influence of ethnic Russians in the north of the country where they form a solid majority. He also ruled that Kazakh language would gradually by 2025 switch from the Russian-derived cyrilic to latin alphabet.

In the 1990s he moved the capital from the Kazakh south to the Russian north allowing the state to control it better and to dilute the Russian majority with new-arrivals. He presided over an exodus of ethnic Russians which saw their share of population decrease from 40 percent (6 million) in 1989, to 20 percent today (3.6 million), partly also due to somewhat greater natural increase among Kazakhs:

There are now just 3.6 million Russians in Kazakhstan (20% of the population), down from 6.0 million in 1989 (40%). Other European minorities, such as Ukrainians and Germans – and Koreans, who in practice identify with Europeans in the Central Asian context – add up to less than another 5%.

Furthermore, 2/3 of them want to emigrate due to Kazakhstan’s language policies and worsening inter-ethnic relations.

I am not surprised this is the case. I have read and heard – including from a couple of first hand sources – that Kazakh hiring practices in state institutions (e.g. academia) are highly nepotistic, favoring well-connected ethnic Kazakhs. There are no real opportunities for the Russians remaining there, apart from serving Kazakhs as a kind of cognitive caste (e.g. engineers at oil wells).

And yeah, landlocked, far from the West, and with a long border with Russia, he also pursued moderately pro-Moscow policies. He accepted membership in the Russian-led CSTO military treaty and the economic-orientated Eurasian Economic Union, as long as Moscow did not challenge his rule in Kazakhstan including his de-Russification policies.

I wouldn’t call this guy a friend of the Russians or a “Russian ally”.

He has now resigned as President as part of his long-term plan that he has been puting in place for a few years now, to steer the succession process and hand-pick and entrench his successor before he dies, perhaps the son-in-low Timur Kulibayev or the great nephew Samat Abish or another loyalist. He will continue to wield decisive power in the country until his death or incapacitation, however from the other positions he holds: party leader, “Leader of the Nation”, Security Council head.