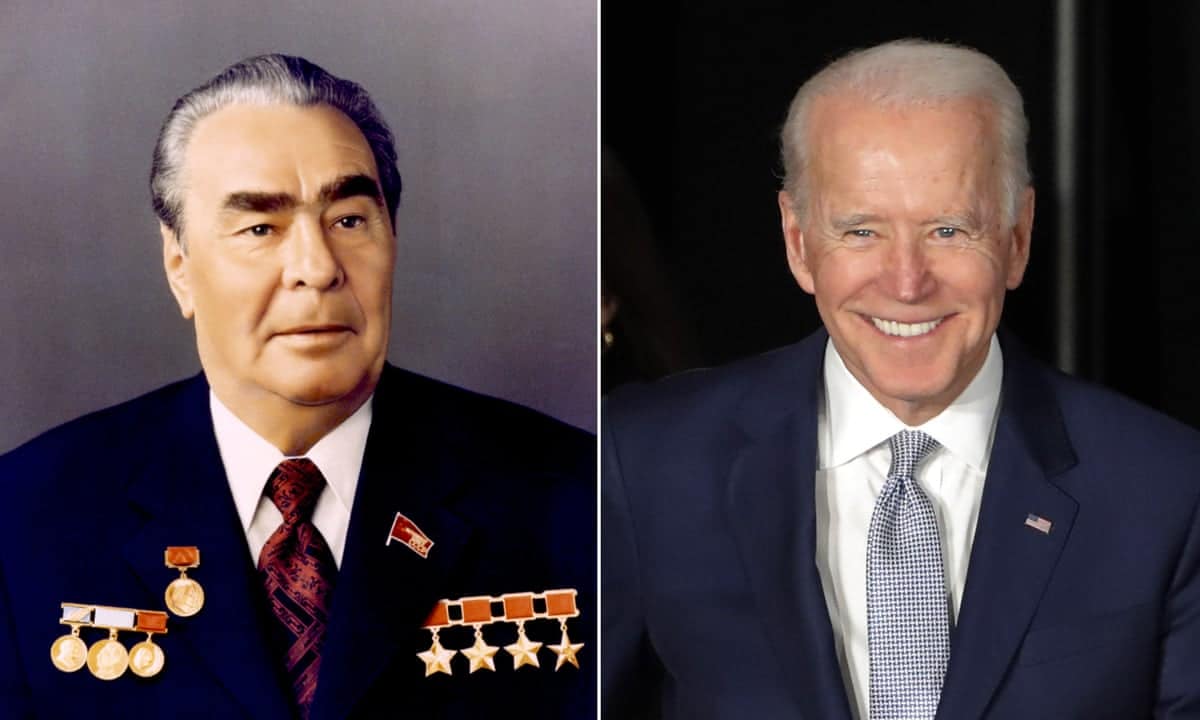 A few days ago, I mentioned that the same-day response on Russian airwaves to President Biden’s calling Vladimir Putin a “killer” was to consider the mental health of the American president, then to conclude that he was not suffering from dementia. This rough and ready appraisal of Joe Biden was based on his not showing disorientation and his apparently still good memory.

However, on reflection, it is clear that the Russian elites have concluded that the best way to deal with Biden’s verbal aggression is precisely to cast him as senile. That resonates with middle aged Russians who remember very well their own succession of Communist Party bosses who had one foot in the grave at the same time they had one finger hovering over the Red Button of their nuclear controls.

In his last years, Brezhnev may have been only in his low 70s, but he was suffering from debilities that could not be concealed from the public: wearing a bulky and visible hearing aid, speaking with a slur that was due either to a stroke or some serious dental problem, appearing puffy and walking with difficulty, Brezhnev was carried along by his aides more for their benefit than for his.

His immediate successor, KGB boss Yuri Andropov, was seriously ill at the time of his appointment as General Secretary and held office for fourteen months before he was carried out feet first.

Then came another member of the Old Guard, Konstantin Chernenko, who was suffering from emphysema and could barely breathe when he was elevated to the top post. He stopped breathing altogether nine months later

This past Soviet experience with overaged and underperforming leaders came to an end with the installation of the vigorous and youthful Gorbachev in the mid-1980s.  It was more than compensated for by the elevation of the still younger and more vigorous Vladimir Putin at the turn of the new millennium.

This recent history was recited last night on the country’s leading weekly news program Vesti Nedeli by presenter Dmitry Kiselyov, who happens also to be the general manager of all Russian state news programming. This, to help the Russian audience understand what is now transpiring at the apex of American political life, where Joe Biden is just an old, debilitated and psychologically abnormal commander in chief.

The preceding days provided Kiselyov with a fine harvest of video images to support this case, most notably of Biden stumbling badly when ascending the stairs to board Air Force One at the start of his trip down to Atlanta for consultations over the murder of eight Asian American women in massage parlors. Then there was the video clip of Biden presenting his Secretary of Defense but failing to remember his name and coming up only with “General”…. And there was Biden calling Kamala Harris the “President,” as if he forgot or was no longer aware of who is who.

All in all, Kiselyov took about 30 minutes on air to reduce Biden to a sniveling and senile “old fart,” as the Russians like to say about such cases.

This, combined with extensive reportage on Americans who have written to the Russian embassy in Washington to apologize for the gross violation of normal interstate civility by their president, with coverage of Turkish President and other world leaders condemning Biden for his grossness, made for an entertaining evening that, exceptionally in this spring of Third Waves, was not sunk by horror stories about the Covid pandemic.

The logic of this treatment of the Biden affair is clear. By responding to an ad hominem attack on their leader with an ad hominem attack on Biden, the initiator of this exchange, presenting him as an old fool, they have taken the sting out of the U.S. president’s remarks. At the same time the anti-Americanism implicit in the report is veiled by saying, in effect to America: “we know what you have in the Oval Office since we have gone through that same patch ourselves.”

And so, Russian elites had a good laugh at America’s expense and are well prepared for a sharp cutback in diplomatic exchange with the USA.

What, we may ask, has the U.S. gotten from Biden’s verbal indiscretions?