AQ-led rebels take back a town, expose the limits of a Syrian offensive over a narrow sector of the front alone

Of the two bigger towns taken by the Syrian army since the start of its offensive earlier this month one has been restored to rebel control. The Islamist rebels accomlished that in a large counterstrike spearheaded by two car suicide car bombs, supported by rocket artillery and involving tanks and armored transporters and several hundred experienced troops bused in from other sectors of the front.

#Syria: ongoing attack started with an #HTS SVBIED which blew up at the gates of #KafrNabuda in N. #Hama countryside. pic.twitter.com/9NbCatUIZh

Casualties were heavy on both sides, but after two days of fighting it is the al-Qaeda-led rebels who are in control of the center of the town, but fighting continues on the outskirts. Apparently on the first day the rebel attack was first repulsed, but during the night and the next day the balance swung to the jihadi side. First day according to the Russian Ministry of Defense:

More than 500 militants, seven tanks, four APCs and 30 trucks with mounted machine guns and two explosive-laden vehicles, driven by suicide bombers, took part in the assault, on Wednesday morning. They were backed by another 200 gunmen, and hardware, attacking the government forces from the other side.

The offensive failed as the Syrian military killed 150 terrorists and destroyed three tanks, as well as 24 trucks with mounted machine guns during the heavy fighting.

The rebels even had the support of rocket artillery, some of it improvised:

#Syria: #HTS shelled today the Istamo Helicopter Base located on Coast with a barrage of Grad rockets. https://t.co/ez7mkqtZnv pic.twitter.com/enAJVkI7Cy

#Syria: as part of pre-emptive bombardment, #HTS targeted #KafrNabuda front with waves of (DIY) Elephant rockets (not seen since 2017). pic.twitter.com/XHTFXYVjHg

Armored cars supplied by Turkey were used as well:

I am surprised that jihadis can concentrate so many vehicles, armor included in one place and use them to good effect. It’s clear the rebels are concerned about the air power on the other side; they opted to have a lot of the fighting done during the night, and you can see on the photos they were burning tires for smoke cover. Nonetheless, even by Russian information they lost only the smaller part of their armor, probably nearly all of it to portable anti-tank missiles, not tank-busting Su-25s.

More broadly the success of the rebel counterstrike exposes the limits of the Syrian-Russian offensive. The government side has more troops, and much more firepower. They could not stand up to a determined all-out Syrian effort along the whole length of the front.

However, because the army is out of political considerations attempting to advance only on one narrow section of the front, the rebels can shift all their best and reserve units there. And are then able to trade blows with the army in that narrow sector of the front on an equal footing, as just happened.

For a successful advance rebels would have to be threatened and pinned down along most of the front.

Moreover, the rebel counter-attack took place after they had had three-days respite on the account of a temporary cease-fire pushed through by Russia and Turkey during which Russian air assets were inactive. In other words, meddling from politicians allowed al-Qaeda and friends to prepare to strike back.

During the preceding days: 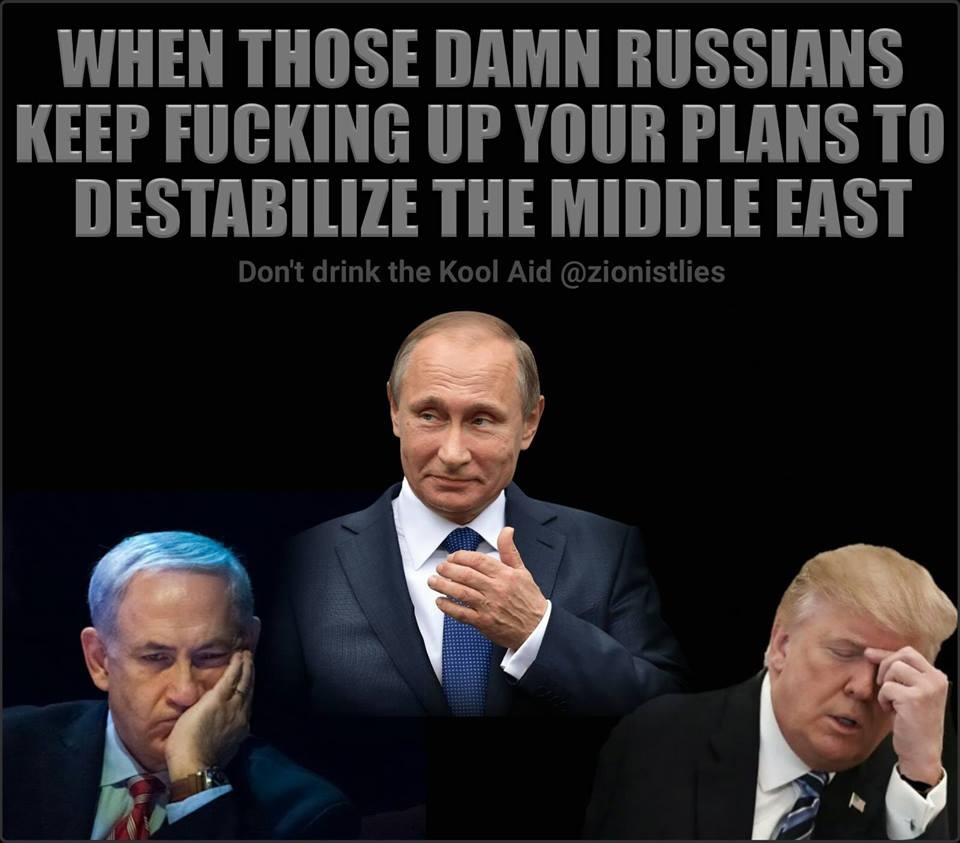 Rebels are making Assad look like a tyrant no different from sisi netanyahu or bin salman.

So given that Iran China Russia Venezuela face sanctions, its better to support Rebels against kurds altanf and finally to take Golan.

Of course Rebels would never accept Assad unless Assad adheres to the Islamic Rules that he professes to. And this is what makes Iran look bad given that Iran is an Islamic Republic.

The number one rule is you can Ally with anyone against nato zios or even saud, but turn their guns against your own kind, is apostacy, regardless of how much firepower and support you have.

Assad makes Hezbollah look bad also, which explains why Hezbollah has plateaued ever since even stepping foot in Syria, losing respect from all Sunnis outside of Syria around the World.

Everyone knows Assad is an antizionist, but he really does have 1. murder on his hands 2. and is apostate.

What are we supposed to do with someone like that?

We cant be cucks and just give in to his hard gay army.

We cant takfir him given he says hes Muslim.

Assads problem started when he wanted to be a doctor and ran off to the uk, instead of caring about Syrians.

It was good that he ran to Russia, but very evil to tell Russia to bomb Sunnis, that even Russia is likely to face decades of repercussions from this betrayal.

We still have kurdistan, altanf, Golan, and Jerusalem, so if Assad still wants to end up a winner, he needs to apologise to Erdogan, just like Erdogan apologised to Russia, but for thousands not just killed, but tortured, starved, abused, oppressed, and neglected.

Im betting that there is so much pressure that Assad has already started on this. It wont be easy, but given what us Rebels have had to tolerate all these years, its not comparable. Im not really even a full on Rebel, because most want Assads head on a plate, and theres nothing I can do about that.

Maybe the rebels are not backed by Nato but they do share the same interests and they are backed by regional power specifically Saudi and Turkey along with the US and Israel.This is not some sort of exaggeration because they demonstrated their support through the weaponry in the rebels’ hands on many occasions.During the two- day ceasefire it is said that advanced missiles to deter the offensive. I agree the government has committed deadly mistakes but the rebels are not to be the alternative,too.Maybe this civil war will go on until an alternative float on the surface, an alternative that can calm the worries of the non-sunni 41% and the secular sunnis and convince the opposition to support him instead of the Alqaeda fighters then the war may come to an end. So far none of the conflicting parts is showing any kind of forgiving. Both had bleeded too much to reconcile.The only way out is through the victor to give concessions. At least may be then the loser’s demands for revenge would lower.

Ill keep this one as short as possible, but Turkey is going to overpower Assad and Iran, even though it would never do so under any circumstances, except to preserve Muslim Brotherhood and Ikhwan, that khamenei has shown no signs of reconciling with, a fatal potential disaster especially given Imam Khomeini(rh)s words to Hafez not to fight MB, and given that Turkey relies upon 50% Shia Hadith because Turkey has
Sufi line of Isnads, that even I as a Shia would accept (I would say that Turkey is more Shia in practice than Iran and side with Turkey, in the event of a full blown sectarian war over Idlib).

I was closely following when Assad was almost wiped out, and as a Shia myself and having lived in both Iran and Turkey, I wasnt supporting his elimination. I was actually supporting his overtures to reconcile, regardless of how it all started, and overlooking any flaws either side may have had.

And in the exact same way, even as a Shia Ive been defending the now less than 59% Sunni as youve mentioned, when total Muslims on wikipedia shows as 87% which implies that its Native Sunnis who have been displaced, even though 90% are said to be supposedly willingly be in SAA, although the last new batch were recent defectors who wanted to reconcile yet were placed on the frontlines.

Ive read that Ahrar AlSham had saudi support, whether from bin salman or just saudi commoners, I dont know, but I have never supported them, nor fsa prior to TFSA, despite knowing that many have cross border Families and Friends who are from mostly Sunni backgrounds.

And I lve never advocated the harming of any minority in Syria, unless any minority is harming the rest. But the biggest damage worldwide has been to non saudi allied Sunnis mostly from primarily peacful Muslim Brotherhood and Ikhwani, who were already cast out from saudi arabia and even persecuted in Egypt, when both Imam Khomeini(rh) and khamenei used to have very good yet fragile relations with them and their founder Seyed Qutb(rh).

So it wasnt me who destroyed that relation. And Ive never supported Muslim Brotherhood or believed they would succeed, but I still believe they deserve 90% representation and not just a cucked voting rights but military power.

And judging by recent events its clear that the willingness of Rebels to fight is much higher than those in saa, even given that saa is likely 90% Shia controlled or even Russian controlled.

So even as a Shia Muslim myself, I know that my own Creator(swt) has allowed me to seek Russias help against nato and zios, but has forbidden me to use them against any Muslim.

And your last comment, is true from an Islamic perspective, that two Muslim groups in dispute are allowed to resolve it by overpowering the other.

We would both agree that this doesnt apply to zios using nato to overpower Gazans or Humanity around the World.

But Assad inviting Iran and even Russia is ok. But Rebels inviting Turkey, and even nato actually makes it ok also. But setting up a Russian base without the consent of the other, is indeed a violation, whereas its crystal clear Rebels know they cannot allow a nato base.

Afghanistan was similar, nato supported AlQaeda against soviets, even though AlQaeda is doctrinally against both, but again AlQaeda had no intention of allowing soviet or nato bases in Afghanistan, if you understand where Im coming from.

Today we see AlQaeda and Taliban fighting nato in Afghanistan under this same principle.

Thats why Im recommending that Assad skip the Idlib step and move forward with the kurds or altanf or Golan itself, because there is no sectarian or factional conflict in fighting nato allied kurd bases or nato altanf bases or zio occupied Golan.

As an Abrahmic Believer Im not allowed to choose sides between Believers, regardless of how strongly I feel about my side. And I certainly cannot say another Believer isnt a Believer.

And this is why I can only fight isis zios nato and saudi and no other. I cant even or dont even want to fight kurds except they willingly let in both zios and nato bases, just like afghan govt.