J-20: China’s New Fighter Jet Is a Marvel, But Not for the Reason You Think

As China’s new J-20 fighter made its debut at an air show last week a flurry of writing followed reminding us the plane is not the equal of America’s F-22 and likely couldn’t go up against the Russian Su-35.

That is likely true. China can’t quite match the Russian or American tech just yet. So yes, the J-20 isn’t as stealthy as the F-22 (with those large canards and open engine exhausts it can’t be) and isn’t as maneuverable as the Su-35 (it so far lacks thrust-vectoring engines).

It might be misguided to read too much into these shortcoming, however, as the intended role of the new Chinese jet is not yet clear. It is perfectly possible that J-20 with its enormous weapons bays wasn’t conceived primarily as an air superiority fighter, but as a long-range navy killer in which case direct comparisons to pure air-to-air fighters are of limited value.

Moreover, the more informative comparison isn’t between single weapons but between weapons programs. As such the J-20 program is actually enormously impressive.

The J-20 represents an enormous technological leap for China. One that has been delivered in just over a decade. The jet which was first heard about in the mid 2000s is on schedule to be introduced into service with the People’s Liberation Air Force in early 2017.

This is a feat that these days seems unattainable for either chronically underfunded Russian fighters or the supremely overambitious American programs.

Russians are developing their own 5th generation fighter, the PAK FA, but the program which begun in 2001 has suffered from numerous delays. 15 years later it is still in prototype phase. Even if serial production begins in 2018 as is the latest projection, this will follow a development cycle of no less than 17 years. Moreover even when ready it is doubtful the jet will ever be built in large numbers. (So far Russia has ordered fewer units than India.)

The first American F-22 fighter entered service in 2005 after development that begun fully 19 years prior in 1986. It is a technological marvel but bets heavily on stealth the value of which has yet to be proven in practice. Moreover up until 2011 when production was ceased the program had cost $66 billion. With 195 planes built this gives a fantastic unit cost of 340 million dollars.

The F-35 is worse. Lockheed Martin begun working on it in 1994. 22 years later the fighter has been pushed into operational service for PR reasons but is still not in serial production. Also the aircraft specifically advertised as affordable is now projected to cost the American taxpayer over one trillion (!) dollars. This as critics argue that the non-specialized, multi-role aircraft isn’t particularly suited to any of the missions it is supposed to perform. 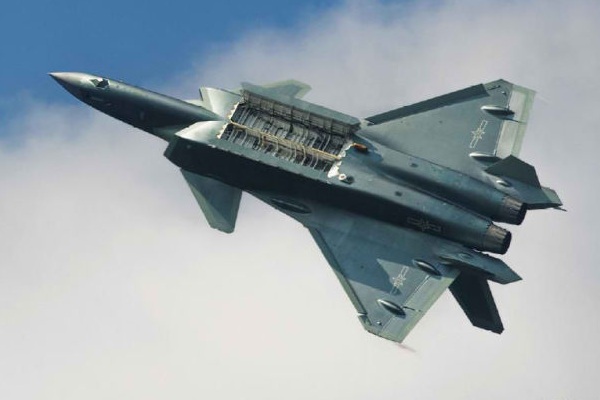 Compare this to the J-20 program:

The rapid development of the J-20 — from mock-up to low-rate production in less than a decade — has stunned aviation enthusiasts.

Rupprecht points out that Gen. He was correct in predicting the J-20 would be operational between 2017 and 2019, a prediction that had been initially met with considerable skepticism outside China.

Whatever the delays, difficulties, or costs — all of which are totally unknown thanks to the opacity of China’s military establishment — the plane has come in on time.

Rupprecht believes the J-20 is indeed on schedule, with a first flight testing and training squadron standing up in 2017 and a combat-ready unit to follow two years thereafter.

China has not produced the ideal aircraft but it has developed a fighter that drastically increases its capabilities and has done so in a reasonable amount of time. This is something that these days neither Russians nor Americans seem capable of.

Also it is almost certainly a far more affordable plane than its American competition and will likely ultimately be flown in greater numbers than the F-22 whom the US ultimately decided it could afford to field fewer than 200 units.

(While the Russian production runs are even shorter, and the F-35 is a boondoggle that threatens to drive the American taxpayer into the poorhouse.)

Lastly let’s point out the J-20 is an aircraft designed by the Chinese for the Chinese theater. Its emphasis on range might be just what China needs to thwart US encroachment:

Further, there is a strong argument to be made that short-range tactical fighters like the F-22 and F-35 are ill-suited for operations in the Western Pacific where distances are vast and bases are scarce. The same geographic constraints also apply to the Chinese.

That means that jets like the F-22 and F-35 need tankers to operate over those vast distances. The most logical way for the Chinese to tackle American and allied airpower is not to confront those forces head-on but rather by removing their ability to fight.

That means going after U.S. bases, tankers and communications nodes. Thus in that sense, the J-20 could be China’s means to establish air superiority if viewed through that lens. In that sense it might have the upper hand against the F-22.

The J-20 might not be the best plane out there but it is likely exactly what China needs, and is on track to go from an idea to a combat-ready asset in record time as well.