It’s No Threat. North Korea Has No Choice But Fire Missiles Over Japan

Look at the map, overshooting Japan is the least inflammatory option available to Pyongyang

Official Pyongyang sure talks smack about Japan, but is there any reason to view its missiles flying above Japan as part of that? Was the second North Korean missile over Japan in a few weeks intended as a threat to the nation?

The western media which is calling it an “act military aggression against Japan” sure thinks so. But actually there is no reason to think the missile tests have anything to do with threatening Japan per se.

First of all both of the missiles flew over the northern island of Hokkaido. Of Japan’s four main islands it is the least densely populated one. Surely if North Korea wished to maximize panic in Japan and tensions with Tokyo it would have selected a flight-path above Japan’s main cities instead.

Secondly, look at the map. North Korea is neither particularly large, nor particularly isolated. To test a long-range missile it has to fire it over somebody. Of all the available choices firing it eastward over Japan is actually the safest and the least inflammatory. 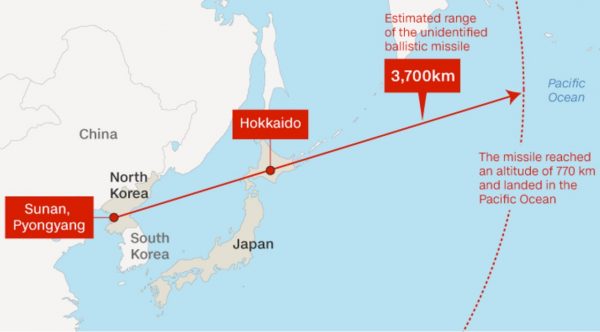 To the north and west of Korea are the giant land masses of China and Russia. It’s safe to say the two giants would not take kindly to North Korean missiles slamming 3,000 kilometers into their interior.

Moreover, firing a missile northward would be particularly risky as that is also the path a missile aimed for the continental United States would take.

A missile fired southward could slam safely into the sea, but the flight path would take it over South Korea, and could be mistaken for the start of attack against South Korea and the US military station there. It is probably the direction most likely to spark a war.

Sending a missile over Hokkaido is not a threat directed against Japan. It is just the safest, least threatening flight path Pyongyang can pick, assuming it wants to test its missile, and/or demonstrate their range for deterrence purposes.

Finally, the missile reached the height of 700 kilometers which is well above the edge of space. Yes, it was technically, for a short time, directly above Japanese territory, but it would be just as accurate to say the missile flew into cosmos and then slammed back into the middle of Pacific. Its point of impact was actually far closer to Russia’s Kamchatka than Japan.

The upshot is that for all the fear mongering of the media, the Japanese street does not appear afraid. A street interview series reveals ordinary Japanese remain calm and quite unconcerned. Many even reveal they are not paying much attention to the Korean crisis: