‘Xi in Rome: The escort fit for kings’ — that was the headline of one of Italy’s oldest and most read newspaper Corriere della Sera. The Chinese president Xi Jinping was greeted at the presidential Quirinale Palace by guards on horseback — an honour that was last bestowed on then-Pope Benedict XVI in 2010. Xi also attended a gala dinner at the Quirinale, with a concert by singer Andrea Bocelli. (Celine Dion once said, “If God would have a singing voice, he must sound a lot like Andrea Bocelli.”)

To be sure, Italy has pulled out the red carpet. Italy, being the cradle of Western civilisation, has a profound sense of history, and is intensely conscious that Xi’s visit is destined to be a seminal event of the 21st century that marks the resurgence of Asia and dawn of the era of Chinese influence.

Once again, Italy, which had given birth to the Renaissance triggering a combination of economic and political transformations in Europe that eventually led to nearly five centuries of Western dominance, is positioning itself as the vanguard and arbiter of a new global order that is taking shape. It is going to be a new era of ‘contested modernity’ where the central player will be China (to borrow an expression from Martin Jacques’ When China Rules the World: The End of the Western World and the Birth of a New Global Order.)

Perhaps, it is just as well that Italy, which is a civilisation-state itself, is assuming the role of the arbiter between the West and China. For, as Martin Jacques argues in his book, China will remain highly distinctive and is not to become a western-style society and its multi-faceted influence goes far beyond its growing economic dominance and is bound to be felt as political and cultural influence with imperatives, priorities and values that are quite different from the West’s. 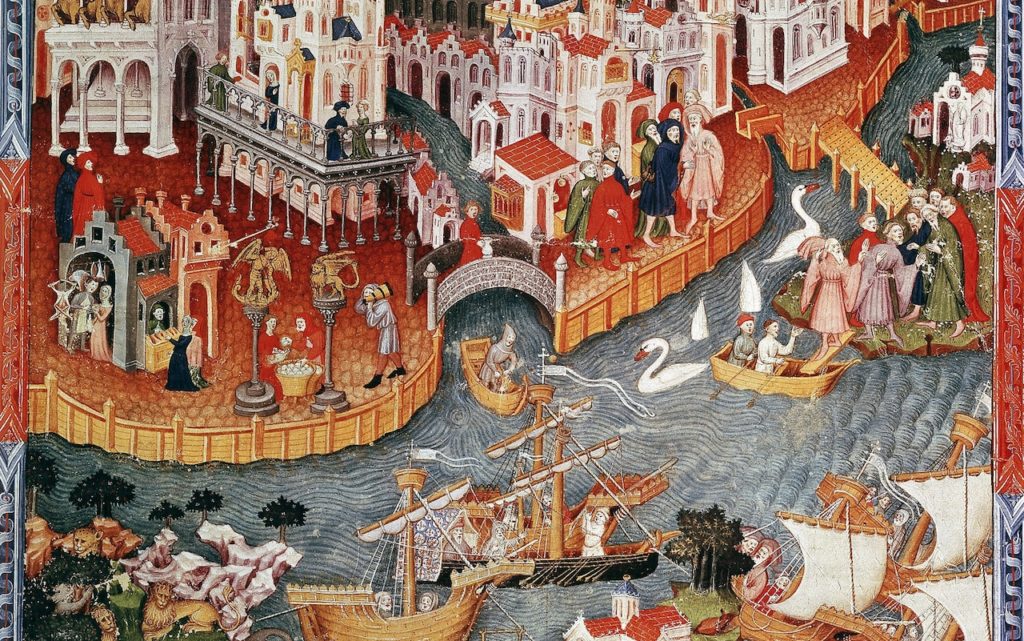 No doubt, China’s rise signals not only the end of the global dominance of the West. What is less obvious but eventually more poignant is that it also marks the emergence of a world which China is destined to shape in myriad ways, much of it increasingly disconcerting and unfamiliar to the West.

Therefore, the enormous resistance in the West, led by the United States, to Italy’s formal decision to formally participate join the Belt and Road Initiative (BRI) needs to be put in perspective.

Indeed, Italy has its motivations, too. Italy has decided to break ranks with the G7 since it needs money for infrastructure upgrading. A highlight of Xi’s visit was expected to be the signing of a memorandum of understanding, which should lead to increased Chinese participation in the historic port city of Trieste and perhaps three other harbours, including Genoa and Palermo.

It is what China would call a ‘win-win’. The BRI is a centre piece of Chinese foreign policy strategy and carries Xi’s imprimatur. Besides, Trieste, situated at the northern tip of the Adriatic Sea, is an ideal duty-free port in Europe for China to get easy access to European markets if it invests in ‘Make in Italy’ enterprises — assembling Chinese products with value added. For Italy, of course, that brings jobs to the region.

However, China also appreciates that Italy is exercising strategic autonomy when it turns its back on the US and the European Union by endorsing the BRI. A furious White House statement said, “Endorsing BRI lends legitimacy to China’s predatory approach to investment and will bring no benefits to the Italian people.”

But Italy has ignored the criticism. Italy is not in any mortal danger of falling into a debt trap, as interest rates on Chinese loans are not excessive for viable governments.

Also, Italy has no reason to identify with the US efforts to contain China’s expanding global influence, particularly with regard to strategic infrastructure projects such as harbours, airports and 5G networks.

The EU’s reservations are an entirely different affair. For EU, China is a ‘systemic rival’ (as against the US’ description of China as ‘strategic rival’), which poses threat to their industries. The EU shares some of the US concerns such as the lack of access to the Chinese market, forced technology transfer and exclusion from major Chinese projects. The EU’s trade deficit with China in 2017 was around US$200 billion or 30.7 per cent of total trade in goods between the two sides. But this is not a foreign policy issue for the EU.

In fact, on Tuesday, German Chancellor Angela Merkel pushed back against American calls to impose a blanket ban on Chinese telecoms equipment vendor Huawei, which would prevent it from providing gear for Germany’s 5G networks. Merkel said in Berlin:

“There are two things I don’t believe in. First, to discuss these very sensitive security questions publicly, and second, to exclude a company simply because it’s from a certain country. The (German) government has said our approach is not to simply exclude one company or one actor, but rather we have requirements of the competitors for this 5G technology.”

That is to say, while Germany is weighing strong requirement limits for Chinese telecoms equipment vendor Huawei and its regulators are drafting stricter requirements for operators and vendors on cybersecurity, Berlin has dismissed calls for blanket bans on Huawei and ZTE. Calling China a “systemic” competitor, Merkel said on Tuesday that “the answer can’t be that we fight those who are economically strong. We must stand up for fair, reciprocal rules and not give up on multilateralism.”

Interestingly, European leaders have an EU-China summit scheduled early April to debate trade relations, and the issue of restrictions on Chinese telecoms equipment vendors Huawei and ZTE is high on the agenda!

In sum, if Berlin and Paris have so far refrained from explicitly endorsing the BRI, the reasons are fundamentally different from those of Washington. As the well-known Sinologist Ambassador Chas Freeman noted this week in the context of Xi’s visit to Italy:

“From the US point of view, the objection to Italian outreach to China is just part of hysteria about China that has seized Washington. The US is treating the Belt and Road as a military strategic challenge. The Europeans are treating it as an economic issue that they need to be cautious about.”

“The Europeans are scrambling to come to grips with the fact that China is now a global great power, economically … the debate for them is less about Belt and Road than it is about the terms of Chinese investment and competition in the technology area. In the US, there is no debate. There is pretty much an anti-China consensus now.”

Suffice to say, by investing heavily in Greece, Italy and other EU countries, China would hope for more European endorsement of the BRI that would also incrementally undermine European resistance to Chinese influence. As a matter of fact, the ‘16+1’ group that was formed in 2012 bringing together China and the relatively poor countries of central and eastern Europe is already a testing ground for the BRI.

Italy’s MoU on BRI is the first of its kind. But nearly half of EU members have already agreed to participate in the BRI. Italy is just the first large economy to do so. The Italy-China MoU could be a template for other EU countries and improve the negotiated standards between the EU and China. In a nutshell, Italy has opened the door for BRI to step into the heart of Europe.

Italy has signed up for China’s multibillion-dollar “Belt and Road Initiative”, becoming the first Western European nation to jump on board despite scepticism from its EU counterparts and Washington.

Italian Prime Minister Giuseppe Conte and Chinese President Xi Jinping witnessed the signing of a memorandum of understanding on Beijing’s trade and infrastructure scheme on Saturday in Rome.

Among the 29 other agreements signed were two port management deals between China Communications Construction and the ports of Trieste, situated in the northern Adriatic Sea, and Genoa, Italy’s biggest seaport.

While Genoa is a long-established port, Trieste has the most potential for China, Italian government sources earlier told the South China Morning Post.

The port is strategically important for China because it offers a link from the Mediterranean to landlocked countries such as Austria, Hungary, the Czech Republic, Slovakia and Serbia, all of which are markets Beijing hopes to reach through its belt and road programme.

Although full details of the contracts were not given, a government source told Reuters the deals could be worth up to €20 billion (US$22.64 billion). The value was estimated at around €5 billion by Italian media.