Is Kim Jong Un the Absolute Ruler of North Korea or Just a Hostage to the Shadowy OGD?

Kim is just one player, and not necessarily more powerful than the country's all-pervasive surveillance apparatus 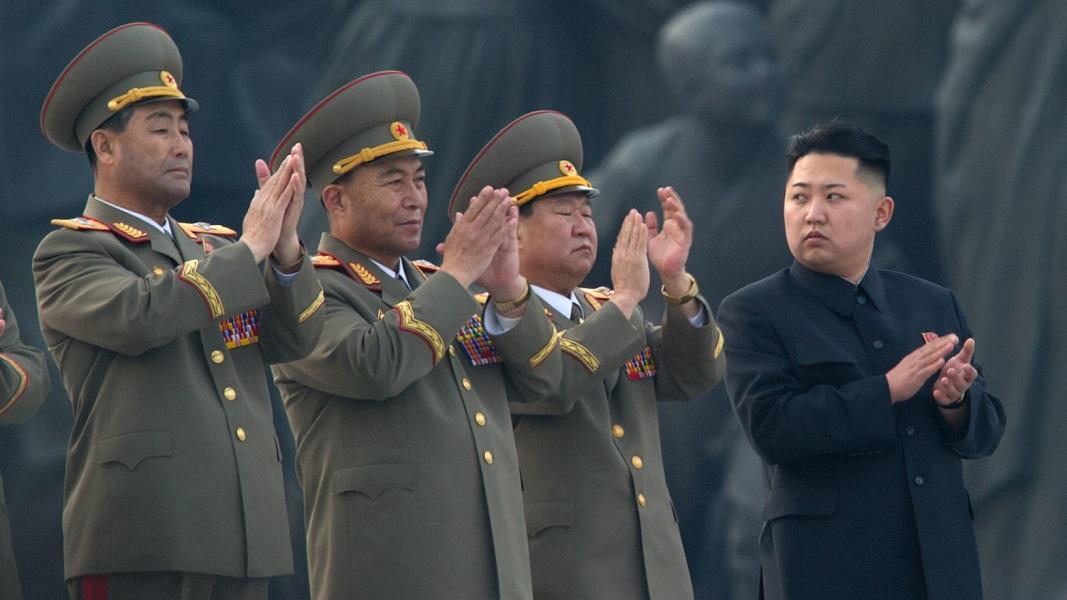 The text which follows is excerpted from the excellent book on the country, North Korea Confidential: Private Markets, Fashion Trends, Prison Camps, Dissenters and Defectors.

That organization is the OGD (Organization and Guidance Department), and it represents the summation and natural extension of what Kim Jong Il learned during the early stages of his rise to power, particularly the Three Revolutions period. Through surveillance and the re-routing of information and reporting structures, the OGD has come to be the only part of the state that sees and knows everything. Though many famous figures have been ousted following Kim Jong Il’s death—including General Ri Yong Ho and Jang Song Thaek—the OGD leadership is essentially unchanged.

The OGD has existed since 1946, but its role was reinvented following Kim Jong Il’s accession to its directorship in 1973, when he began to use it as the main means by which to take control of the state. The OGD since then has risen to become the central hub of power in North Korea. It possesses a file on “anyone who is anyone”; it is the conduit via which the various branches of government communicate with the Supreme Leader, passing instructions down and information up; it is responsible for implementing and enforcing policy; it runs a network of spies that reach from the highest army general to the lowest provincial factory manager; it “signs off” on any government or military appointment; and it is essentially in charge of the personal security and well-being of the ruling family.

So while one may consider a high-ranking army general or minister to be powerful—and indeed he would be, within his own organization and network—ultimate power flows through the OGD; nobody else has full organizational visibility. Thus, while the outside world may have been watching bodies like the Politburo, such “traditional” Kim Il Sung-era organizations had lost much of their real power to the OGD. That may have been Kim Jong Il’s smartest trick of all: to shift the power base without outsiders realizing. It has been reported that he liked to say “we must envelop our environment in a dense fog, to prevent our enemies from learning anything about us.” And certainly, he knew well how to achieve that.

But how does the 300-man OGD “run” North Korea today? Let us now examine in more detail the powers it holds, starting with its control over personnel. To Illustrate by way of example, imagine you are a factory manager at the Chollima Steel Complex, one of the DPRK’s most important state-owned enterprises. A promotion comes up—the crucial role of party secretary for the factory. You may be asked if you are interested, or you may apply for the role on your own initiative. You respond affirmatively, and the OGD goes to work, consulting its network of informers. As with the East German Stasi, the OGD “has a file on you,” one which is held at the Central Party Complex in Pyongyang. There are such secret files on at least every Party member or would-be Party member (meaning a minimum of three to four million people), and unlike the “regular” government file, which is more like a standard resume/curriculum vitae, the OGD file contains details about your private life: weaknesses for alcohol, gambling, drugs, or women; extramarital affairs; comments made ten years ago that could be potentially construed as disloyal; information about old school friends; and so on. The file is built up over time via reports sent to the OGD from any informers you came into contact with throughout your life.

The OGD also maintains a so-called “party life” score, which measures your participation in Workers’ Party events, or whether you participate enthusiastically in “voluntary” labor projects, for instance. Using this, and your background check, the OGD decides whether you are acceptable or not. If everything clears, they recommend that the Supreme Leader appoints you, and you become party secretary for the factory.

But what of truly senior people, such as army generals? The same system applies to them, too. The OGD actually has two sections to deal with the military. In 1991, Kim Jong Il decreed that all generals undergo “Party Lectures,” run by a supervisor who answers to OGD Section 13 (responsible for military “guidance”). This means that they are taken away for two weeks, and kept in dormitories with other generals. They are subjected to propaganda and public criticism sessions, so as to instill compliance and fear. After this process is complete, the OGD decides which of them to promote or demote through OGD Section 4, which handles military appointments.

The DPRK publicly proclaims itself a songun (military first) state. And while a great proportion of the nation’s resources are, indeed, channeled into the military, military appointments are ultimately under the control of the Party, or specifically the OGD (which is officially a part of the Party). It is not uncommon for non-soldiers to be appointed to very senior military positions. Hwang Pyong So, a career-long OGD man, currently heads [text is from 2015] up the organization’s oversight of military affairs as deputy director—and is a Sangjang (colonel-general, just one step under full general, though he is certainly more powerful than any general with a conventional military background). In May 2014, he was also named Director of the General Political Bureau of the Korean People’s Army—the second-highest ranking military title, after Supreme Leader Kim Jong Un.

This in itself does not make Hwang Pyong So powerful. His predecessor Choe Ryong Hae held the title for a short time, and was then pushed out; sources say Choe was never as important as commonly assumed. Rather, Hwang’s new title is better seen as an official stamp of approval on the power he already had.

Tipping the balance even further away from career soldiers is the fact that different military units in North Korea are not allowed to communicate directly with each other. This helped Kim Jong Il centralize power, and protect himself against possible coup attempts. It is quite fanciful, then, to postulate that a “rogue general” could secretly gather up enough supporters and overthrow the regime, or indeed sell nuclear material to Al-Qaeda. Even talking of “reformist Party officials versus hard-line generals”—as we see so often in the Western press—is not helpful or accurate, since there are plenty of people with one foot in both camps. And regardless, appointments to both will have been approved by the Kim family-OGD nexus to serve the same purpose: the preservation of the system.

Control over appointments is only a part of the OGD’s power, though. The OGD has the right to issue “guidance” to all branches of the state apparatus. This basically means that the OGD can intervene in any administrative matter it wishes, as well as enjoying ultimate control over the public criticism sessions and propaganda handed down to factory workers, soldiers, university professors, and so on. Organization secretaries are sent to each body to pass on this guidance, and as such may overrule the titular boss of the factory. As if that were not enough, a covert “notification instructor” is also placed within each organization, to spy on the organization secretary and report back to the OGD. This notification instructor may simply appear to be a shop floor worker, but in reality, he is an important part of Kim Jong Il’s system of centralized control. Jang Song Thaek himself was a notification instructor early in his career.

Officially, military guidance comes through the General Political Bureau, which has commissars serving as majors or captains across all military units. These commissars can overrule their generals, though the general does have the right to appeal. The General Political Bureau ultimately answers to OGD Section 13, as ordained by Kim Jong Il in 1992 in a speech to senior officers. As a result, even generals fear the OGD.

Probably the only thing of consequence the OGD is not supposed to do is issue policy. That is the Supreme Leader’s job. The Supreme Leader’s word is law itself, quite literally: if Kim Jong Il said to an aide, “Women should be made to wear traditional Korean dress,” then the aide would note this down, and it would become policy. But it is the OGD that is responsible for processing and documenting that note, and implementing the new rule throughout the various branches of the state. And when policy suggestions come up from the bottom, they come up through the OGD.

Finally, OGD members are heavily involved in the household management and protection of the Kim family. There are believed to be nine deputy directors of the OGD (and no director, since the death of Kim Jong Il), and while four of them have “proper” OGD roles—probably the two most powerful being Hwang Pyong So (in charge of military affairs), and Kim Kyong Ok (surveillance)—it is understood that the remaining deputy directors are in charge of the leader’s Personal Secretariat(PS).

Nobody would say “I work for the Supreme Leader”—it is practically taboo to even talk directly about the Supreme Leader in Pyongyang, other than to praise him in general terms—so the OGD deputy director role in this case functions as a cover, as well as justifying the huge perks given to those high up in the Personal Secretariat. Such perks include overseas travel; overseas education for one’s children; and access to the Bonghwa Medical Center, a world-class hospital providing care that the average North Korean cannot even dream of.

The Personal Secretariat has multiple functions: it acts as a “gatekeeper” between the Kim family and everyone else; it coordinates the Supreme Leader’s schedule; and, it takes care of logistics and security arrangements whenever the leader goes anywhere. These arrangements can be extremely complicated and even unpleasant, according to one source: on the rare occasions when Kim Jong Il traveled abroad, PS underlings were tasked with collecting the leader’s faeces and urine from special toilets they brought with them. This was, apparently, to prevent foreign agents obtaining Kim Jong Il’s DNA profile.

In that sense, North Korea has something in common with other countries. The DPRK has an identifiable figurehead, but behind him stand a layer of powerful people with interests and inclinations that do not necessarily always match. If a “hard-line” policy is followed by a “reformist” one, or a “rising star” is suddenly pushed out, it does not mean that “absolute dictator” Kim Jong Un is mercurial and unpredictable. It means that neither he, nor any one other individual, is in full control.