Brilliant idea by the US to bomb government-sanctioned paramilitaries

Dozens of protesters broke into the US embassy compound in Baghdad on Tuesday, smashing a main door and setting fire to a reception area, prompting tear gas and sounds of gunfire.

Witnesses reported smoke rising from inside the compound and said they saw at least three US soldiers on the roof of the main building inside the embassy.

It was not clear what caused the fire at the reception area near the parking lot.

A man on a loudspeaker urged the protesters not to enter the compound, saying: “The message was delivered.”

Footage of US soldiers guarding the American Embassy in #Baghdad and protestors separated by a pane of glass.

The US ambassador to Iraq and other staff were evacuated from the embassy.

Earlier, hundreds of protesters gathered outside the embassy to decry US air attacks in Iraq and Syria that killed 25 fighters from an Iran-backed Shia group.

Shouting “Down, Down USA!” the crowd hurled water bottles and smashed security cameras outside the embassy grounds.

“We recall that any aggression or harassment of foreign embassies will be firmly prohibited by the security forces,” Abdul Mahdi’s office said several hours after the attack began.

The US military carried out the strikes on Sunday against the Iranian-backed Kataib Hezbollah. Washington claimed it was acting in retaliation for last week’s killing of an American contractor in a rocket attack on an Iraqi military base that it blamed on the group.

The protesters raised flags of the powerful paramilitary group Hashd al-Shaabi (Popular Mobilization Forces), of which Kataib Hezbollah is part, and several people climbed over the wall of the embassy and chanted “Death to America” and “No, no America”, witnesses said.

Tuesday’s attempted embassy storming took place after mourners held funerals for fighters killed in a Baghdad neighbourhood, after which they marched on to the heavily fortified Green Zone and kept walking until they reached the embassy.

Security guards were seen retreating to the inside of the compound. Protesters were also seen hanging yellow flags belonging to the Kataib Hezbollah on the walls.

Reporting from Baghdad, Al Jazeera’s Simona Foltyn said there was no indication of an armed confrontation.

“This entire funeral procession, consisting mostly of PMF members and their followers, has entered through these gates without any resistance whatsoever from the Iraqi security forces that are supposed to guard the Green Zone,” she said, speaking outside the US embassy.

“We’ve seen in the past when anti-government protesters were able to enter the Green Zone but I don’t believe we’ve seen such a large number of people come this close to the US embassy,” she continued, calling the development “significant”.

A sight I didn't expect this morning when we set out to cover a funeral processions. Thousands of PMF marching through checkpoint leading to US embassy, with no effort by Iraqi sec forces to stop them pic.twitter.com/FRyL2L8vhc

“It remains to be seen how the authorities will react and more importantly, how the US will react,” Foltyn added.

The US raids – the largest attack targeting an Iraqi state-sanctioned group in recent years – and the calls for retaliation represent a new escalation in the proxy war between the US and Iran playing out in the Middle East.

The US military said “precision defensive strikes” were conducted against five sites belonging to Kataib Hezbollah, which is a separate force from the Lebanese group Hezbollah, in Iraq and Syria. 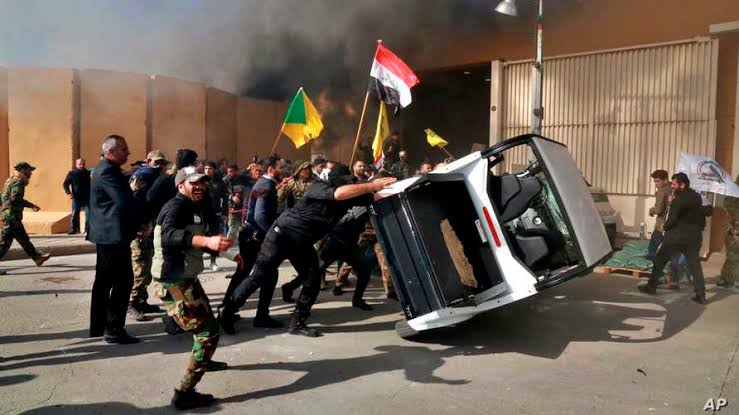 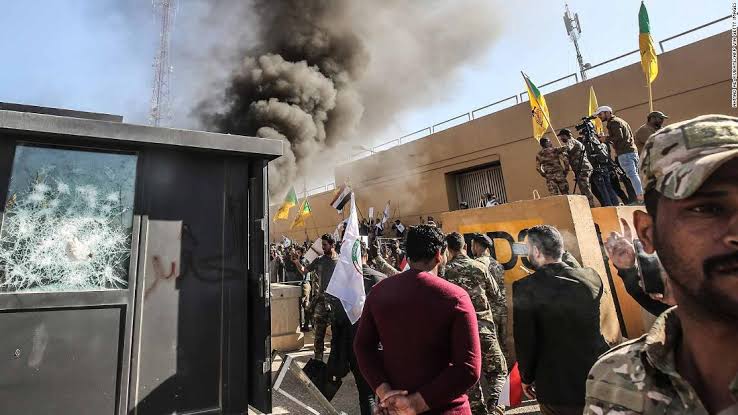 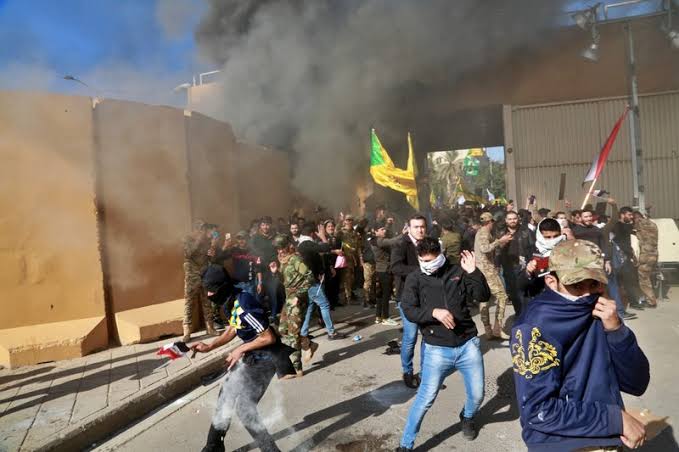 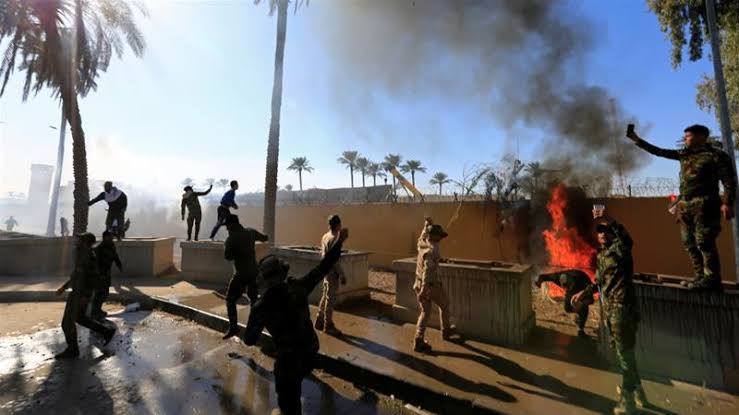 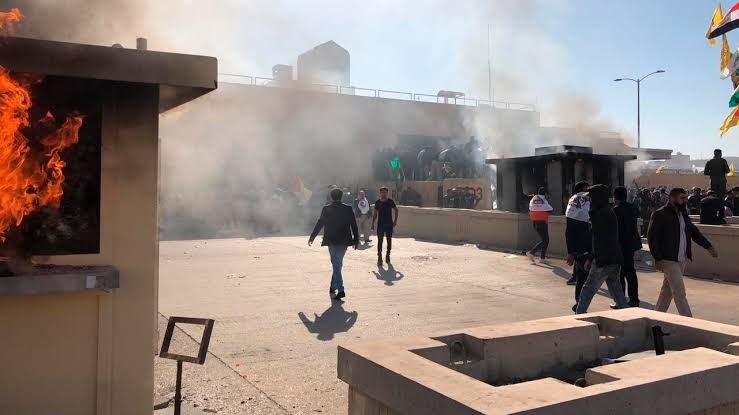 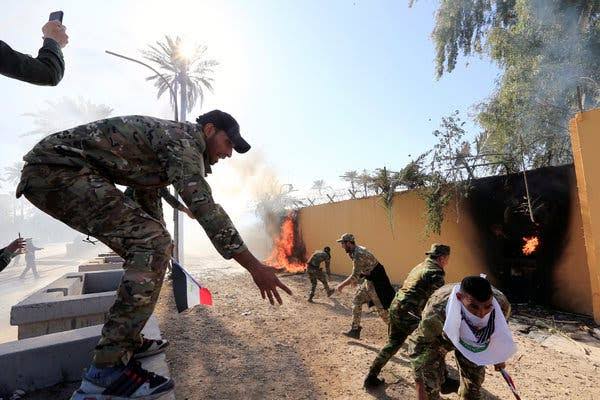 Iran killed an American contractor, wounding many. We strongly responded, and always will. Now Iran is orchestrating an attack on the U.S. Embassy in Iraq. They will be held fully responsible. In addition, we expect Iraq to use its forces to protect the Embassy, and so notified!

To those many millions of people in Iraq who want freedom and who don’t want to be dominated and controlled by Iran, this is your time!

VIDEO: AH-64 Apaches protect @USEmbBaghdad. 🚁“We have taken appropriate force protection actions to ensure the safety of American citizens…and to ensure our right of self-defense. We are sending additional forces to support our personnel at the Embassy.”~@EsperDoD 🇺🇸🇮🇶 pic.twitter.com/amABHBAOcL