Iranian Warships Traverse the English Channel on Way to Russia 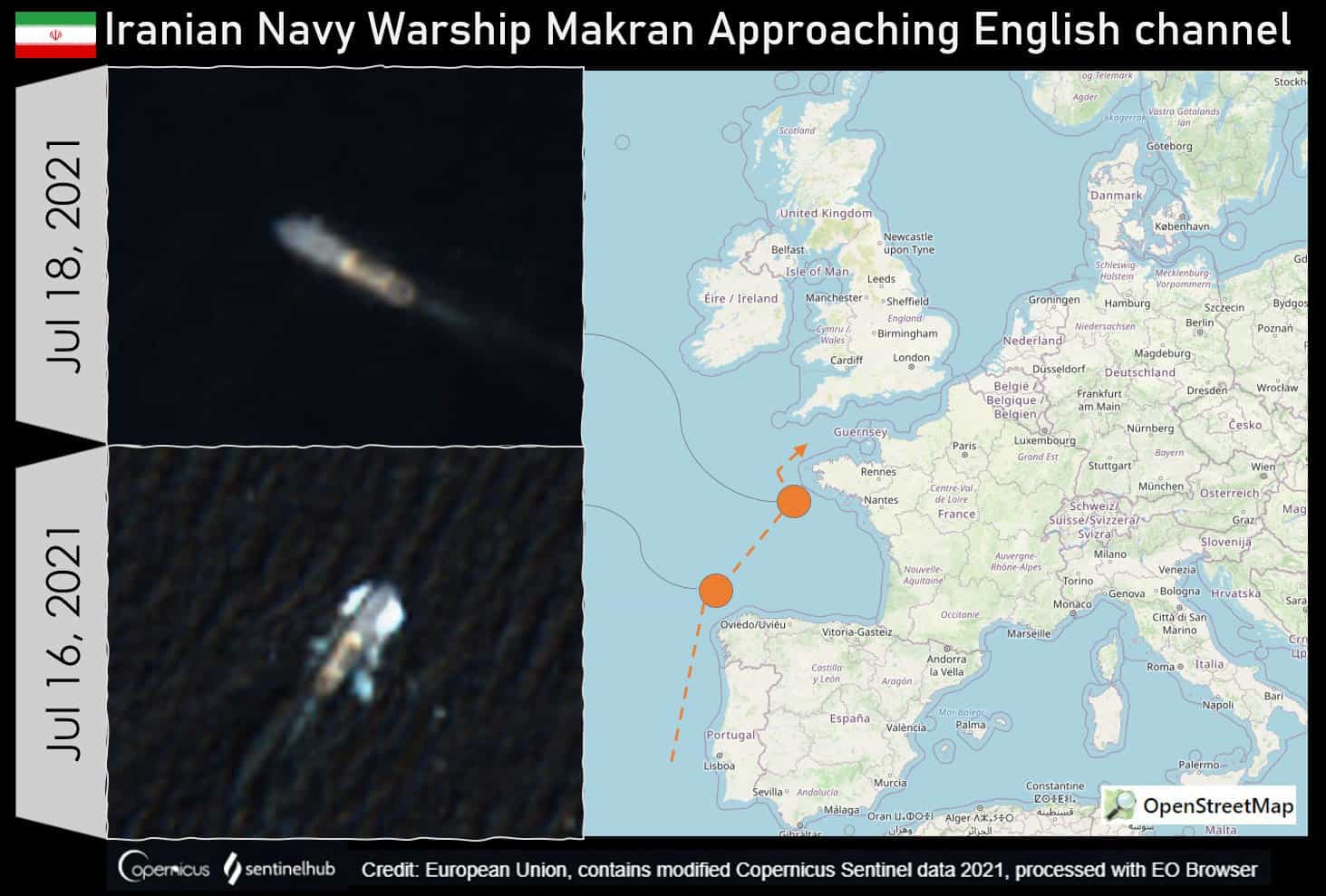 Two Iranian warships are nearing the English Channel, according to satellite photographs reviewed by USNI News. The ships are thought to be headed to the Baltic Sea to represent Iran in a July 25 naval parade off the coast of St. Petersburg to commemorate the 325th anniversary of the Russian Navy.

The pair, the frigate IRINS Sahand and former oil-tanker-turned warship IRINS Makran, sailed up the West coast of Africa and past Spain and France before approaching the southern coast of England. Leaving Iran in April with arms and likely refined fuel, the duo was first thought to be headed to Venezuela before lingering off the coast of Senegal and then heading toward the North Atlantic.

With a high degree of confidence, we believe we have a a visual confirmation of the Iranian tanker-turn-floating base navy vessel, the I.R.I.S.N. MAKRAN. Dimensions, deck and lack of AIS all indicate it. Clients have received the visual now via SMS & our website's Heads Up.

As the ships pass through the English Channel NATO is likely to closely monitor the warships. Until clear photos emerge the question remains if the converted tanker still has the fast boats it was transporting aboard or is riding low in the water, indicating it could be laden with refined gas or oil.

The vessel has preceded slowly with a light frigate, or what Iran calls a ‘destroyer’, as an escort. Based on sporadic Automated Identification System (AIS) transmissions tracked via MarineTraffic.com, the ships lingered for about a week off Dakar, Senegal. The AIS transmissions have been intermittent and ambiguous at times but open source intelligence experts have been able to keep a reasonable track on their real path. 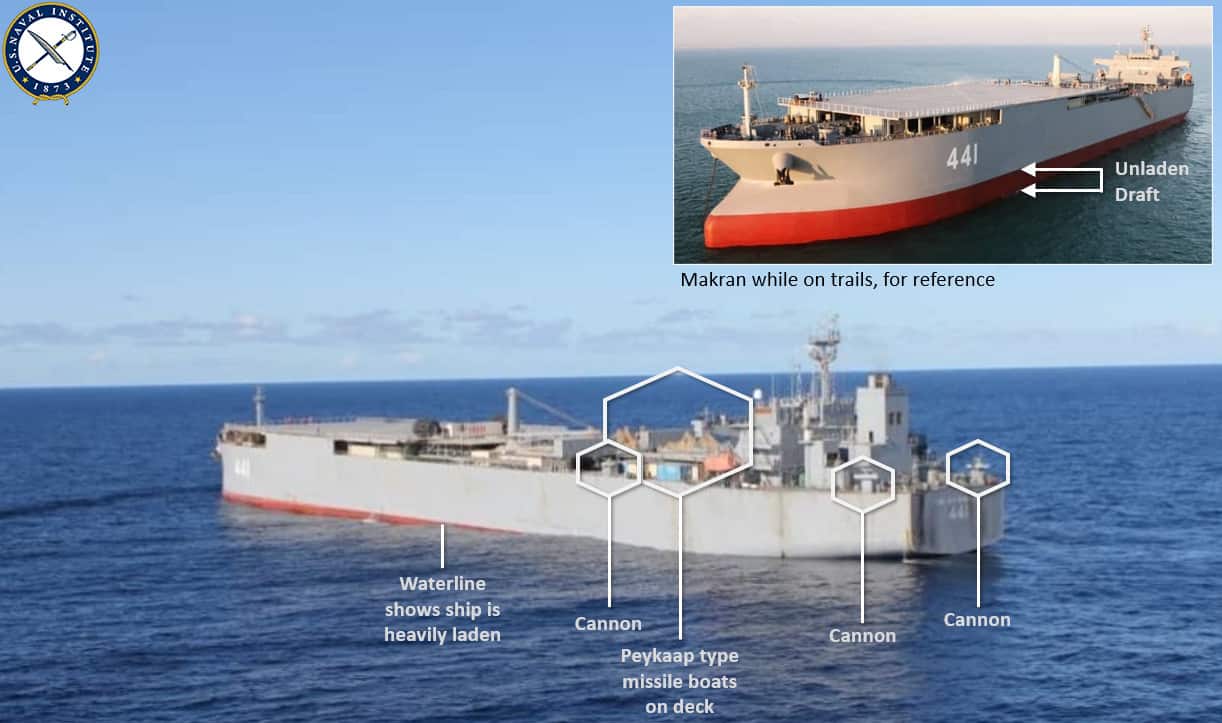 When Makran was first observed in November 2020, the ship was thought by western observers to be a forward base ship. This equated its role to that of the U.S. Navy’s Expeditionary Sea Base (ESB) ships, like the USS Hershel ‘Woody’ Williams (ESB-4). ESBs act as a floating base for operations and can carry or support a range of small boats and aircraft. Makran has exercised with launching unmanned air vehicles (UAVs) and mini submarines for special forces, implying an amphibious warfare role. Iran’s Islamic Revolutionary Guards Corp Navy has two forward base ships, although both are much smaller than Makran.

Makran is a unique warship that entered service with the Iranian Navy in January. Although exact definitions vary from navy to navy, there is a common notion of what destroyers, frigates, and cruisers are. And it is the same for naval auxiliaries such as oilers, submarine tenders and hospital ships. The status of the converted oil-tanker is still unclear. There is a natural suspicion that Iran may use Makran as a blockade runner, delivering fuel to sanctioned allies under the legal protections of a warship. While naval auxiliaries can support humanitarian efforts, the use of one to evade sanctions is a new test of international norms. [Actually, imposing unilateral blockades and sanctioning third parties is the “test” of international norms.] Although there have been occasions of surface combatants and submarines being used to transport high value cargoes, Makran is increasing its survivability by using international law.

The forward base ship label isn’t entirely wrong. Makran is equipped with a large helipad, but does not have hangars, and can deploy small boats or mini-subs from its deck. But when it sailed from Iran in May it appeared to be on a transport mission, delivering seven missile boats to a foreign country, according to reported U.S. claims of the ship’s destination and satellite photos of its cargo. And it was later determined by USNI News that she was likely fully loaded with oil or fuel. When it didn’t head to Venezuela, the next likely destination was thought to be Syria.

Iran has exported fuel to Venezuela and Syria despite [illegal, non-UN] international sanctions. However some shipments were interdicted by the U.S. In August 2020, four shipments were seized. Previously, in July 2019, tanker Grace 1 carrying Iranian oil destined for Syria was impounded in Gibraltar.

All of the tankers involved were merchant ships. But Makran is a naval auxiliary, which provides it with some protection under international law. As a naval auxiliary, it is classified as a warship and is therefore entitled to sovereign immunity. Under the United Nations Convention on the Law of the Sea, it is immune from the jurisdiction of any other state. So it, or its cargo, could not be seized in the same manner as the civilian vessels.

There is a trade-off, however. Being a naval auxiliary, in wartime it is not entitled to belligerent rights during armed conflict. This means that it cannot lawfully conduct attacks. So long-range anti-ship missiles, like those carried on another Iranian forward base ship, Shahid Roudaki, could not credibly be fitted. But Makran has none of these, only helicopters, short-range cannon, or six autocannon positions, and machine guns are fitted. And like U.S. naval auxiliaries, it can carry out the full range of naval support missions in peace or war.

If Makran ultimately delivers its cargo to Syria, or any other customer, then it may prove the case for this new category of warship. Yet only countries intended to flout international [unilateral and illegal blockades by the US and sometimes its vassals] sanctions or embargoes could pursue a similar concept.