DUBAI (Reuters) – Iran’s elite Revolutionary Guards have shot down a U.S. “spy” drone in the southern province of Hormozgan, which is on the Gulf, the Guards’ news website Sepah News said on Thursday.State news agency IRNA carried the same report, identifying the drone as an RQ-4 Global Hawk.

“It was shot down when it entered Iran’s airspace near the Kouhmobarak district in the south,” the Guards’ website added.

The U.S. says that the drone was a MQ-4C Triton, the Navy variant of the Global Hawk type that is specialized on Broad Area Maritime Surveillance (BAMS). It claims that the drone was in international airspace when Iran’s Revolutionary Guard shot it down. (Interestingly no MQ-4C was supposed to be in the Middle East. The deployment must have been secret.)

The incident is another piece of evidence that Trump’s “maximum pressure” campaign against Iran now works against him.

Trump allegedly told his staff to stop talking up war on Iran:

Trump does not want to open a military conflict with Iran. But he is already waging a brutal economic war against Iran and the country is pushing back. Trump wants negotiations with Iran without lifting sanctions against it. Iran rejects that.

It does no longer matter what Trump wants. Iran has achieved escalation dominance. It can cause a myriad of incidents that force Trump to react. He can either launch a hot war and thereby risk his reelection bid, or he can cut back on the sanctions that hurt the Iranian people. If he does not do either, more pinpricks will follow and will over time become more costly.

#Iran's #IRGC commander Salami: Shooting down the US drone had a clear & strong message i.e. we'll react strongly against any assault to the country. Borders are our red line. We are not after a war with any country, but we are ready for war. Message of today's incident was clear

The loss of the Global Hawk drone is significant. These huge birds with a wingspan larger than a Boeing 737 are considered strategic assets. They were built as replacements for the infamous U-2 spy planes. They carry highly classified sensors and cost more than $120 million a piece.

This loss can certainly be attributed to Iran. But to blame Iran for it the U.S. will have to prove that its drone did not enter Iranian air space.

U.S. drones have violated Iran’s sovereign airspace before. In 2011 Iran acquired a stealthy RQ-170 drone which had flown in from Afghanistan by manipulating its command signals. In 2012 Iran took down another U.S. drone, a Boeing Scan Eagle, that had flown in from the Persian Gulf.

How will Trump react to this incident? President John Bolton will demand military action against Iran as revenge for the shoot down. He will surely also press for sending more troops to the Middle East.

Trump may again play down the incident, like he recently did with the tanker attack which he called “very minor”. But the war hawks in the media and Congress, and Iran, will put more pressure on him. More incidents would surely follow.

Trump has a way out. He could issue sanction waivers to allow China, Japan, South Korea, India and others to again import Iranian oil. It would take the “maximum” out of his now failed “maximum pressure” campaign and could be a way to move towards negotiations.

The Washington crowd is disinterested in making distinctions. General Kenneth McKenzie at CENTCOM has been planning this operation while previously occupying the J-5 seat as Director of Plans.

Why the hesitation? Gold is set to hit $1,500 and beyond once this op starts. Oil may quickly ascend to $80 a barrel. Silver could easily take out $20 an ounce within a week of this war’s declaration.

True…but cowards love to send toys to a fight instead of real men.

They would prefer cannon fodder, as in ISIS or Al Qaeda. Winnow the horde down so target countries becomes more vulnerable to a future Zionist-Deep State takeover.

‘The U.S. says that the drone was a MQ-4C Triton, the Navy variant of the Global Hawk type that is specialized on Broad Area Maritime Surveillance (BAMS). It claims that the drone was in international airspace when Iran’s Revolutionary Guard shot it down.’

Can anyone provide, a transcript of the USA telling the truth, about anything, ever?

McNamara’s doctors must have heard a few horror stories.

Marine General Smedley something or other, did state what his military career meant as a hired hand of US corporations, back in the 19th century.

Other than that, I go along with you.
The Native Americans described them best, as forked tongues.

No wars the USA ever fought can be justified.

Only two wars in European American History, can be justified.

The British American Colonies revolt against the British Empire, for freedom, and the Confederates side of the war of criminal aggression by the USA against the foreign to the USA, sovereign Confederate States of America.

Of the two, the only one the USA was in involved with was the Holocaust of the Southern people, 1861-1865, and the USA was the war criminal aggressor and invader.

The united States , under the Articles of Confederation, is not the same thing as the UNITED STATES OF AMERICA, which is a foreign corporation, incorporated under the British Empire law, and did not exist, at or during the time of the American Revolution for Freedom, against the British Empire.

THE USA was formed later, by Usury bankers, political prostitutes, elites, with the forcing of the “Constitution” on the American people, making them slaves to the USA.

The descendant of slave holding barbarians complaining about slavery. How cute. Face it. Your southern ancestors where that incapable that the only thing they managed to create was an economy based on slave labor.

You poor, dumb, ignorant sheep regurgitating the lies of the War criminal USA. 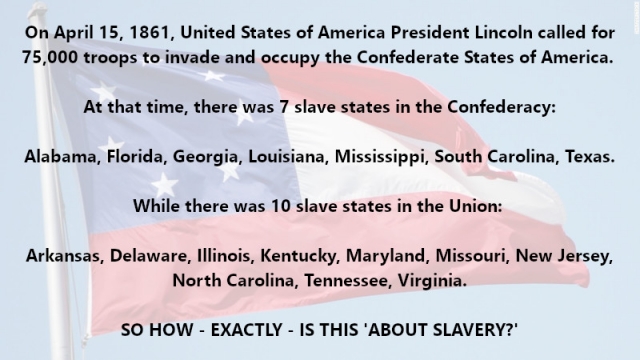 That does not change one little bit that you are the descendant of slave holding barbarians who could not get an economy running without the free ticket of slave labour, does it ?

Of course it does.
You showed you ignorance by trying to paint the South as SLAVERS, while ignoring the SLAVERS in the North, USA SLAVERS.

As a matter of fact, the vast majority of slave ship owners and operators, were New York Non Semitic Russian Expat & Spawn, Khazarians.
They distilled rum, traded it to African war lords, for slaves.
The slaves still alive when they hit port, was sold into slavery so the Khazatrians could get all that gold for the misery of the Africans.

These Khazarians also sold rum to the Indians, which was a real bad idea, and against the law, because it led to Indians going on the warpath.
Amazing what one can learn when they extract their head out of their rear trap door.
You should try it sometime. 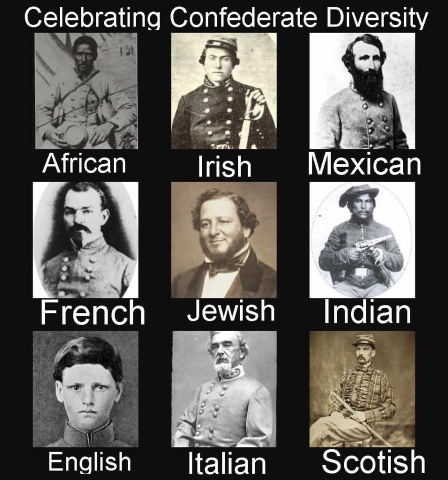 Nice picture of a bunch of losers.

You know, Johnnyboy, an example what scum your ilk are. Your post on slave holding states misses the fact that the entire confederacy was a barbarian slave holding cesspool. Gaolbirds.

You keep saying things which I prove are BS.

Your answer is, That don’t change anything.

Your being massively ignorant,, or massively dishonest, (only two reasons you could be that wrong about everything), changes nothing?

Because you are unable to comprehend the truth, even when I draw you pictures?

So far you have proven that the entire confederacy was a slave holder country. Barbarians. How about paying all those back held wages and damages to the descendants of these who where forced to work for you ? Including interest and interest on interest ? The German reparation after the holocaust would be a children’s affair compared to that. 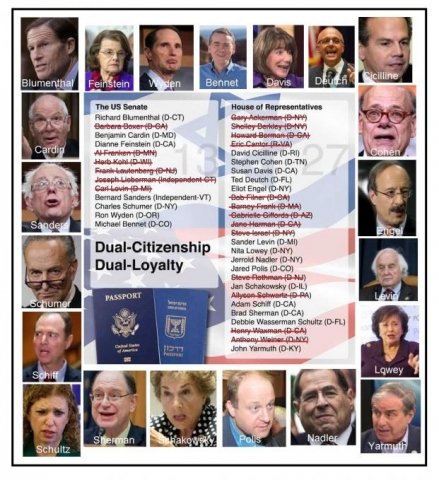 How did Berney get in that shot?

Gee John, covered this before. There was nothing noble about the Confederacy.

But the honors given the North is based upon Christian values? I don’t think so. The war, from my studying, was about Federalizing the States, not about slavery. The Southern Christians did not want slavery, it was forced upon them by those Ashkenazi’s Jews who then lobbied Congress to accept slavery as an industry.

Look and learn something you muppet.

Smedley Butler joined the US Marine Corps in 1898, and fought in the Philippines while underage.

He wrote his book in 1935, after his career was well over you muppet.

So Smedley Butler was indeed fighting for the USMC at the behest of US corporations since the 19th Century.

And Adolf Hitler is still a rent boy you nazi git. Stay over with Russia Insider with all the other crazy Hitler lovers.

In 1898 Smedley Butler was an underage recruit – he wasn’t publicly saying anything his superiors didn’t want him to say. Even at that age he was a professional soldier first and foremost.

As a retired Major General, Butler went public in the 1930’s after he was approached by treasonous forces within the government and the business community. He was asked by them to lead a coup d’etat against the US government. He refused, exposed the guilty parties and ultimately wrote, “War is a Racket” which shook Washington to its core.

Smedley Butler fought through the 19th Century, when he served as an underage soldier in the Philippines in 1898.

You desert people are so slow.

I believe the US won’t attack Iran yet..they need more dogs in the fight..US rarely attacks alone..so far the UK has joined in on the War Rant..but the rest of NATO are not ready to join in yet.

Only Jeremy Cunt said he believed the US, and he is fighting to be the next, unelected, PM of Britain.

Good analyses, the dopey Yanks have backed themselves into a corner.

They either attack Iran, which will lead to a huge war involving nuclear armed terrorists in Israel, or go home.

S hit or bust for Bolt-on and Fat Mike.