MOSCOW – True happiness is spending a summer in Moravia doing absolutely nothing. You wake up around ten or eleven and eat small, freshly-baked rolls with cheese for breakfast as you sip on a low-alcohol beer, maybe a Bernard – something easy on the stomach. Then it’s off to the pub. You will be there until the early afternoon, tending to two or three mugs of Polička as you read, talk to friends and pet their dogs. Then it’s time for lunch. There’s a quiet spot around the corner where you can sit outside and eat your fill of beef and Czech dumplings. The waiter, in a crisp white shirt and leather apron, brings you generous pours of Pilsner Urquell. It goes down like water and it costs about the same.

By evening you’re under a canopy in the center of a small, cobblestone square in Brno, nursing an absinthe with ice as you struggle to piece together why you bought a beautiful but extremely overpriced leather-bound anthology of Tomáš Masaryk’s letters at a dusty Antikvariát you stumbled upon while trying to locate a public restroom. (As usual, you ended up peeing in a bush.) You lock eyes with the devious, enchanting young lady sitting next to you and raise your glass. The rest of the night is a magnificent blur.

The Czech Republic – or Czechia, they re-branded several years ago – used to be one of the most advanced civilizations on earth. A nation which once prided itself on Doing Nothing (practically the official state religion) has found itself asphyxiated by terror as Czechs hide in their apartments and only venture outdoors to buy groceries – clad in government-mandated face masks. It used to be that the Czechs did nothing as a matter of principle. But now it is against the law to do anything, which obviously defeats the whole point of passive-aggressive resistance. This has greatly annoyed the last handful of thinking people in this once great country.

Their national literary hero, Jaroslav Hašek, is said to have created a satirical political organization called The Party For Moderate Reform Within The Bounds Of The Law. It seems he vastly underestimated what his dispassionate countrymen would be willing to sign up for. Wearing a face mask at all times or paying a 10,000 koruna ($390) fine, for example.

Our sources in Prague and Brno inform us that the Czech authorities are cracking down on what used to be considered benign behavior.

“There was a guy who had dirty underwear, went to a shop, changed his underpants and they caught him,” an intelligence source in the Czech capital told us. “I bet he now wishes he just turned his underwear upside down with the brown spot and continued on his way.” Stealing food or goods from shops can now result in years of prison, we’re told. The country is in crisis mode. Not a single pair of clean underwear to spare.

Prague is a ghost town “without ghost-busters,” our source observed.

The situation across the country is this: Everything is closed, except grocery stores and essential businesses and institutions. Pensioners are only allowed to visit shops between 6 and 10 in the morning – for their own safety, of course. We have it on good authority that it’s still possible to sneak into certain pubs, at certain hours, if you know the right people. It pays to be well-connected.

There is an emergency decree which forbids Czechs from going outside without protective face masks. Instead of mass rebellion, Jan Hus-style, Czechs are creating their own trendy protective gear to satisfy the government’s wishes. It’s even become a weird sexy-fashion thing. These DIY medical garments, drenched in mucus and slave-mentality, are now almost certainly vectors of disease in their own right – but that’s neither here nor there.

The demand for face masks has already led to national scandal. State security forces carried out a brave raid on a factory in Lovosice, northern Bohemia, confiscating 28,000 medical garments. The government claimed they had busted an illegal price-gouging scheme, but follow-up reports suggest that the protective equipment may have been a donation destined for Italy. We’ve been told that the Czech authorities kept the masks for themselves, as a sign of European solidarity.

On television, Prime Minister Andrej Babiš wears a face mask as he addresses his captive audience. Our snitch in Brno, “Eva”, pointed out to us that it’s physically impossible to contract coronavirus from watching television. She’s hiding behind a fake name, but eventually she’ll be identified and punished for endangering the well being of the COVID Protectorate.

Locked away in their homes, far from their pubs, Czechs have been forced to retreat into their minds. Cheeky Facebook events now advertise nonsensical extra-curricular activities, such as dolphin watching in Brno. (The Czech Republic is landlocked – sorry, we have to point this out for our American readers.) Thousands of people reportedly sign up for these festivities, which pass without incident, or dolphins. Perhaps there is still hope for the Czechs.

Our source in Brno depends on grants from Brussels for her livelihood, but even she admits that there’s simply no going back at this point. It’s a Brave New Europe. Open borders are a thing of the past. European unity is a sick joke.

But there’s a silver lining to the lockdown, Eva tells us.

“You know, most people are at home now, finally spending time with their families…I think many people will get divorced after this.”

One important Czech official has warned that borders will have to remain closed for two years to ensure that the virus doesn’t kill everybody. The Czechs have already suffered an unconscionable six deaths from coronavirus. And the bodies continue to pile up.

An American bastard slandering my country! A goy who knows shit about Czechia!

With a name like Slavsquat, I seriously doubt he is an American, maybe a Pole, who knows, Czechia is a made up “country” just like Israel…. 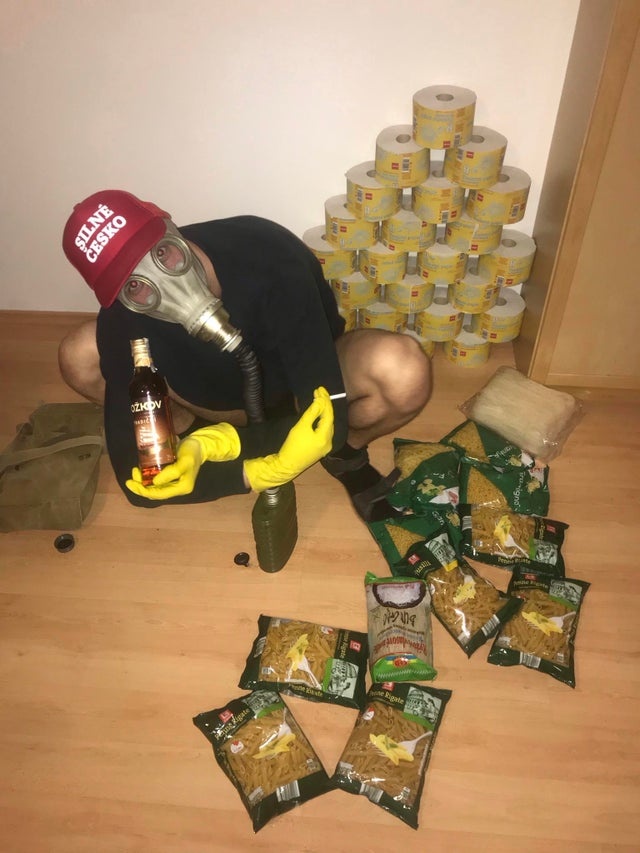 And Slavsquat is a made up name just like Jihadi Colin. It’s obviously from the “squatting Slavs in tracksuits” memes that were popular a couple of years ago.

I am saddened about the recent transformation of Anti_Empire from being a ME conflict insider to 24/7 all covid all the time….

Slavsquat is Western mongrel temporarily staying in Moscow, slandering the Czechs, from afar, and from literature rather than personal experience… Perhaps,he aspires for CIA ” secret” agent…

He is not slandering the Czechs, but their government!

if you’re drunk all the time the way the author describes in par 1 and 2, you’re already in lockdown. lol