Earlier in the day we reported that Indian Army officials said that three troops – an officer and two soldiers, to be more precise – had been gunned down by Chinese forces during a “violent faceoff” in Galwan Valley in the Ladakh region Monday night.

In an official follow-up statement, the Indian Army now says as of Tuesday evening local time that an additional seventeen soldiers were critically injured in the exchange of fire, and since succumbed to their wounds after being “exposed to sub-zero temperatures in the high altitude terrain.” This brings the official Indian death toll to 20 soldiers killed.

With the whole incident still shrouded in contradictory claims and lack of confirmation on potential Chinese casualties from Beijing – even after widespread unverified Indian media reports claimed that up to 43 Chinese People’s Liberation Army (PLA) were killed or injured in the clashes, one thing is for sure — that this is the biggest and deadliest border clash between the nuclear-armed neighbors in a half-century.

The only thing approaching an ‘official’ statement from Beijing appears to come via state media. The highly visible editor of state-run Global Times Hu Xijin, who’s often served as unofficial mouthpiece conveying Beijing official sentiment to the West tweeted the following in the aftermath Tuesday, calling it “goodwill from Beijing”:

Chinese side didn’t release number of PLA casualties in clash with Indian soldiers. My understanding is the Chinese side doesn’t want people of the two countries to compare the casualties number so to avoid stoking public mood. This is goodwill from Beijing.

Importantly, Xijin confirmed that there were indeed casualties on the Chinese side.

He stated further: “Based on what I know, Chinese side also suffered casualties in the Galwan Valley physical clash,” in a follow-up tweet.

“I want to tell the Indian side, don’t be arrogant and misread China’s restraint as being weak. China doesn’t want to have a clash with India, but we don’t fear it,” the GT editor added.

17 injured Indian soldiers reportedly died due to lack of in-time rescue, which reflects the serious flaws of Indian army to provide emergency treatment to the wounded. This is not an army with real modern combat capabilities at plateau. Indian public opinion needs to stay sober.

And BBC reports of the new statements:

It added that “17 Indian troops who were critically injured in the line of duty” and died from their injuries, taking the “total that were killed in action to 20”.

China did not confirm any casualties, but accused India in turn of crossing the border onto the Chinese side.

India blamed Beijing for “an attempt by the Chinese side to unilaterally change the status quo” on the border, according to Indian media.

With tensions this high, and no doubt the national medias of each country about to spend days whipping their citizens into a frenzy, there’s likely more to come along the restive and disputed Line of Control (LOC).

We should add that strangely, the Indian army is still claiming as of Tuesday that “no shots were fired” in this latest major clash.

This is of course a not so insignificant detail which has left many observers scratching their heads, but then again, border skirmishes between the two have been known to involve stones, sticks, and fist-fights. Given the high casualty count, gunfire is most likely, or perhaps they fought with bayonets?

A disturbing development. I wonder why India chooses to be America’s lapdog to antagonize China. Last time these two giants met India was almost beaten to death.

while China and India are improving conditions for their populations, in the USA poverty is increasing; hopefully this dispute will soon be resolved

The poverty levels in India have been increasing for thirty years, and people now have lower nutritional levels than they did ten years ago. 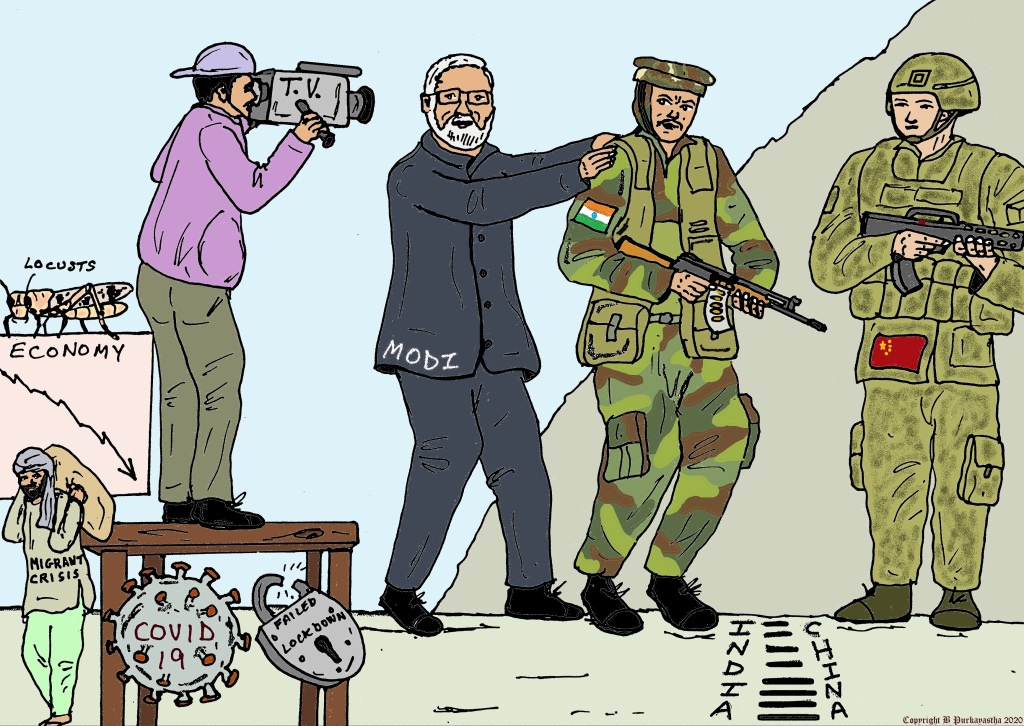 There is an important clue proving india is lying in this article: India claims there was no exchange of fire but that the soldiers were “martyred” (India has taken to aping the Pakistani habit of calling killed troops “martyrs”) by Chinese attacking with “wired clubs and stones”. This is automatically proof that you can’t believe the Indian army account because either the poor unarmed Indian troops “killed” 43 Chinese soldiers with their bare hands or else the Indian army is lying about the number of Chinese soldiers “killed”, or both. Having had personal experience of the Indian armed forces I can absolutely guarantee you that anything they say can be almost axiomatically taken to be a lie.

It is, to me, obvious that the Narendrabhai Damodardasbhai Modi regime, desperate as it is to distract attention from its appalling mismanagement of the economy and the Coronavirus lockdown, apart from other crises, provoked the confrontation in the hope of being able to “prove” that it had “beaten the Chinese”. This is a repeat of the Nehru regime behaviour in 1961-62 which led to a war in which India got its head handed to it on a platter. This time, there won’t be any full scale war because the Indian army is too weak to take on the Chinese alone and Amerikastan, the regime’s planned saviour, is not going to commit suicide for the greater glory of Narendrabhai Damodardasbhai Modi.

I wish the BBC would do us all a favour and just f n DIE.

Pakistan and India exchanging blows… I can see.
‘British’ India and RCC (Jesuit) China… WTF! Yes, even with their history.
Something stinks, and its not the Ganges…