In Iraq, US Allies Wipe the Floor With US Allies

Let it never be said that national interest will ever get in the way of personal ambition. Take the example of Iraqi Kurdistan. Facing sagging popularity in the face of an oil bust, corruption, and his authoritarian ways, the Kurdish leader Masoud Barzani did what any self-respecting politician would. He plunged his polity into an unnecessary, unwinnable and useless standoff against all of its neighbors just to raise his nationalist credentials up a notch.

Since the 2014 collapse in oil prices times have been hard for Kurdistan. A reality even new territorial acquisitions, made when the Iraqi army melted away from northern Iraq before ISIS, could not pepper over.

However, everyone in the Middle East already knows that given the option the Kurds would take independence in a heartbeat. As such Barzani’s referendum was less than symbolic, it was pointless.

It could do nothing for Kurdistan except perhaps to unite all of its neighbors (all of whom are home to restive Kurdish minorities) against it, in a standoff the Kurdish Regional Government could not possibly win. The only possible benefit would be for Barzani who would get to posture as Mr. Independence and prop up his position as the premier Iraqi Kurdish leader.

This is exactly what happened as for a time Barzani’s powerful political rivals were outmaneuvered. They could not possibly come out against the referendum even as they understood Barzani would get the lion’s share of the credit.

However, unite all its neighbors against it is exactly what the referendum did. Worse yet for Kurdistan, when Iraq, Iran and Turkey turned up the heat Barzani’s powerful Kurdish political rivals decided they would rather not bleed to entrench Barzani’s dominant position over them.

When the Iraqi army and militias launched a military drive against the city of Kirkuk, Kurdish forces loyal to the rival Talabani political clan abandoned the battlefield in advance, leaving Barzani’s in an exposed position where they had to hurriedly retreat after leaving dozens of dead behind as well.

As a result the Kurds lost control of the the ethnically-mixed city of Kirkuk and rich oil fields around it they had controlled since 2014 and coveted since at least 2003. In the following days they lost even more ground, either without a fight or after brief clashes, thus relinquishing most of the gains they had made in 2014.

Suddenly the shrinking and divided Iraqi Kurdistan looks far less powerful than just a month ago. The loss of territory, morale and prestige it suffered is only exceeded by the breakneck pace at which it happened. All thanks to the fecklessness, backstabbing and treachery of its leaders.

The US has backed and propped up Iraqi Kurds since 1990 simply because they were the natural ally against Baghdad. However, it never gave political backing to their project of independence. In the current standoff it spoke out against the Kurdish referendum and broadly supported the Iraqi government who military it likewise subsidizes.

However it seems the US did not expect the disastrous collapse of the Kurds either, and has been taken aback since the events unfolded without its influence, but with the strong input of Iran. Aside from the Iranian-backed militias playing a prominent role in the offensive, Iran also reputedly brokered the deal where Barzani’s Kurdish rivals abandoned Barzani on the battlefield perhaps in exchange for a governorship position in Kirkuk under the central government.

Thus despite the side it publicly rallied behind winning, the US can not but also be sour that by now traditionally pro-American Kurds were defeated by the Shia-dominated Baghdad that US backs more out of concern it would otherwise had to admit it lost the 2003-2011 Iraq war leaving the country to an Iran-friendly government (and incapable to defending itself against ISIS) than any other reason.

By now it’s too late however. The Kurdish strength is much less than just a month ago, and furthermore they’re all again convinced that in the end the US will always abandon them to their enemies. 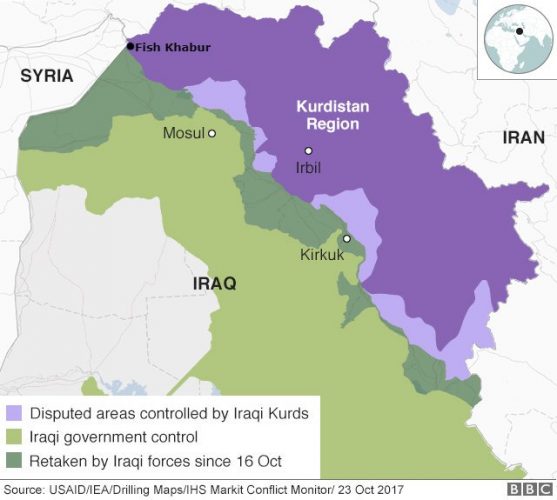