If Russia cuts off its gas deliveries to Europe then the most exposed countries could see their economies contract by up to 6%, the International Monetary Fund (IMF) said in its blog on July 19.

“Our work shows that in some of the most-affected countries in Central and Eastern Europe – Hungary, the Slovak Republic and the Czech Republic – there is a risk of shortages of as much as 40% of gas consumption and of gross domestic product (GDP) shrinking by up to 6%,” IMF economists Mark Flanagan, Alfred Kammer, Andrea Pescatori and Martin Stuermer said in the Fund’s regular blog.

The IMF went on to say that the impact of an increasingly anticipated Russian gas embargo could be mitigated, however, if governments act quickly to secure alternative supplies and energy sources, ease infrastructure bottlenecks, encourage energy saving and expand solidarity agreements to share gas across countries.

The Russian-owned gas behemoth reduced flows of gas to Europe by 60% in mid-June, stoking fears that Europe would not be able to pump enough gas into its storage tanks ahead of the start of the heating season. At the beginning of this year the EU called for those tanks to be 80% full by November 1, and they were 64.4% full as of June 19.

It is still not clear if Europe will hit the EU’s target as the key Nord Stream 1 pipeline was taken out of action for 10 days of annual maintenance on July 11, but it seems unlikely gas flows will resume at the end of this week.

Gazprom has demanded documents from Canada that would allow a key compressor unit to be returned to the pipeline after repairs and this week it declared force majeure on July 19 that gives the Russian energy company a legal pretext to ignore its contractual obligations to send more gas to Europe.

While Nord Stream 1 is the main pipeline from Russia’s Yamal gas fields to Europe, it only carries 55bn cubic metres of gas a year, about a third of the 155 bcm that Russia sold to Europe in 2021. The other pipelines through Ukraine and Turkey could still deliver gas to Europe even if flows via Nord Stream 1 stop.

The IMF economists explored the possibility of what a reduction of gas by 70% would do to European economies and concluded even at that level there is some wiggle room.

“Our work suggests that a reduction of up to 70% in Russian gas could be managed in the short term by accessing alternative supplies and energy sources and given reduced demand from previously high prices,” the IMF said, but added that a total shut-off of gas would cause major problems.

“Diversification would be much harder in a total shut-off. Bottlenecks could reduce the ability to reroute gas within Europe because of insufficient import capacity or transmission constraints. These factors could lead to shortages of 15% to 40% of annual consumption in some countries in Central and Eastern Europe,” the IMF said.

Just how bad things will get depends on how the energy market and transport systems in Europe react, and dependence on Russian gas varies widely from market to market.

The impact on economies varies greatly amongst the markets. In the worst-case scenario, using the fragmented market approach the most exposed counties in Central Europe of Hungary, Slovakia, Czechia and Italy (chart) would all see their economies shrink by around 6%, although in the integrated market scenario the contraction is a smaller 2%-3%. (chart) 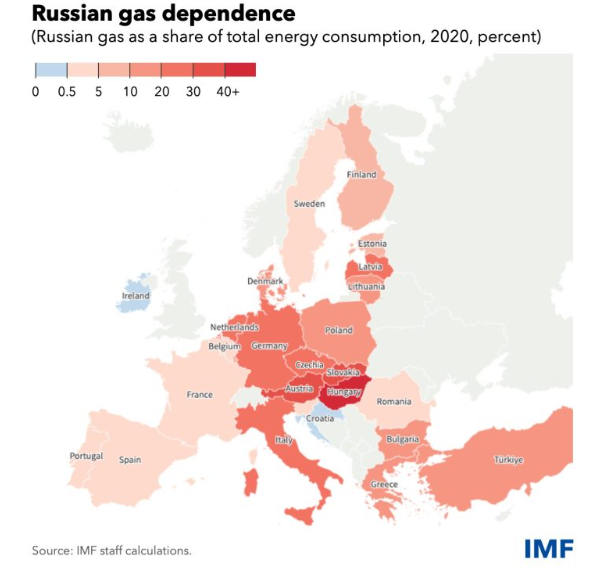 Germany has already sounded the alarm and gone to energy “alert” status, the second of the EU’s three-tier warning system, but it is much less exposed and would see its economy contract by between 2% and 3% in the fragmented market scenario, in keeping with earlier estimates, and only around 1% in the integrated scenario. [That’s not exactly “only.”] Nevertheless, Germany has been one of the most actively preparing for a possible cut-off that German Vice-Chancellor Robert Habeck, who is in charge of energy, has said is an “attack” on the EU by Russia.

“The effects on Austria and Germany would be less severe but still significant, depending on the availability of alternative sources and the ability to lower household gas consumption. Economic impacts would be moderate, possibly under 1%, for other countries with sufficient access to international LNG markets,” the IMF said. 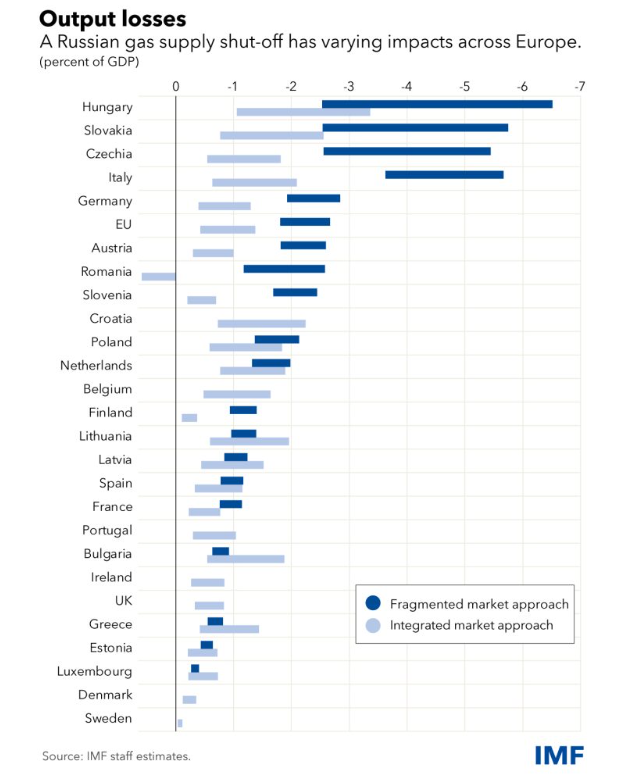 While Germany would probably manage to get through the winter with some belt tightening and might need to resort to some rationing of gas, the IMF said that the worst of the effects on the German economy might not make themselves felt until next year, if Russia were to shut off the gas completely this autumn. However, the availability of alternative sources – more renewable energy capacity and the completion of new LNG terminals on the German coast – mean the pressure would fade as 2023 wears on.

Germany and Italy, fearing the worst, have both already launched public awareness campaigns calling on their citizens to use energy sparingly. Italy has introduced mandatory minimum and maximum heating and cooling levels. REPowerEU, the European Commission’s plan, also contains measures to conserve energy and reduce dependence on Russian fuels.