Familiarize yourself with the costs of what you asked for

This is your doing:

Who is responsible for these deaths ?#coronavirus #Corona pic.twitter.com/YdaFAJjecS

Even if you believe lockdown saved some people there are others which it sentenced to death as it was clear from the start that it would.

It was you who decided to play God and that it was necessary to kill some people to try and save others.

If you’re going to play Madeline Albright here and tell me the price was worth it that’s fine, but don’t try to hide away from the “costs”. Know them, and own them.

The clip is from a station in Muzaffarpur in Bihar, where the 23-year-old woman had arrived in a special train for migrants on Monday.

At the same station, a two-year-old child also died, reportedly from heat on top of inadequate food. The child’s family had boarded a different train from Delhi on Sunday.

The woman, according to her family, had been unwell on the train because of the lack of food and water. She had taken a train from Ahmedabad, Gujarat on Saturday. On Monday, shortly before the train rolled into Muzaffarpur, she collapsed.

After her body was laid out on the station platform, her little son kept playing and trying to wake her until an older child dragged him away.

This is India. This happens every single day. 5 thousand Indian children die each day from starvation and malnutrition and no one cares. I have commented on the epic misery of India and no one cares. The only reason this tragedy is used is to show how wrong the shutdown is, not to really point to the horror that New Delhi does to India. That no one cares about. So use this video as some example to attack the shutdown laws around the world but that is about it. This is India.

do not worry they will invade US Europe Canada. there are so many in the US I cant believe there are any left in india

I think there is a grand total of 3 million Americans of Indian origin. That is less than 1% pf India’s 1 billion 350 million. But the good news is that Trump and England are willing to open up immigration for the people of Hong Kong, giving millions immediate refugee status to come here. Like Indians they speak English and are not Christian. So in the end Trump’s economic war with China is going to bring an ocean of them to America.

what about the snake charming pakis that are here

they are all lumped under that 3 million, unless some census counts Muslims as a separate category but 3 million bringing in islam, Hinduism, Sikhism and even Buddhism has a bigger impact on America than 30 million English Protestants

of course it impacts America in a negative way. these street shit ters are total alien to the US in fact martians would fit in better. I say there are at least 15 million here forget 3 million. there are 3 million in NY and NJ maybe 5 million I don’t care what the lying census says

Well chuckles get ready for an Asian Tsunami courtesy of Orange Head.

Shaming the ignorant masked Pod people is impossible. They only know what CNN, NBC, ABC MSNBC tell them through their TeeVee and Iphone but this picture won’t be on those channels. Good try though.

As shown in this article, Americans are being prepared for forced vaccinations for the SARS-CoV-2 virus:

With the low uptake on seasonal influenza vaccines, it will be interesting to see the measures that governments will use to force people to get vaccinated.

Haydon said he was slightly nervous before the second dose. He knew that second doses were given to increase the immune system’s response, and wondered if he might have more side effects. His arm became sore much more quickly this time. He got home from the clinic at about noon. At around 10 p.m., he started to get chills. He’s normally too hot at night, but he bundled up in sweats. His fingertips felt cold. He fell asleep, but woke up a few hours later with a raging fever.

The clinic where he was vaccinated had given him a 24-hour phone number to call, but he’d been reticent. His girlfriend, with whom he lives, called. They said to go to urgent care. It was a 10-minute drive. They arrived at 5 a.m.

The doctors met him in what looked like space suits. Even though he’d had a vaccine, he was also a potential Covid patient. They took him into an exam room, took a lot of blood, and gave him a nasal swab. He asked them to avoid his left arm, where he’d gotten the vaccine, but they ended up taking blood from both of his arms. His fever had already fallen to 99.8 degrees. They gave him Tylenol. The physician taking care of him offered to try to get him admitted to a neighboring hospital, but he decided to head home.

He and his girlfriend arrived home at 7 a.m., and he slept until noon. His temperature was 101.5. He got up to go to the bathroom, and became so nauseous he threw up. On his way back from the bathroom, he fainted. His girlfriend caught him and kept his head from hitting the floor.

I had to correct the cover! 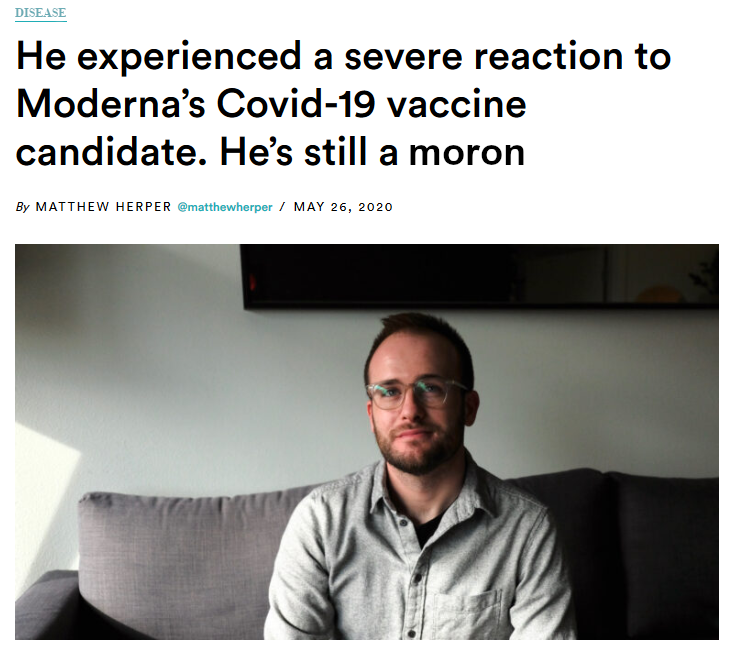