I Won’t Take the Vaccine Because It Makes Liberals Mad

"My newly formed and well-developed opinion on vaccines is this: if those bastards want me to get the jab, I’m not going to do it, because it annoys them"

I will never allow myself to be injected with Big Pharma’s mass-produced mystery juice, in part because it was rushed out of the lab and into the manufacturing line like a replacement for a Honda Civic’s recalled airbags.

It just wouldn’t be prudent.

As a healthy 29-year-old, my likelihood of dying from the virus is practically nil, so why risk the blood clots? And before anyone accuses me of trying to murder granny, shouldn’t she be immune to the virus if she gets the vaccine? Whether that’s actually true seems to be the topic of some debate. We’ll have to follow The Science™, then parse through its legitimacy relative to its political value for Democrats (that’s a new step in the scientific method) before we can know for sure.

If it turns out that the vaccine doesn’t prevent infection, then there’s no point in getting it in the first place, and I suppose we’ll have to sew our masks to our faces for the rest of our natural lives.

But in truth, I’m not really avoiding the vaccine due to potential medical complications, or because of the speed with which it was produced.

Personal liberty is not the reason I’m avoiding it, either. I’m not a member of the “don’t tread on me” club. Though I don’t think mandated “vaccine passports” are a brilliant idea, my refusal to take the vaccine is not related to some perceived or real government overreach. I’m not here to take a principled stand against the federal or state governments on this issue. In fact, I’m saving my principled stands against the federal or state governments for issues that really matter, like strengthening libel laws so that lying journalists can finally be shipped off to Guantanamo Bay where they belong.

My primary reason for refusing the vaccine is much simpler: I dislike the people who want me to take it, and it makes them mad when they hear about my refusal. That, in turn, makes me happy.

Maybe it’s petty, but the thought of the worst people on planet earth, those whom I like to call the Branch Covidians, literally shaking as I stroll into Target vaccine-free, makes me smile.

Allow me to emphasize my point.

Before this pandemic, I had a grand total of zero opinions on the issue of vaccines. I’ve never met an “anti-vaxxer” in my entire life, despite working in conservative politics, where, from my understanding, they can generally be found. Frankly, I don’t know a thing about their movement. I thought vaccines were what kids took periodically to eliminate the risk of ancient diseases like the mumps, which can only be found today in the illegal aliens we’re importing, and what people of a certain age took during autumn to avoid contracting the flu.

In fact, before the COVID-19 craze swept this nation, I devoted more attention to the liberal cause of preserving the Sea Turtle population than I did to thinking about vaccines. I like nature. (Tangentially related, an estimated 1.56 billion plastic masks ended up in the ocean in 2020 alone. Good work, liberals!)

It wasn’t until the sociopathic mediocrity that is the entrenched liberal political class in Washington began bullying normal people into wearing masks, staying home, standing six feet apart from others at all times, mobilizing even less impressive liberal stormtroopers to play the role of COVID-19 prevention Gestapo, and then finally propped up the vaccine as the Holy Grail that would lead us back to “normalcy,” that I finally began to have an opinion on vaccines. And though I don’t know much about the “anti-vaxxers,” I do know that I’m displeased with the way they have been portrayed by the aforementioned GITMO-bound media, simply for harboring opinions that are considered non-mainstream.

So I have decided that because the vile political Left, which I despise in the abstract, wants me to take their coveted vaccine, I simply will not. After the horrifying displeasure of meeting several of their militant COVID-19 restriction enforcers in person over the past year, I have become even more steadfast in my stance.

My newly formed and well-developed opinion on vaccines is this: if those bastards want me to get the jab, I’m not going to do it, because it annoys them.

Perhaps you think I’m being obtuse. I do not care.

I’ve seen too many videos of screaming ninnies losing their minds on people who didn’t buy into the mask hype. It is impossible to convince me that I am somehow abnormal for refusing the vaccine, and that the ranting pro-mask schizoids in the supermarket are the normal ones.

I also don’t care whether you decide to get the vaccine. It’s really none of my business.

Perhaps you’re not as committed to upsetting the enemy as I am. That is fine.

Perhaps you just want to go on a cruise vacation again. If so, call Bill Kristol or Jonah Goldberg and have your vaccine identification card ready. Godspeed.

(1) The SARS-COV-2 Virus hasn’t as of yet ever been isolated, purified, nor confirmed by Koch’s Postulates which essentially means that it doesn’t exist at all. And therefore by extension it also means that the COVID-19 Disease doesn’t exist either as you can’t have one without the other.

(4) All COVID-19 Vaccines once injected into the human body will ultimately lead to death whether or not it’s an instantaneous or delayed death make no mistake about it people “ALL COVID-19 VACCINES = IMMEDIATE OR DELAYED DEATHS” PLEASE: EDUCATE BEFORE YOU VACCINATE!

Whether you take the vaccine or not is your choice, and I respect it. Heck, even I am putting off taking it myself because the safety and effectiveness of the Western vaccines are in doubt, and so is the availability of Russian-made Sputnik V (I live in the US).

Personally if I were to make a particular decision, my main priority is its inherent merits and/or drawbacks, not the potentially negative reaction of any significant ‘other’ who I’m at odds with. If I do not want to feed a troll, then I would might as well not troll at all.

Hey, Joey, If a decision that results in horrible reactions or premature death as these (non-vaccines) mRNA injections seem to actualize and it is because the victims were deceived by the promoters propaganda I can’t say I respect their gullibility or yours. Do any of us non elites know what the formulas really are? Maybe that is why Bill Gates refuses to divulge the formulas. We know that Gates et al have an agenda to radically cull the population of the whole world focusing on what the elites consider the “useless class”. I suspect that the Hollywood and political celebrities who are promoting these injections are actually taking placebos so they won’t be harvested when they throw the MRNA kill switch this fall.
Do you or any non white-coat bureaucrat actually know the formula of the Sputnik V? Are you trusting it simply because it was supposedly concocted in Russia? How can it be of use for a “virus” that is just a myth created to effect top down control of gullible populations?

“If it turns out that the vaccine doesn’t prevent infection…”

huh? So now we have redefined disease?

And how about this jewel: Simply put, we don’t know if these vaccines prevent infection, but we do know their primary job is to stop the virus from becoming a disease or lessen the disease….

Another: If vaccines being rolled out worldwide ward off not only symptoms but the virus itself, it could sharply slow the pathogen’s spread and hasten the return to normalcy….

And another:
Importantly, the initial COVID-19 vaccines will prevent symptoms in those who become infected with the coronavirus rather than kill the virus itself, Anthony Fauci, MD, director of the National Institute for Allergy and Infectious Diseases.

Initial vaccines? They’ve only been out 3-4 months! What,,, the poor bastards that took them have to take the new and improved version?

And another: Preventing symptoms is a “primary endpoint” in the vaccine development process, Fauci said. Getting rid of the virus altogether is considered a “secondary endpoint.”

Secondary! So it’s not a ‘vaccine’ but rather a medicine?

Vaccine Definition: any preparation used as a preventive inoculation to confer immunity against a specific disease, usually employing an innocuous form of the disease agent, as killed or weakened bacteria or viruses, to stimulate antibody production.

And notice they always mention the first and probably only vaccine that actually worked…. Cow Pox to prevent Small Pox.

I’m in my seventies and I will have to be beaten, drugged and dragged to that needle.

I donete the vaccine stored ” for me” to any willing jew to take it!!!

So the experimental CV-19 vaccine will save me from the WooHooFlu hoax ?? During my 3 tours in Vietnam they repeatedly told me that agent orange killed only plants. Either they were lying or I, along with my many dead team mates, are/were plants because AO has killed them, and it’s killing me.

JABS are doing what Bill Gates & Friends expect from them, especially in… 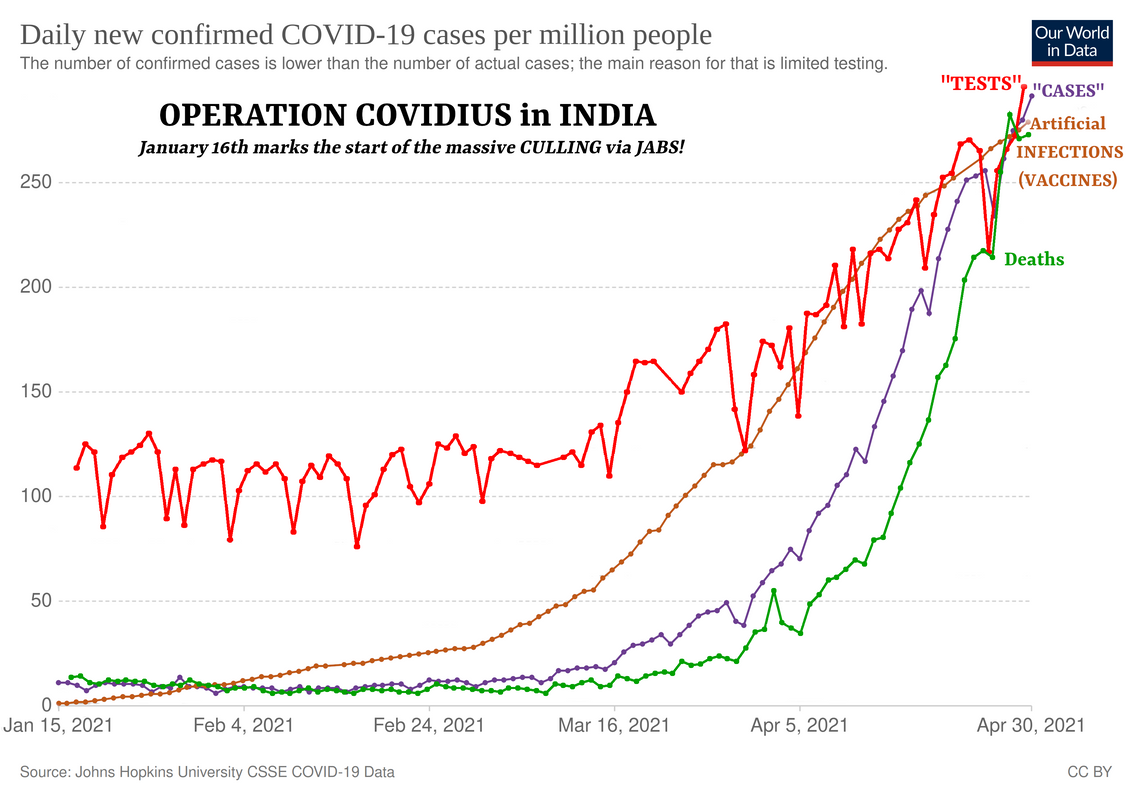 Here it is, in the FDA Fact Sheet which is handed out before you get your ‘jab’.

MAY prevent you from getting COVID-19. MAY NOT protect everyone. There is NO FDA-approved vaccine to prevent COVID-19.

The only certain difference between you unvaccinated and you after being ‘fully vaccinated’ is that you will have an extra hole in your arm that you did not have before. You still may catch COVID-19, and your chances of doing so are not guaranteed to be diminished by your ‘vaccination’. If you do become infected,. your capacity to infect others is not diminished by your ‘vaccination’. You will still have to wear a facemask and socially distance from others, even when all of you are ‘vaccinated’.

Does it still sound so awesome that you can’t wait to take a selfie of yourself ‘getting your jab’?

When I’m asked if I’m vaccinated ?
My answer is ?
I identify as being vaccinated & if you doubt my word, then you must be a homophobic bigot….

0
Reply
Thank you! Please check your inbox to verify.
Do Click