Hunter Biden Is the Subject of Criminal Probe. But Wait, Didn’t US Regime Media Assure Us It Was “Russian Disinformation”?

The now-validated facts about Hunter are precisely those the U.S. media — in tandem with Silicon Valley and the intelligence community — suppressed based on lies 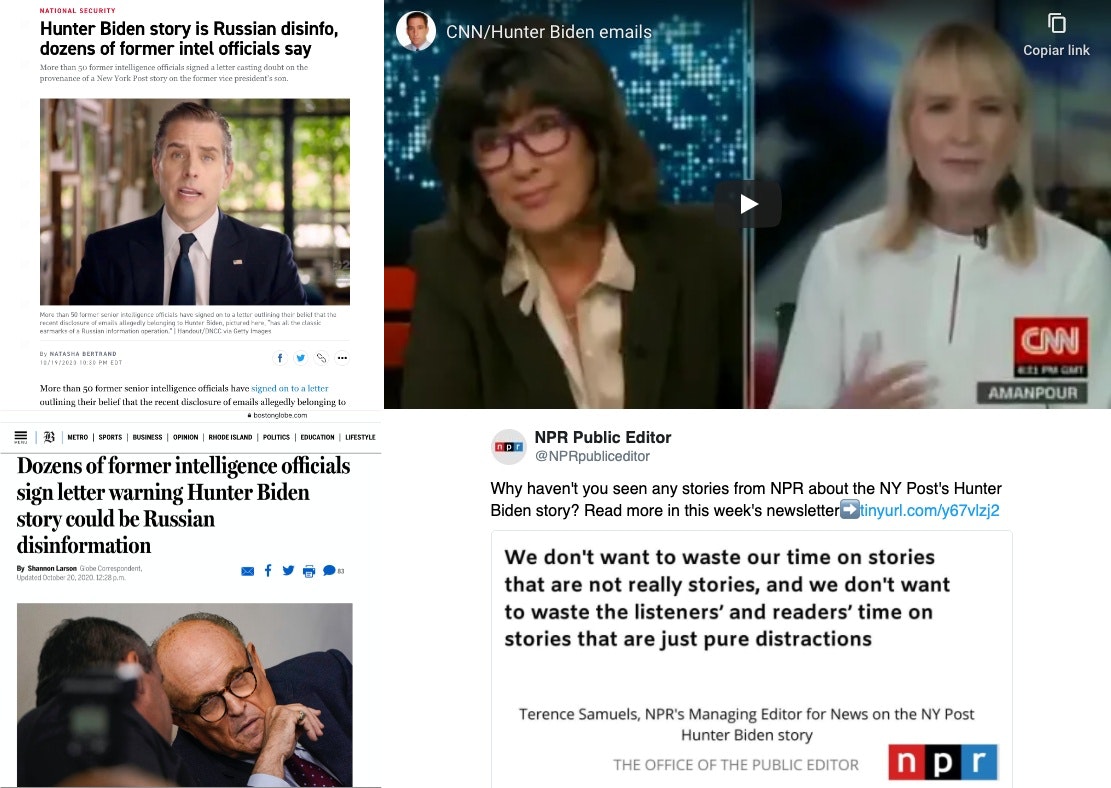 The revelation that Hunter Biden is being criminally investigated for his business activities in China came on Monday from the investigative target himself, and he predictably and self-servingly depicted it as just a narrow probe about his “tax affairs” by the U.S. Attorney for Delaware. As I wrote last night, that by itself would be significant enough — the documents published in the weeks before the election by The New York Post contained ample information about exactly that matter, yet were widely repressed by a union of mainstream news outlets, the intelligence community and Silicon Valley based on propaganda and lies. But new reporting suggest the investigation has been far broader.

“The federal investigation into President-elect Joe Biden’s son Hunter has been more extensive than a statement from Hunter Biden indicates,” Politico reported Monday night. Specifically, “the securities fraud unit in the Southern District of New York also scrutinized Hunter Biden’s finances”; “investigators in Delaware and Washington were also probing potential money laundering and Hunter Biden’s foreign ties”; and “federal authorities in the Western District of Pennsylvania are conducting a criminal investigation of a hospital business in which Joe Biden’s brother James was involved.” CNN’s Shimon Prokupecz added that “at least one of the matters investigators have examined is a 2017 gift of a 2.8-carat diamond that Hunter Biden received from CEFC [China Energy’]’s founder and former chairman Ye Jianming after a Miami business meeting.”

All of these topics are what the large bulk of the U.S. media, working in concert with the intelligence community and Silicon Valley, suppressed prior to the election. One of the first New York Post articles based on materials from Hunter’s laptop, headlined “Emails reveal how Hunter Biden tried to cash in big on behalf of family with Chinese firm,” described how he “pursued lucrative deals involving China’s largest private energy company — including one that he said would be ‘interesting for me and my family,’” and specifically noted that Hunter “was identified as ‘Chair/Vice Chair depending on agreement with CEFC,’ an apparent reference to the former Shanghai-based conglomerate CEFC China Energy Co.”

That was the same email that referenced ten percent to be “held by H for the big guy” — which one of Hunter’s business partners on the email chain, Tony Bobulinski, stated categorically referred to Joe Biden. The Wall Street Journal columnist Kimberly Strassel similarly reviewed numerous laptop documents and reported that “records produced by Mr. Bobulinski show that in 2017, Hunter Biden and James Biden were involved in negotiations about a joint venture with a Chinese energy and finance company called CEFC China Energy,” adding that the documents also “make clear that Hunter Biden saw the family name as a valuable asset, angrily citing his ‘family’s brand’ as a reason he is valuable to the proposed venture.”

The pre-election article I wrote and was blocked from publishing by The Intercept, which precipitated my departure from that outlet, extensively discussed these documents’ revelations regarding the attempts by Hunter and Biden’s brother Jim to exploit the former Vice President’s influence in China to generate profit for the Biden family. Among other things, the censored article described “the Biden family’s pursuit of business opportunities in China,” referenced “proposals for lucrative business deals in China that traded on his influence with his father,” discussed the possibility suggested by the emails that “Hunter along with Joe Biden’s brother Jim were planning on including the former Vice President in at least one deal in China,” and argued that these documents raise the critical question of “whether Biden ever knew about business proposals in Ukraine or China being pursued by his son and brother in which Biden was a proposed participant.”

All of these vital facts and questions about Hunter’s activities in China were largely suppressed from the voting population by the bulk of the U.S. media, working in tandem with Silicon Valley (which simply prevented the story from being discussed and shared on its key platforms), and the intelligence community. How was this accomplished? Largely through outright propaganda, a blatant two-pronged lie: that these materials should be ignored because they constitute “Russian disinformation.”

There has never been any evidence that Russia played any role whatsoever in these materials (The New York Times acknowledged that “no concrete evidence has emerged that the laptop contains Russian disinformation” and the paper said even the FBI has “acknowledged that it had not found any Russian disinformation on the laptop”). This newly disclosed criminal probe obviously constitutes very strong evidence of their authenticity, as was the confirmation at the time from several participants in the emails that they were genuine. Critically, not even the Bidens denied the materials from the laptop were authentic, as The Times noted last night in its story about the criminal investigation into Hunter: “The Biden team has rejected some of the claims made in the NY Post articles, but has not disputed the authenticity of the [laptop] files upon which they were based.”

Even the letter used by these media outlets to peddle the “Russian disinformation” lie — from known liars: former CIA and other intelligence community leaders, who claimed that the Hunter laptop story “has all the classic earmarks of a Russian information” — admitted that “we do not have evidence of Russian involvement.”

In sum, we have the extraordinary historic disgrace of media outlets collaborating with the intelligence community in the weeks before a presidential election to manufacture and peddle a propagandistic lie to justify censorship of highly relevant materials about the presidential front-runner and his family’s efforts to profit off his name — namely, that the documents were not authentic but rather “Russian disinformation.”

It is vital to recall which media outlets did this and how they deceived the public yet again:

U.S. intelligence agencies have informed the White House that Giuliani has been in contact with alleged Russian intelligence agents. The FBI has been looking into whether the Russians played any role, and no official has ruled that out.

At the same time, dozens of former intelligence officials have said the story has the hallmarks of a Russian intelligence operation. After the election interference of 2016, the news media is especially wary of doing anything to further an effort by a foreign government to intervene in a presidential campaign.

This week, a group of former intelligence officials issued a letter saying that the Giuliani laptop story has the classic trademarks of Russian disinformation.

Whether they are real or fake is not the main point, argues Marc Polymeropoulos, the CIA’s former acting chief of operations for the Europe and Eurasia Mission Centre—one of more than 50 retired intelligence officials who signed a letter arguing that the email dump “has all the classic earmarks of a Russian intelligence operation”.

“We must treat the Hunter Biden leaks as if they were a foreign intelligence operation — even if they probably aren’t.”

This exchange between Trump and Lesley Stahl is insane. She repeatedly insists the Biden laptops “can’t be verified” so reporters shouldn’t talk about it.

Trump asks her why it can’t be verified.

Her answer: “Because it can’t be verified.” pic.twitter.com/cf9hcSGnrm 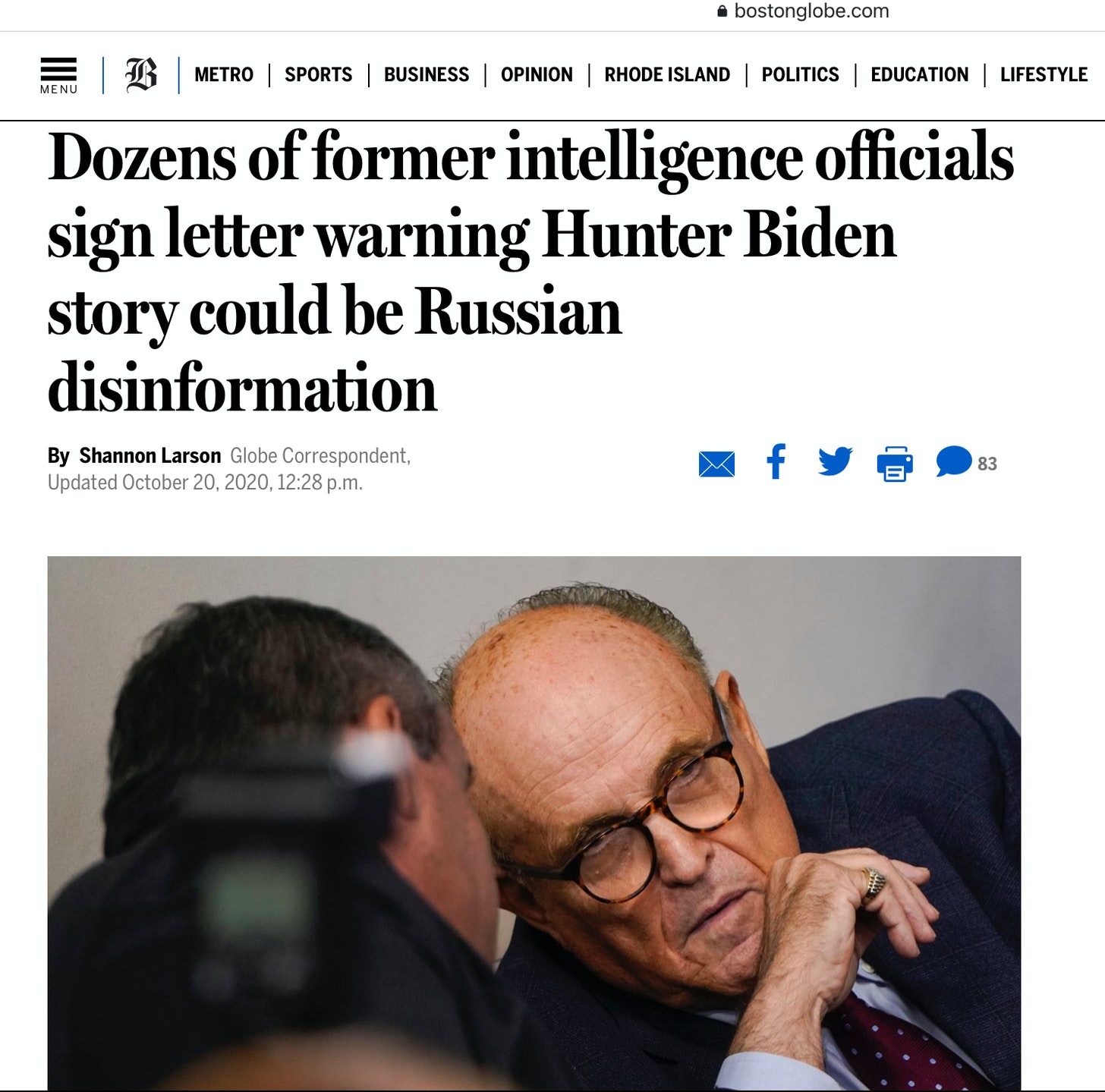 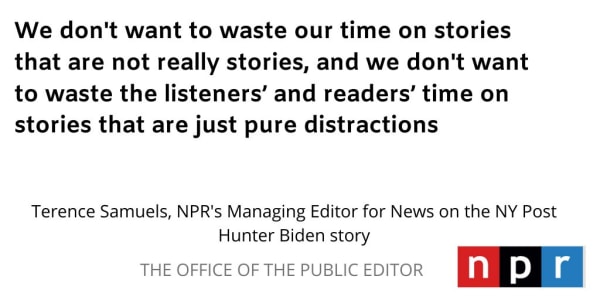 Leading up to the 2020 election, much of the U.S. media and Silicon Valley giants decided that ensuring Trump’s defeat was such an overarching goal, a moral imperative, that anything and everything was justified to achieve it — including uniting with the professional liars of the CIA to disseminate blatant falsehoods about the Hunter Biden materials in order to discredit them, lead the public to believe they should be ignored, and justify their own burying and censoring of these materials.

There were some noble exceptions, such as a Washington Post news story from October 24 which — despite its inflammatory headline: “Biden relies on pattern of activity to blame Russia for release of data from what is said to be his son’s laptop” — warned that “the former intelligence and defense officials who penned the letter explicitly said they had no evidence of Russian involvement” and “the Biden campaign’s decision to lean into accusations of Russian involvement in the episode, despite lacking specific proof, risks eroding public trust in U.S. allegations of foreign election interference if the suspicions in this case turn out to be unfounded.”

But most outlets which cited the letter from CIA and other intelligence officials simply omitted that no-evidence admission altogether, or buried it so deep in their stories and broadcasts that all the public heard was that these completely authentic and obviously relevant documents could and should be safely ignored as “Russian disinformation.”

That’s the choice these media outlets made. They got the election outcome they wanted. But they and their reputations and legacy will have to live with this choice.