North Korea’s diplomatic efforts continue to be very positive, and a sign that peace on the Korean Peninsula may be very achievable. On Tuesday, South Korean MP Young Chin and North Korea’s deputy head of Supreme People’s Assembly Ri Jong Hyuk met in Geneva. The two shook hands, and toasted to peace.

A top NIS official briefed committee members on the results of recent diplomacy, saying they saw “no changes” on the commitment to both denuclearization and holding an inter-Korean summit. The summit is expected to take place in April with talks later this week scheduled to work out details. The bigger news was in South Korea, however, where the National Intelligence Service (NIS) offered a report to the National Assembly on the peace process, saying they believe “North Korea is strongly committed to dialogue and also committed to denuclearization.”

The briefing lasted about 20 minutes, with the NIS conceding that denuclearization is “not guaranteed” to result directly from the April inter-Korean summit or the May Trump-Kim summit. They still remained upbeat on denuclearization remaining a long-term commitment for all sides.

This upbeat assessment from the NIS underscores the massive amount of progress made in the last few months, starting with the Winter Olympics. The North Korean delegation invited South Korea’s President Moon to Pyongyang, which is happening in April. A South Korean delegation dispatched recently to both Pyongyang and Washington D.C. secured a deal for Kim and Trump to meet.

All of this progress has thrilled North Korea, as it seems to be reducing the risk of war. South Korea has every right to be quite pleased as well, since much of it is the result of efforts facilitated by President Moon’s pro-diplomacy position.

China says Kim confirmed as much to them on his Beijing visit:

“If South Korea and the United States respond with good will to our efforts and create an atmosphere of peace and stability, and take phased, synchronized measures to achieve peace, the issue of the denuclearization of the peninsula can reach resolution,” Mr. Kim said, according to Xinhua’s summary of his meeting with Mr. Xi. 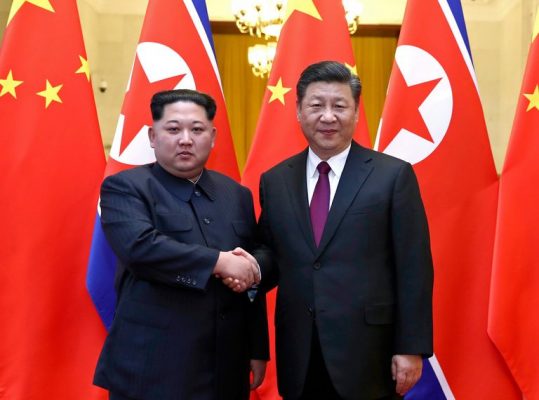