More blowback from the anti-Huawei crusade

As Huawei counts down the days to the launch of its latest smartphone, the P40 Pro, its loss of Google continues to take a huge toll. The Google/Huawei back and forth has dominated the U.S. blacklist headlines, and has resulted in the Chinese giant working up its Huawei Mobile Services replacement for Google, which includes a fully-featured app store and underlying services such as navigation.

What hasn’t been on the cards yet has been search. And why would it? Any browser can quickly access search engines of choice, as long as access to those engines are not restricted. But search is obviously much more integrated than just browser home pages now. News, weather, travel, media—we see the results of those engines stitched through our devices. The power in the hands of Google, particularly, has driven phenomenal financial success, but also responsibility [“responsibility”] for influencing the content that many of us now see first and foremost day by day.

And so the surprise news leaking out of Huawei this week is huge—Huawei Search is on its way, and will soon launch “as part of the Huawei ecosystem.”

Not only does this represent a further business risk to Google from the ongoing technology split, east versus west, but it also raises some significant questions around who curates and filters our news. [Are we raising these questions only now?] Huawei is the second largest supplier of smartphones worldwide, its global audience stretches way beyond China’s borders.

There are clear implications for a Chinese company, subject to China’s laws on content and censorship, filtering news for users around the world. Last month, by way of example, Chinese social media outlets, as well as Baidu, its leading search engine, were subject to state controls over publishing coronavirus information. While western platforms are also subject to censorship inside China, the question as to the pressure applied to a Chinese company’s news outside China is unclear.

The team at XDA-Developers tested Huawei Search, reporting that is is “a basic search app that just lets you input a query to search the Internet for webpages, videos, news articles, or images.” But, by way of example, the weather data “is powered by Huafeng-AccuWeather, a joint venture that apparently sources forecast data from the China Meteorological Administration.”

There is no data available as to the source of the wider search results, “we couldn’t match search results from Huawei Search with results from Google, Yahoo, Bing, DuckDuckGo, Yandex, Ask, or AOL.” The software is licensed from Huawei’s Irish subsidiary and appears to comply with relevant GDPR regulations around removing search data. XDA-Developers concluded that “it would be premature to say that Huawei Search is an alternative to Google search or Microsoft Bing, but there’s a possibility that this service could evolve into a decent competitor down the line.”

This isn’t a mapping app, it’s not a new front-end for our email or a payment processing engine. This is a potential filter that sits atop the World Wide Web, serving up content for hundreds of millions of users worldwide. Whether or not you believe the U.S. allegations that Huawei is controlled by the Chinese state, that it is subsidised and subject to Beijing’s national security laws, it is unarguably a company based in the most highly censored country on the planet.

Until now, this story has focused on the dedicated Huawei Search app. But behind that app sits a range of search engines and related services. And it is the prospect of those engines and their results being stitched into the Huawei operating system’s front-end that is more of a potential concern than the app itself.

I have commented before on the unintended consequences of the U.S. blacklist—Google and the U.S. losing their global influence on mobile standards, the launch of a third-way competitor to full-fat Android and iOS, the potential for Huawei to carve itself a dominant position overseeing that new alternative. This search news is a material further step in this, and from a transparency perspective has worrying implications. There is also the fact that search related data would be captured from the search history of those users.

If you want to see for yourself, Huawei Central has published a link to download Huawei Search, even though “you will not find this app on AppGallery because it’s still under internal testing and not launched publicly.”

In the meantime, Google has reportedly applied for a U.S. Commerce Department license to restore its supply lines to Huawei. This would return its software and services to the Chinese giant’s Android users worldwide. And if that happens there will be a different question: Which of Huawei’s alternative apps and offerings will be shut down, restricted to China or carried as alternatives on its devices?

Another example of the US shooting itself in the foot, or rather somewhere higher up in its anatomy. It has handed over control of the information control of the world, which is good for those who like more choices and not so good for Big Brother and the CIA. USA: OWN GOAL!!!

I believe on the basis of watching Huawie’s performance that concerns about their search engine outside China will not eventuate. The Chinese government has been under siege since 1949, and its domestic controls are precisely that — domestic.

Chinese interference, which is different from influence, is for China best left at zero. It needs to maintain that to become again the ‘middle kingdom’.

The stratagem of the government and Huawei are in-sync, as seen in their 5G technology, no backdoors, control lies with the national states, open sourced architectures. A search engine is confined by the IP addresses that are open or closed by national governments. Other than that governments can and do regulated home-grown content as they will; none of which need be of concern to a search engine as such.

China unlike the US has no empire and needs none, it can and does influence the world, but at a distance. If it were not for the US in the Pacific, its naval power would be modest, but the one belt is under threat from the senile US and its sycophants that I expect the reverse to happen, that is not only will the US be outgunned, which I believe has been achieved, but the tonnage of war ship will outstrip it, with many more smaller warships than it can muster even with its ‘allied satraps.

The Chinese is signaling the rise of social democracy over the corpse of liberal democracy, the diplomatic, economic, military relations are in flux now, and while this will not mean an end to conflicts in the world (internal and external to nations states). its will be the demise of empires as we know them.

Huawei has flat structure, managers serves the productive process by oiling the machine, the dominance in the west of the professional managerial class that destroys productive capacity (its only collective talent) is counter productive to the surge in Chinese technology in the electronics field that is already sweeping away 30 years or more of accumulated crap.

Huawei AI search engine, running through the most sophisticated communications and server network (Kupeng chip set), on small devices running Kirin, can achieved the sort of fine tuned searching, that learns from the user, that is technically incompatible to any sort of managerial control. Re Putin that AI will eliminate management.

One last word on management. Some believe that Heydrich made Eichmann; the triuth is the Eichmanns created Heydrich.

Google is slipping badly due to censorship. I often use duck duck go where I can find so much not in Google. then there is bit chute for youtubes because Google removed so many of them. The monopoly of search engines is breaking down.

“it is unarguably a company based in the most highly censored country on the planet.”

Nonsense. The PRC has explicit censorship with explicit rules refereed by the country’s most famous public intellectual. The result? 80% of Chinese trust their media (compared to 72% of Singaporeans, who have a similar censorship regime).

The USA has implicit censorship with implicit rules applied by private corporations and overseen by the President of the USA, who controls all information through EO 10995 & 12472. The result? 32% of us trust our media–on a good day. 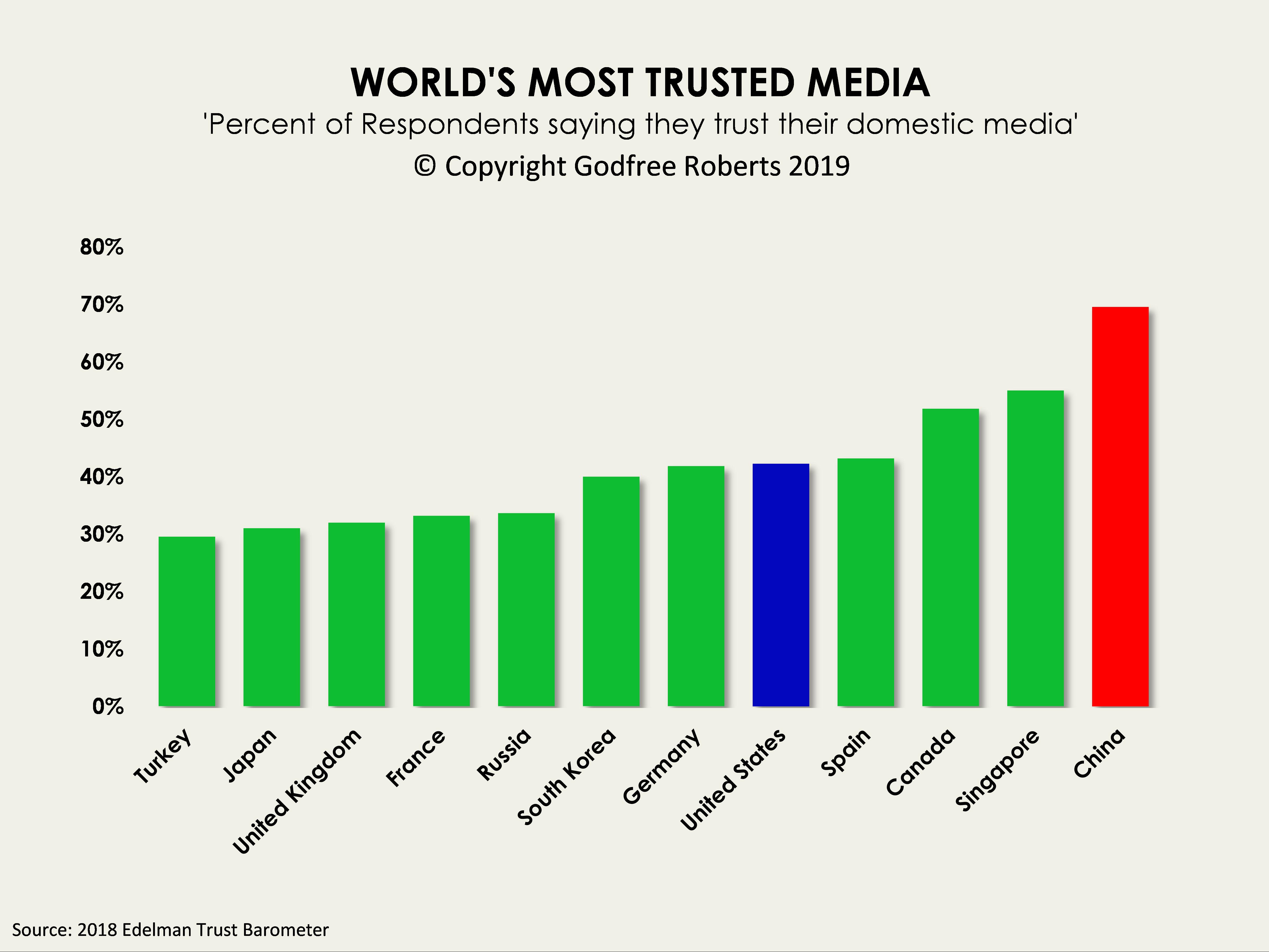 I cannot believe anyone could be so dumb as to buy a smartphone and rely on Google only to provide ‘news’ and info. When the entire internet is in our hands it’s time to explore the alternatives, but the motivation can only come from doubt, doubt in the veracity of what is being fed to us by big bro.