Soviets only got involved after the US had done so first, and after years of trying to hold the Vietnamese back, even at the cost of losing nearly all influence in Hanoi to China

John Wayne’s Vietnam-era pro-war classic, The Green Berets opens with a scene of a press conference. A group of Green Berets start by introducing themselves to the press, followed by a Q&A session with two Green Berets sergeants who have been assigned to answer questions.

The scene reaches a crescendo when a reporter asks one of the sergeants if the war in Vietnam does not seem like a war between the Vietnamese, and if the Americans should therefore stay out of it. Upon hearing this, the visibly irritated sergeant proceeds to pick up captured Viet Cong firearms from a display board nearby, dropping them in front of the reporter one by one, all the while explaining in a voice laden with hostile emotion that the weapons are Chinese-made, Soviet-made and Czechoslovakian-made respectively.

The message is clear. The war in Vietnam is not merely an inter-Vietnamese conflict; because quite aside from the American factor in the war there is also the Soviet, the Chinese, even the Czechoslovakian factor. It is thus because of this involvement of foreign Communist powers in Vietnam, that the United States has to involve itself on the other side.

Now it is easy to see the inadequacy of that argument. Providing war material, even on a vast scale, is in no way comparable to a direct military intervention carried out with a force of half a million soldiers, which is how many the United States had in Vietnam at the time The Green Berets aired in 1968.* Clearly the American involvement in Vietnam went far beyond what was necessary to balance out the involvement of the Soviets, the Chinese, or the Czechoslovaks, on the side of Hanoi.

But is it even true that the American involvement was a reaction, perhaps an exaggerated reaction, to the Soviet, etc involvement? What were the actual cause and effect, in life rather than on film? Were the Americans in Vietnam because Soviet shipments of weaponry were going there, or were the Soviets shipping weaponry to Vietnam because the Americans had come there? How does this and other claims of war propagandists of the time stack up against what we know from the works of historians today?

In fact, before the American intervention in Vietnam the Soviet-Vietnamese relations were at their all-time low point precisely because the Soviet Union would not support DRV (North Vietnam) in reunifying Vietnam by military means. Soviet aid to DRV in this period, while the North was facilitating the struggle of the NLF (“Viet Cong”) in the South and before direct American involvement on a great scale, was relatively small and almost exclusively economic, not military.

When the unifying elections called for by the Geneva Accords of 1954 that had ended the French War in Vietnam did not come about, Hanoi gradually resolved to wage a military campaign to oust the American-backed government in the South. In this, however, it did not have the support of Moscow.

The Soviets feared American intervention which would have to result in an American-Soviet confrontation that would interfere with their policy line of “peaceful coexistence” with the Capitalist bloc. They made it clear to Hanoi they supported its struggle to reunify Vietnam only in as much as it was pursued by diplomatic means and encouraged Hanoi to pursue a peaceful strategy.

Vietnamese Communists shared many of the concerns being voiced by Moscow, but ultimately pressed on regardless. Both the Vietnamese and the Soviets were acutely aware that waging a violent struggle for reunification could result in an American invasion in Vietnam. They were both uneasy about this prospect and regarded it as highly undesirable, even disastrous. The difference was that the Vietnamese were ultimately willing to accept a confrontation with the Americans if they stood in the way of the reunification of their country, but the Soviets were not. 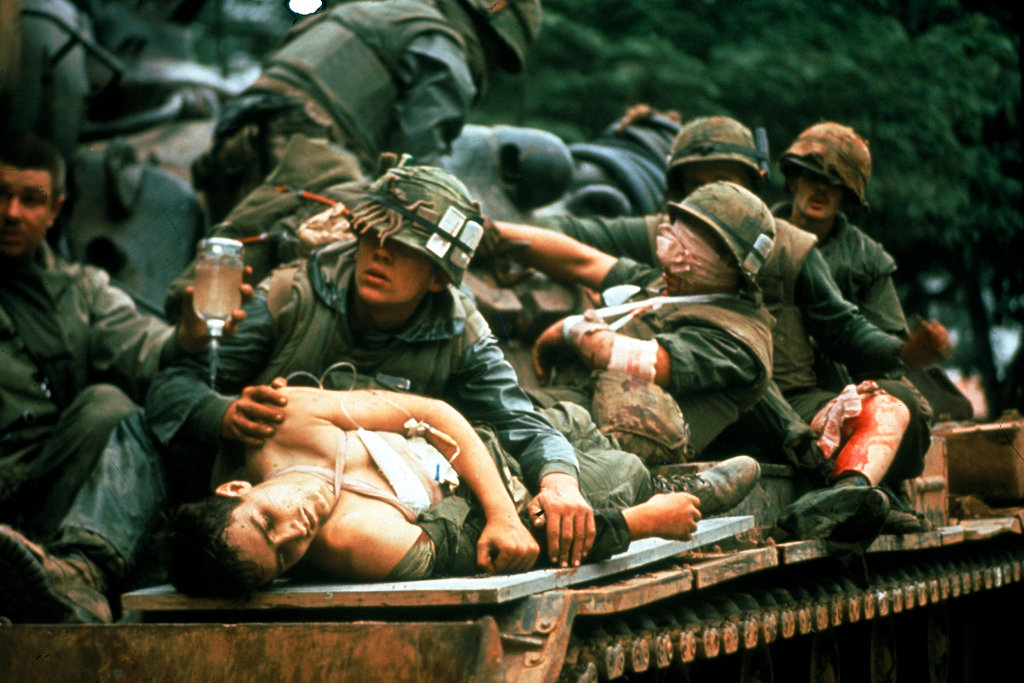 It was not until the time of the Gulf of Tonkin Resolution, which marked the official entry of the United States into the war in Vietnam that the USSR began to provide DRV with military assistance. The Soviets had held back on providing Vietnamese Communists with war material because this would encourage them to wage war in the South, which could in turn result in an American intervention. Now that Americans had intervened regardless, the Soviets no longer had a reason to continue to hold back. Whatever they did, the Americans were already in Vietnam. Now they would provide the Vietnamese with aid, because that was the only way these could hope to prevail against the Americans.

An additional reason for the Soviet reversal on the question of military assistance was to regain the influence they had lost with North Vietnam to China. In 1954 Moscow and Beijing had pressured the Vietnamese Communists into signing the Geneva Accords, which ended the French War in Indochina, but also split Vietnam in half.** Since then both China and the Soviet Union acted as a moderating force on Hanoi. They encouraged the Vietnamese to pursue the goal of reunification by peaceful means only, even after these had clearly shown themselves to be ineffectual when unifying elections called for by the Accords failed to materialize.

Following the Sino-Soviet split, however, Beijing gradually moved away from this position and came to see a military struggle could complement diplomatic and propaganda efforts. In time, the Chinese position would become further radicalized and they would reject the notion that negotiations could be of any use at all. It is important to understand, however, that Beijing came to approve of the armed struggle of the Vietnamese only in 1961, fully two years after the Vietnamese had already gone ahead with it anyway.

The change in the position of the PRC and the resultant increase in assistance to Vietnam enabled the Chinese-Vietnamese relationship to thrive. In the context of the Sino-Soviet confrontation within the Communist camp North Vietnam was now aligning ever more closely to China. That is, until the American intervention in the war caused the Soviets to launch a giant, Lend Lease-like program of military assistance to the DRV and regain their lost influence with Hanoi.

The key thing to take from here is that it was empathically not the case that the Vietnamese fell under China’s influence which directed them to pursue the goal of unification of their country with military means. Instead the Vietnamese were orienting themselves to that of the two Communist powers which would support them in their own policy line on South Vietnam. Chinese-Vietnamese relations could thrive precisely because China had come to adopt Hanoi’s view of peaceful means to reunify Vietnam as inadequate. The Soviet Union in turn could regain its influence over DRV and pull it back from the Chinese camp only when it had dropped its opposition to the military struggle of the Vietnamese.

The presence of Soviet and Chinese-made firearms in Vietnamese hands did not in fact point to the latter being simply the agents of monolithic Communism with designs over the entire globe as John Wayne wanted Americans to believe in 1968. In actuality, by going to war the Vietnamese Communists had defied the Kremlin and had frustrated its plans. It was precisely by opting for a military struggle that the DRV leadership had demonstrated its freedom of action. It was also the case that the USSR did everything it could to spare the US its calamitous war in Vietnam.

The Soviets attempted to dissuade the Vietnamese leadership from waging a military struggle even at the cost of losing nearly all its influence in Hanoi and seeing North Vietnam slide into the Chinese camp. If the mistake the Soviets committed was failing to appreciate just how important it was to the Vietnamese to reunify their country, it was a mistake the Americans tragically made as well. In part, due to propagandists like John Wayne who put out the idiotic drivel of the Vietnamese struggle for reunification as a matter of “world Communist domination”.

*Albeit by the time The Green Berets aired this was no longer the case, the Chinese also stationed troops in Vietnam, specifically in the Communist-run Democratic Republic of Vietnam (North Vietnam), but on a far smaller scale. In all 320,000 Chinese anti-aircraft and engineer troops served in Vietnam in comparison to 2.7 million Americans. The Chinese deployed in North Vietnam in mid 1965, in response to the Americans landing in the South. They evacuated in early 1968, having suffered about 1100 dead, mainly in the American bombing of the North.

**The two Communist powers went as far as to signal the Viet Minh that rejecting the Accords may result in their ending their material assistance to the movement’s struggle.