How Is Confiscating $300bn of Russia’s Reserves Different From Bombing It and Causing $300bn in Damage?

Russia can’t access its euros and dollars which it stupidly held in banks of its enemies and which together make up about one-half of its $630 billion reserves.

So let’s get this straight. For many years Russia imposed austerity on its people, using oil proceeds that could have funded its hospitals, schools, and pensions to instead raise its balances in accounts in foreign banks.

Now that it would really like to start making withdrawals from those balances, its enemies say: Sorry, can’t do that.

For all that oil it sent out Russa has exactly nothing to show for. It is as if for many years Russia had been giving its oil away for free.

$300 billion, that is enough to fund the Russian military for 5 years. The US equivalent to that would be over $3 trillion.

What would the US do if somebody had “frozen” $3 trillion of its monies?

The Empire says the funds are frozen to prevent Russia from stabilizing its currency during the war. But when the war ends the freeze will stay on and the justification will change.

The real reason the freeze will be maintained will be to prevent Moscow from carrying out reconstruction in Ukraine. $300 billion buys a lot of friends and a lot of loyalty.

One only needs to look at Chechens who, having been lavished with cash and reconstruction (70% of their budget still comes from federal subsidies), now serve as Russia’s unlikely urban-warfare shock troops. (Many of them ex-rebels, including Kadyrov himself.)

And it’s only a matter of time until the funds are unfrozen to set aside for paying out bounties on Russians in Ukraine, funneling arms, and scheming regime change in Moscow. 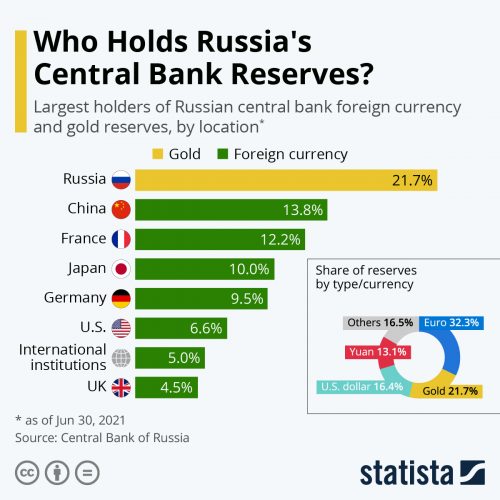 Words can not convey just how stupid it was of Kremlin to allow this to happen. Did Kremlin after all these years and all the signs still not truly fully understand just how despised and disrespected Russia was in the West?

I thought that going into Ukraine meant that Moscow had resigned itself to — and prepared for — a total break with the West, but guess not.

I don’t want to hear anyone using Putin and judo in the same sentence ever again. Miss me with that 5D stuff.

Russia has so far been fairly quiet about this theft. Possibly because it doesn’t want to be seen as panicking which could hurt the ruble further. And because it has enough on its plate right now with the war.

Once the war is wrapped up I have no idea how Russia gets its money back.

An oil embargo would seem to be appropriate. But that would hurt the entire world, Africa and China included.

(If Russia kept selling to China it wouldn’t work, it would merely reshuffle the deck in terms of who was sourcing from where.)

When the “freeze” was announced Putin responded by elevating Russia’s nuclear posture.

When the war is wrapped up will the nuclear threat become a little more explicit and directed? Say against “neutral” Austria and non-nuclear Germany which hold a chunk of Russia’s euros?

Two hours to release the funds before a city to be determined by lottery is turned into nuclear ash?

Or perhaps Moscow can come up with something a little more imaginative to get its stash back? (Albeit it had failed to imagine the funds would be taken so there’s that.)

To steal land from each other, that’s what countries and states do and always have. (Ask Belgrade if it has had any land recently stolen from it.) But to be stealing money like that? There’s something so underhanded about that.

I don’t know how Russia reacts to this once its hands are freed, but if it doesn’t cause a major incident over this once the war is out of the way, then it’s not a great power, but just a big Venezuela.

Russia’s yearly gross export earnings from crude oil, refined oil, and natural gas are $215 billion, but not all of that is profit.