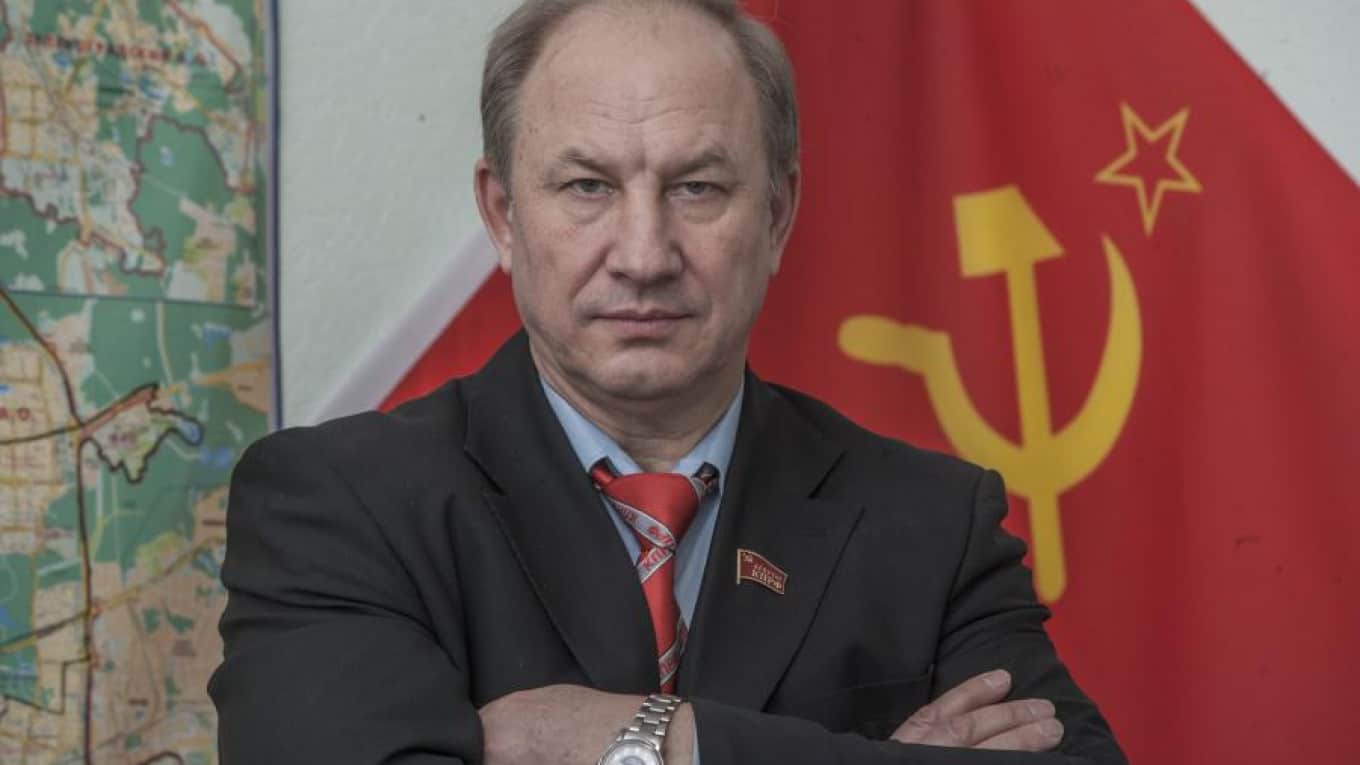 Under Russia’s COVID protocols virtually all public demonstrations are banned. There isn’t necessarily a blanket ban, but in practice the permit is almost never given (except at times to United Russia-friendly events). In effect, the Russians have lost the right of peaceful assembly.

Or they would have, but for one man. Valery Rashkin, a Communist Party MP from Moscow. Time and time again he has helped Moscovites hold rallies by attending them and dubbing them “meetings with an MP” which are legally protected.

In this way he has not only shielded and made possible Communist Party events, but all manner of other social protest. For example rallies of apartment-building residents against Sobyanin’s policy of tearing down Khrushchev-era low flats and resettling the residents in high-rise replacement buildings, which is done whether all residents agree to the scheme or not. (Moscovites widely regard the policy of bulldozing their beloved neighborhoods as a way for Sobyanin to earn massive kickbacks from the “construction mafia”.)

He attacked Sobyanin for revoking public transport discounts for unvaccinated pensioners, and has penned anti-mask and anti-forced-vaccine columns.

Since February 2015 he is on an EU sanctions list over his support for rebel Donbass. Since April 2016 he is sanctioned by the US as well.

One write up from June put it this way:

In 2021, only three forms of street activism have been possible in Moscow: “Navalnings” (such as in January and April), “Putings” (such as in March) and “Rashkings,” named in honor of Communist MP Valery Rashkin, who does not get tired of defying the de facto ban on rallies by holding “meetings with an MP” (that is, with himself), since by law such meetings do not require prior authorization.

This spring alone, Volja has written several times about progressive “Rashkings” (against infill construction in Kuntsevo; against the planned demolition of the Palace of Young Pioneers; and, no less than four times, against the law banning educational outreach activities; in particular, I published an overall report and a separate remark about provocateurs).

It is clear that the Communist Party as a whole does not arouse much interest among political observers, but it seems that Rashkin is something special.

And a report from February for some context on the circumstances:

The Moscow City Committee of the Communist Party of the Russian Federation will bring its supporters to the demonstration and rally on February 23, despite the fact that the rally is not authorized by the authorities, the first secretary of the city committee, State Duma deputy Valery Rashkin told Kommersant.

According to him, the mayor’s office did not offer alternative options, as required by law, so the event can be considered sanctioned. However, in the regions, the communists are not ready for unauthorized actions. The retaliatory measures will depend on the behavior of the demonstrators, a Kommersant source in the Moscow mayor’s office warned.

“On February 23 we have a holiday, the Communist Party has made applications to hold processions and rallies throughout the country, and the authorities refuse almost everywhere.

Let’s allow rallies, including in Moscow, from Pushkin Square to Teatralnaya. We invite all factions.”

Recall that on February 8, the Moscow City Committee of the Communist Party applied for a demonstration of 5,000 people on Strastnoy Boulevard, followed by a rally on Teatralnaya Square. However, the capital’s regional security department did not authorize it due to the continued high alert due to the coronavirus epidemic. The mayor’s office reminded that the organizers and participants of the action can be held accountable.

However, Valery Rashkin is sure that the department’s response can be interpreted as consent to hold a demonstration and rally, since it does not contain specific proposals to change the place, time, form and other conditions of the event, which is provided for by the federal law “On Assemblies”.

“Therefore, we can conduct the promotion as indicated in our notice. In the end, it cannot be that during a pandemic, only flash mobs in support of the president can be carried out, “Mr. Rashkin told Kommersant.

As Kommersant reported earlier, in the event of a refusal, Valery Rashkin planned to hold a meeting with voters, and in a number of regions the communists announced that they were ready to take part in unauthorized actions.

However, now only the Lipetsk region adheres to a similar position with the capital city committee : the mayor’s office there also did not offer alternative conditions for the rally, so the communists consider it permissible.

The Sverdlovsk regional committee explained to Kommersant that they “received the Central Committee’s instructions” to conduct an unauthorized action, but its possibility is still being considered.

In the Primorsky Territory, the communists also did not receive approval for a rally in the city center and plan to come to the Hyde Park on the outskirts (there you can hold rallies without permission from the authorities).

In the Saratov region, the authorities asked the communists to reduce the number of participants from 300 to 49 people, and they applied again.

In the Perm Territory, the Republic of Chuvashia and the Samara Region, where the Communist Party of the Russian Federation also did not exclude an unauthorized action, the party members decided to “express their protest with single pickets.”

Irkutsk communists, who promised to go to the rally “in any weather and any reaction of the authorities”, are now talking about “holding meetings with deputies.”

In St. Petersburg, the Communist Party “is thinking about a new format,” but will keep it secret “for the success of the action.”

The Krasnoyarsk communists also do not disclose the details of a possible action.

The Krasnodar Regional Committee of the Communist Party of the Russian Federation told Kommersant that “those who like to forbid them will not shut their mouths,” but the protest may take place in the format of a meeting with a deputy.

In the Stavropol Territory, the Communists intend to celebrate February 23 by laying flowers, round tables and distributing food packages to veterans.

In the Nizhny Novgorod and Orenburg regions, the communists appealed against the refusals in courts, the further fate of the shares will depend on the decisions of the courts.

And in the Sakhalin region, the rally was postponed for three weeks – to March 13-14.

Rashkin has been elected to the Duma five times and is the leading personality of Communists in Moscow City. Albeit a high-placed and long-serving member, he is considered a radical in the Party, who wants the outfit to be a true foe of United Russia and actually contest for power rather than just play-act at it. He has butted heads with the Party leadership over this, and has been purged from the Central Committee presidium earlier this year for it. (Nominally it was for his defense of a party colleague who was harshly disciplined by the Party for marching in a pro-Navalny protest.) 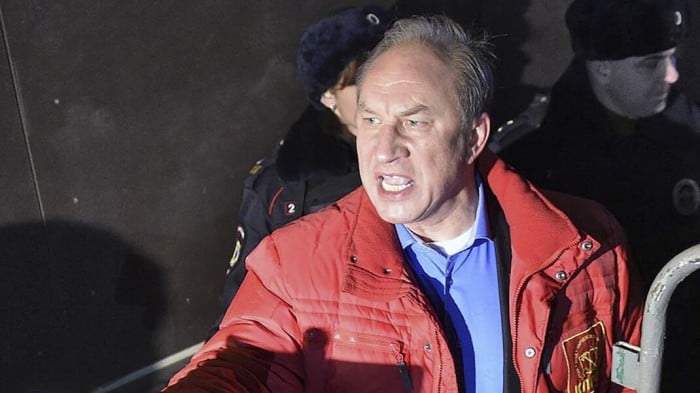 Ahead of the 2021 Parliamentary election, which is not looking great for United Russia responsible for lockdowns last year and coerced vaccinations this year, the authorities have barred a number of Communist candidates from running, most notably Pavel Grudinin who was the Party’s 2018 candidate for Russian President. The government banned him on the grounds that he owns foreign stock abroad (in Belize) albeit he says that he had divested himself years ago.

The Party’s reaction to the bans has been less than fully animated, to Rashkin’s displeasure.

Rashkin actually sought the Communist nomination for the 2018 Presidential election himself and ran far to the left of Grudinin. The latter is a businessman whom the Party ran in an attempt to appeal to voters outside its base.

United Russia has sought the agreement of all parties that they would campaign without mass events citing COVID concerns. Zhirinovsky’s Nationalists and a host of smaller parties acceded to the “Safe Election” agreement, the Communists and the small Just Russia party did not.