When Syrian rebel groups disallowed their members from signing up for Libya, Turkey stopped paying their salaries

Editor’s note: Great piece on how Turkey undermined the Islamist rebels in Idlib whose military defeat at the hands of the Syrian army it is now so loudly protesting.

As Syrian and Russian forces bombard Idlib and the Aleppo countryside, thousands of militants from the Turkish-backed Free Syrian Army (TFSA) who would presumably be defending these areas in Syria are instead in Libya. They’ve been flown to Tripoli by Turkey, at the request of the Government of National Accord (GNA), to fight alongside the myriad Islamist groups defending the key city from the advancing Libyan National Army (LNA), led by General Khalifa Haftar.

But according to Soleman Mohammad* a 21 year-old Syrian mercenary from Kafr Nabl, a town in the Idlib countryside, the TFSA in Tripoli are sufficiently motivated to fight in Libya. “There are Russians here,” he said. “Russian soldiers. The Turks confirmed this to us. I wouldn’t even hurt a Libyan here. But if I find a Russian, I will put a stick up his ass.”

Hasan Khalid*, a TFSA source in Afrin, told The Investigative Journal that Turkish forces are resorting to lies to keep the Syrians fighting in Libya both placated and motivated. “Of course there are no Russian soldiers there. If the Turks tell them there are Russian troops in Libya, and that the [TFSA] will get fight them, they believe they are fighting the same enemy that is destroying their cities in Syria. But of course, this is a lie, and Libya is not Syria. But these mercenaries believe whatever Turkey tells them.”

Soleman Mohammad said he hadn’t seen much fighting, but was promised that a major offensive would start soon. “With the help of the Turkish forces and their equipment, we will defeat the Russians,” he said. When asked about General Haftar and the LNA, Mohammad answered without hesitation. “Haftar hates the Sunni people,” he said. When informed that Haftar, like the vast majority of Libyans, is Sunni, he added, “I mean, he hates the Sunnah. He is Sunni in name only.”

Mohammad said that the Americans were on the side of Turkey and the GNA. When asked why he believed this to be true, he again said, “We were told by Turkey.” (Mohammad was not aware that President Donald Trump praised Haftar in a phone call to the General himself last year.)

Following German-led peace talks between the GNA, LNA, and their foreign partners in Berlin last month, a tenuous ceasefire was established between the rivals. But on January 28th, a Turkish ship carrying military vehicles and weapons arrived at the port of Tripoli, violating the ceasefire agreement and previously-established UN arms embargo. Abdullah Rahman*, a 26 year-old Syrian mercenary from the Sultan Murad faction sent a photo of a JMK Bora-12, a Turkish-made sniper rifle he says was part of the Turkish arms shipment.

When asked if he considered the Turkish-made weapon to be high quality, Issa Abbas*, a TFSA commander based in the Aleppo countryside laughed. “I don’t know,” he said. “The only time the Free [Syrian] Army sees weapons like that is in the movies. Or in the [online battleground game] PUBG. We have never seen this gun in Syria.”

In addition to bolstering the GNA with weapons shipments, Turkey has continued sending Syrian mercenaries to Tripoli. The militants cross into Turkey and are briefly held at military points near Gaziantep or in Ankara. They are sent to Istanbul via Turkish military plane, where they transfer to Libyan commercial aircraft to fly to Tripoli. (At the time of this writing, a TFSA source in Afrin said that around 100 Syrians were in Istanbul, where they would soon board a flight to Tripoli.)

Despite a monthly salary of $2000 or more, and additional benefits, such as Turkish citizenship for any militant who stays in Libya for six months, Turkey has had issues recruiting as many Syrian mercenaries as they’d like. According to Issa Abbas, last week, Turkish forces informed 9th Brigade TFSA factions stationed at points throughout the Southern countryside of Aleppo that they’d be left on their own, without Turkish support, to repel impending Syrian government and Russian Air Force attacks on the area. In protest, commanders from these factions threatened to stop allowing their fighters to join the fight in Libya. “But that ended very fast, because Turkey threatened to stop paying any salaries,” Abbas said.

According to Hasan Khalid, after reports of Syrian mercenaries being confined to camps for days upon arrival in Tripoli made their way back to Syria, other TFSA members soured on the idea of coming to Libya. Turkish forces encouraged the Syrian fighters in Tripoli to try to convince their friends back in Syria to consider the trip, promising the mercenaries a per-head bonus if they were able to successfully recruit.

Last week, Ahmad Ibrahim*, a 23 year-old fighter from the Sultan Murad TFSA faction sent a video of the villa he was sharing with several other militants. “This is the new house,” he said, panning around what looked to be a child’s bedroom. “Everything in Libya is great.” he paused his camera on a pack of Kent cigarettes. “And,” he added later, “they let us smoke weed here!”

Soleman Mohammad made similar remarks. “They smoke hash like cigarettes, and I spend all day high and laughing. I am expected to appear at the frontlines tomorrow, but I will be so high,” he said.

When asked if he would rather be at home in Syria, fighting to defend Idlib, Mohammad thought for a moment.

“Sure, I wish I was there, a little. My heart is there. But it doesn’t matter. The commanders, the Free Syrian Army, are selling [out] and walking away. So I have, too,” he said.

Soleman Mohammad* a 21 year-old Syrian mercenary I wouldn’t even hurt a fly here or there . But if I find you Takfiri, Wahabi rapist thug , I will put a stick in to your brainless brain. Sociopath terrorist rapist thugs 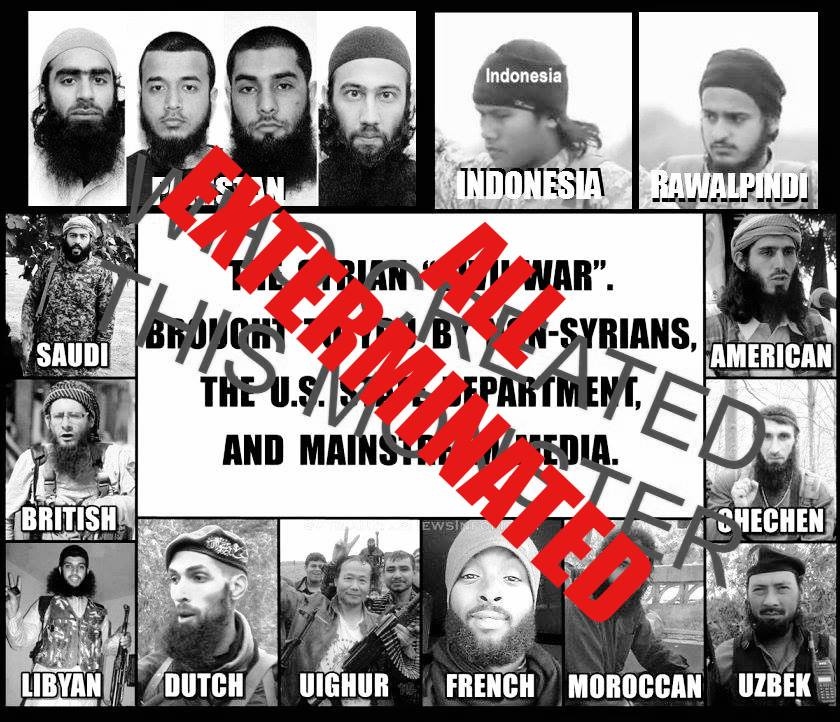 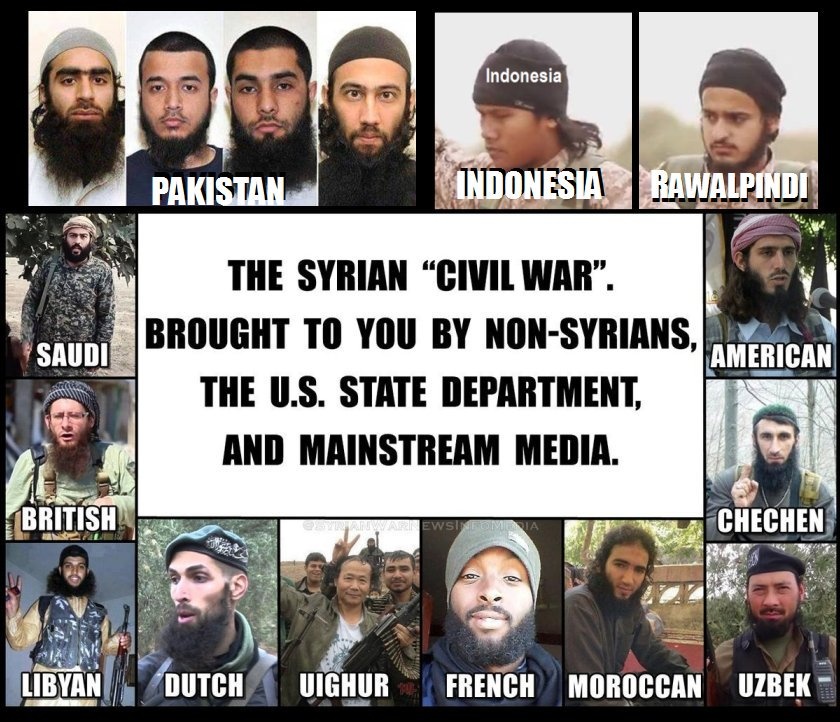 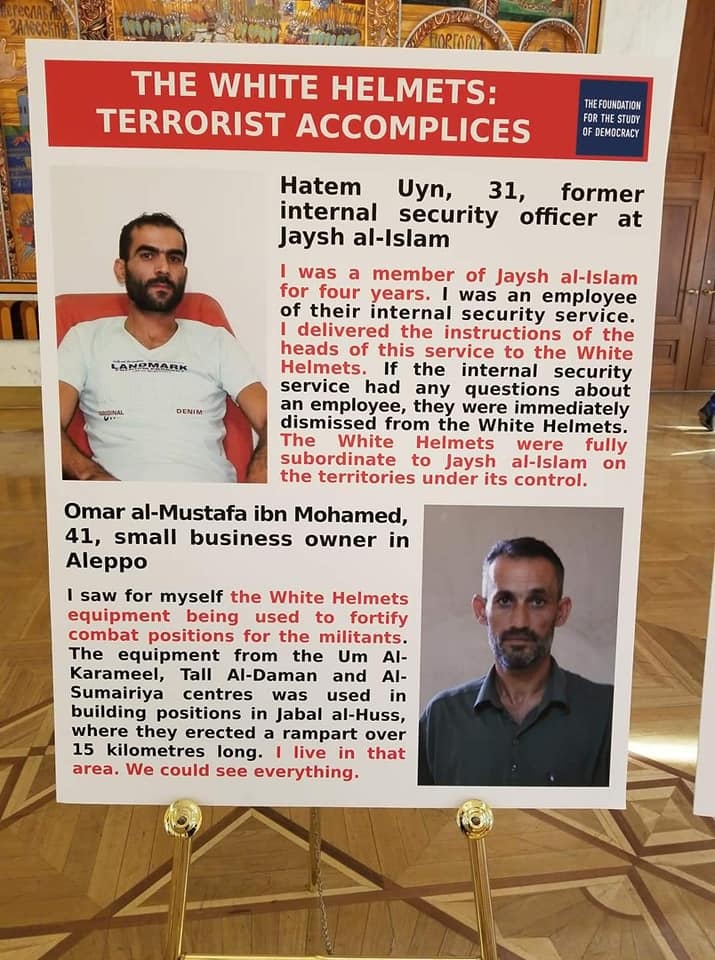 And we have a flow of terrorists in the opposite direction from Obama’s day when thugs (and weapons) in broken-down Libya were picked up by Americans to be dumped into Syria by way of Turkey.

Everything is starting to make perfect sense. The majority of people calling themselves ‘jews’ are directly related to the ancient Khazarians of the Khaganate. Remember that some ostracized, criminal turkmen tribes came together as a loose confederation to create the Khaganate. often referred to as Khazaria. The Khaganate had a short, stormy history (around 200 or so years), with their surrounding neighbors wiping out the Khaganate and driving the survivors off in all directions, primarily to the North, but many went west into what became Europe. The survivors vowed revenge, even if it took a millennia – well, here we are, a millennia later! The following should be required reading. https://archive.org/details/Andrey.DikyJews.in.Russia.and.in.the.USSR/mode/2up