Not "denazification", "decommunization" is the big war goal 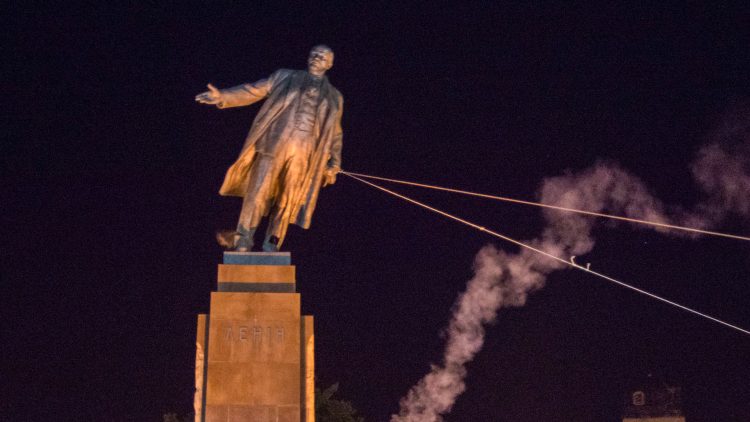 Putin has cited “demilitarization” and “denazification” as his war goals. There will be no “demilitarization”. The goal is to add Ukraine’s strength to Russia’s, or as much of it as possible. That includes its military potential.

Desire for “denazification” on the other hand is indeed one of the reasons for this war. I wrote that it would be a month ago:

It would be just as much about cleaning up historic Russian lands and cities of UPA pollution. Of refusing to allow a revision of how WW2 is told in Ukraine. It may sound crazy to be moved to war over such symbolic issues, but then there are others who would say that after food and shelter the symbolic stuff is the *only* thing worth fighting for. It is just that until July 2021 we didn’t know that Vladimir Putin may be one of them. Remember this is a religious issue for Russians. Russia’s real cult is not Orthodoxy, it’s WW2.

Euromaidan Ukraine isn’t a Nazi state, but it is one where neo-Nazis and Banderites are given more space, prestige, and respectability than is in good taste. Since that means that Nazis prance around places like Kharkov and Kiev which Russians understand to be historically common Ukrainian-Russian cities that is hugely offensive to Russians, the elite included. To tolerate Nazi and Nazi-adjacent symbols officially flown as far east as Mariupol would mean to live as if Barbarossa had never been reversed, though it had been, and though 25 million died to make it so.

Nonetheless “denazification” is not the biggest reason for the war. As Putin let it slip during his Feb 21 speech the key cause is actually “decommunization”. Specifically reversing the very worst aspects of Communist-era nation-building in Ukraine. Nation-building which took Rusin (“Ruthenian”) peasants who were on track to with urbanization become fully Russified, and instead worked overtime to push them into the then still fringe Ukrainian identity. There is no unringing some bells. Ukrainians will remain Ukrainians after the war, but instead of this ethnic identifier being packaged as eternal victims of Great Russian colonialism, it will be packaged as one of the branches of the “triune” Rus people together with Belarusians and Russians.

I wrote about that too:

Putin has already undone Khruschev’s legacy on Ukraine. If you’re someone like I who didn’t see that coming, then how can you be certain he won’t also move to undo Lenin’s legacy of spinning off Russian territory into an Anti-Russia? Specifically, after he wrote that that is something the country he is the president of can not allow?

As accusations are being flung about who is responsible for this war I think it is important to realize and to remember that the major cause of the present war was already baked in before any of us were born. Sure, NATO, missiles, and all that stuff played a part, but as much as Americans would like to believe otherwise, they are not always at the center of everything. This is an East Slavic civil war with largely East Slavic causes. It is literally the expedition of four East Slavic states (with Pridnestrovie not unsympathetic but too exposed to participate) against the one remaining East Slavic state which had strayed too far from the fold.

Of course, Lenin’s woke spin on nation-building did not make war a hundred years later inevitable. The Ruthenians/Rusini to the north of the Pripyat marshes were also herded by Communists into a non-Russian identity, yet there is no war between Moscow and Belarus. Belarus has never hidden from the reality that Ukraine and Russia are more than just generic neighbors. They are kin. By contrast, EuroKiev especially after 2014 moved to aggressively slash and burn the heavily intertwined links between the branches of the Rus. To place no less than a civilizational fault line between Kharkov and Kursk, between Ruthenia Minor and Ruthenia Major. What EuroKiev has sought to cut Putin’s Moscow has voted to preserve. Their fates will remain intertwined. In a bad way if necessary.

Finally, it is also the case that there is a Cold War II going on. A Cold War more dangerous and unstable than the first one, because where the West felt enmity towards the Soviet Union, toward Russia it feels only loathing. The difference between the two is fear. (After 1970) The Soviet Union was regarded as a near-equal and commanded a measure of respect. By contrast, seeing Russia started out from total collapse Moscow having any power or leverage at all — even just the power to not be a plaything of the West — is experienced as infuriating and ultimately illegitimate. Russia is less a powerful and worthy adversary, and more a deplorable spin-off away from civilization into retrograde barbarism that has somehow acquired an army and a navy.

Yet even though we find ourselves in the middle of this (highly unstable) contest between Washington and its bloc and Russia, it was not fully clear where the border between the two ran, and on which side of the border was Ukraine. Washington felt good about the situation where Ukraine for very little investment and very little risk was slowly drifting toward its side of the border. Instead, Russia has moved to demarcate that border here and now, and to do it on its own terms, at the cost of investment and risk that DC would never undertake for Ukraine, but that a nationalist Russia always would (we just didn’t know until now that Putin had indeed evolved into a credible Russian nationalist).

Another thing, I have criticized Putin for sprinkling his stated cause for war with outrageous FSB fakes. But when it comes to stating the real, ideological case for war he has been incredibly forthright. He stated it all already in his July 2021 article on Ukraine (the decision to go to war was probably already made before the first buildup of March-April 2021) that I heavily promoted on these pages, and cited on several occasions. He restated it again for the entire nation in his February 21st speech.

Everything was laid out in the open, but of course, being a head of state such episodes when Putin is leveling with his audience, are surrounded by episodes when he is serving up official double-speak. You have to know which is which. If it is as radical as his Ukraine article was it’s probably sincere. If he is instead downplaying something, eg saying that war is unthinkable, or that withdrawal is starting, or that war goal is “demilitarization” or that there will be no occupation, then that is something you really can’t take to the bank because that is something he would say whether it was true or not.