Maybe "rejects" is too strong a word... 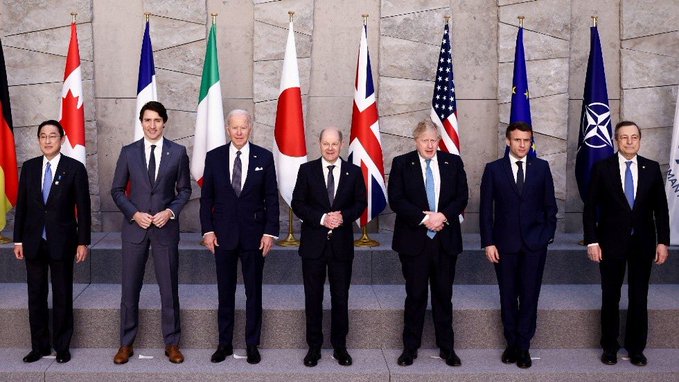 G7 has ostensibly “rejected” payments for gas in rubles and formed a united front against them causing the Kremlin to calrify that if there are no Russian rubles, there will also be no Russian gas:

Moscow is handling the details of its gas delivery plans to unfriendly countries for payment in rubles, but it won’t engage in charity if Europe refuses to pay in the Russian currency, Kremlin Spokesman Dmitry Peskov told reporters on Monday.

The Kremlin spokesman remained tight-lipped on what measures Russia might take if Europe refused to pay for gas in rubles, noting that these “issues should be sorted out as they develop.” “But we will definitely not supply gas for free, that’s for sure. It is hardly possible and reasonable to engage in charity in our situation,” he emphasized.

However, a closer reading of the G7’s “rejection” of ruble payments reveals they are only rejected in principle, but not necessarily in reality:

Robert Habeck told reporters that “all G-7 ministers agreed completely that this would be a clear breach of the existing contracts” for natural gas, which is used to heat homes, generate electricity and power industry.

Habeck said that “payment in ruble is not acceptable and we will urge the companies affected not to follow Putin’s demand.”

So companies will be “urged” not to make the payment in rubles, but the real question is will they face reprisals if they do what Russia now requires of them?

Making the payments in rubles would mean having to figure out a way to circumvent sanctions to get rubles. Russia’s Central Bank and most major Russian banks are sanctioned so who do you buy them from?

Interestingly that would mean that not just Russia, but many European entities would have the need to figure out how to keep some links between the Western and Russian financial ecosystems alive.

Putin’s deadline for the switch to ruble payments expires on March 31. Will be interesting to see what happens after. As Dmitry Trenin once said: great powers don’t bluff.

BTW, does Peskov’s formulation that Russia “will definitely not supply gas for free” leave room for payment in something that’s neither euro nor ruble?