Future Warfare: F-35s to Leisurely Direct Countless Missiles by Other Planes as Enemy Obediently Lines up to Be Obliterated

Future warfare will be a doozy. Just ask the Pentagon and Lockheed-Martin 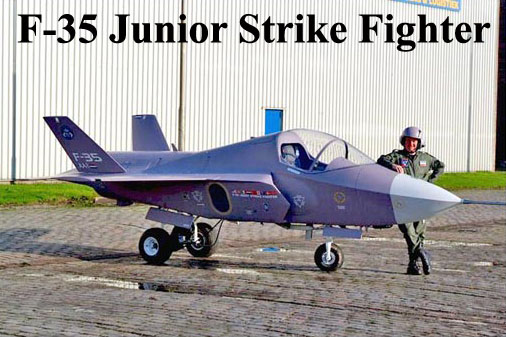 One of the recent concepts for employing the F-35 is the idea that it will not engage in combat itself but will provide targeting for other heavily laden shooter platforms. Various shooter platforms have been proposed including B-1 bombers, F-18s, and F-15s.

What a great concept, right?  F-35s loitering around the aerial battlefield, unseen, picking out hapless targets to be dispatched with ruthless efficiency by shooter aircraft dripping with missiles. What’s not to like?

You know, though, I feel a vague sense of uneasiness about this concept. Think about the history of modern aerial combat. It’s not an ordered, neat affair. It’s a confused, incredibly rapid, constantly changing melee and that’s completely at odds with the idea of a sensor aircraft leisurely spotting targets and passing off to a somehow unseen, unhindered, non-stealthy shooter while the enemy obligingly remains lined up and relatively static, just waiting to be shot.

If all that happens, I guess it could work. However, the reality, especially as the enemy employs more and more of their own stealthy aircraft, is that the sensor aircraft will be frantically engaged in their own life or death struggle to survive and won’t be leisurely passing on targets to shooters.

The shooters, being non-stealthy, will likely be targeted by enemy stealth aircraft and long range missiles and will also be frantically maneuvering for survival rather than calmly and methodically launching missile after missile.

Let’s think about the concept in a bit more depth.  What are the requirements for the concept to work?

For the sensor platform:

It must be close enough to see the targets with its sensor(s). Depending on the target, that could be a hundred miles away for a larger bomber or AWACS type aircraft or it could be a dozen miles to spot an enemy stealth fighter. Even spotting modern semi-stealthy fighter aircraft will require moderate proximity, say 30 miles or so. Now, the flip side of this requirement is that if the sensor is close enough to see a target, it’s also close enough to be seen unless we think the enemy doesn’t have the same kinds of radar, IRST, and other sensors that we have.

It must be unengaged. In order to calmly and methodically pick out target after target, the sensor aircraft can’t be engaged in its own frantic, twisting, turning, battle for survival. So, the sensor must be able to loiter around the battlefield, unseen and unengaged. Referring back to the previous requirement about range and mutual detectability, does this seem likely?

Similarly, for the shooter platform:

It must be close enough for the missiles to be in range. Our standard long range missile is the AIM-120C/D which has ranges of 50-100 miles although the effective range is likely closer to 30-70 miles. As with sensing, if the shooter aircraft is in range to shoot, it’s also in range to be shot. In fact, Russia and China reportedly have longer range missiles in service than we do!

It must be unengaged. In order to calmly and methodically conduct launch after launch, the shooter aircraft can’t be engaged in its own frantic, twisting, turning, battle for survival. So, the shooter must be able to loiter around the battlefield, unseen and unengaged. Refering back to the previous comments about sensor and missile ranges, does this seem likely? Is a non-stealthy, heavily loaded (further increasing detectability) aircraft going to be able to loiter near an aerial battlefield without being detected and engaged?

Now, some of you may be saying, wait, we do this kind of sensor/shooter operation all the time on the ground.  For example, a spotter, hiding in the mountains of Afghanistan, calls in shooter aircraft to bomb the enemy into defeat. Yes, we do  However, note the key differences. The sensor (spotter) is able to remain completely hidden (thanks to long range optics, the presence of significant cover, and the ‘stealthy’ nature of a single human) while still spotting targets and the shooters are completely unengaged and unhindered because the enemies that we’ve used this tactic on have no aerial capability of their own. Our shooter aircraft are able to loiter over the battlefield with no interference, whatsoever, from the enemy. None of this will happen in the aerial sensor/shooter scenario against a peer enemy. Thus, the ground example has no relevance to the aerial scenario.

We’re left with a concept that sounds appealing but seems unworkable under realistic combat conditions. This seems like yet another example of the military’s tendency to believe that everything we do will work and that the enemy will cooperate in their own destruction.

That’s my view of how this concept plays out. Do you see it differently?