Nobody was banned, nothing was paywalled

After 9 hours of downtime on Thursday Anti-Empire was again out for 24 hours for the entire Friday.

The problem was that the first time the host killed my account they didn’t actually tell me which cloud resource the site was overdrawing so I naturally assumed it was processing power. I took some steps to lower that further (but mainly blamed it on a traffic surge) and got the site activated again.

Trouble is it wasn’t really processing power. In reality, the site was over the “inode” limit which basically means there were too many individual files on the site’s part of the cloud for the hosting company’s liking.

It’s really an artificially low limit they impose on you to force you to buy more expensive dedicated hosting instead. But that would have been fine, if they had only told me that was the problem the first time (or before they even suspended it).

Instead, they took me down for a second time, and once again failed to mention which specific resource was the problem!

The suspension hit just as I hit the sack so that was 8 hours, then I spent the next 16 hours badgering their live chat support, which was insisting I sit and wait for an email reply from their higher-ups, until they finally gave me someone with the authority to make a decision.

He was the first to finally let me know it was actually inodes and not the CPU that were the problem (and apologized for the other admin which suspended me twice without properly elaborating) and after that, the fix was quick and easy. (There are a bunch of files because for every article the theme generates something like 10 thumbnails of different sizes so with 2,500 articles you’re looking at over 25,000 images alone, then multiplied several times for backup and development copies.)

That’s the thing with HostGator, they can’t be beat for price, but it does mean working with customer support that’s just awful. Still their 6 CPU, 6GB RAM cloud offer is the cheapest by far out there, so much it represents a saving of $480 per annum compared to the next cheapest provider, which is rather important when you putting out a site on the sums that I am. So while a nicer host would be nice, this is where we are at right now, and given the vital saving, I do not really regret being with them so far.

The unfortunate thing is that their suspension couldn’t have come at a worse time for the site, and indeed for some of you who were led to believe I took the site off to make a point. That wasn’t the case. The way HostGator “suspends” your account and supposedly defends its resources is by preventing access to any of your domains from every computer in the world.* You wake up one day to see your website displays “error 403” “you don’t have permission to access this” which looks an awfully lot like a ban, which is exactly what it is — a ban of every IP in the world to that domain. You also wake up to an email telling you to send them your IP so they will enable access just for you so you can work on fixing what they’re taking issue with.

Believe me, I gave the live chat support an earful for displaying the 403 error and not something more normal, but I can’t report that they cared much or have much power to change anything.

A few hours in, with still nothing moving on their end, I was also in parallel already working on a migration to a different host (Cloudways), so I got one of the support agents to whitelist more IPs that I need for the latter’s migration plugin to work. He did, but said something how “.htaccess had restarted when he tried”, so what he did was slap a username and password on the domain instead of an IP ban, which made it seemed like the site was perhaps paywalled, which if anything is an even a worse look. Again I told him he can’t possibly be serious but he gave me something about how its company’s policy and how it should have been done that way in the first place. (Apparently, even their own people aren’t really clear on what their procedures are, or they’re making stuff up as they go to cover for their ignorance.)

Anyway nobody was banned, nothing was paywalled. Nobody is ever going to be banned from reading, and nothing is ever going to be carried off behind a wall. A big part of this project is to try and get the word out, so anything like that would be totally self-defeating.

So yeah due to limited resources putting out the actual day-to-day Anti-Empire editions is just one part of the job. This technical stuff is the largest part of the other half, and there is a little bit of a learning curve. In a year I’ve internalized a great deal already but occasionally there are still some hiccups and will be in the future. Nobody is more anxious to shed my responsibilities as my own own improv-techie than I am, and to do more on the content end instead, but for now this is how it has to be.

*. Which does free up CPU and RAM but not inodes, so that much for their theory that suspension as opposed to a warning, was appropriate to urgently defend cloud’s resources.

Thanks for clarifying, I for one thought it was the beginning of Leftish censorship, very threatening, but found by going to the Facebook site, which I had bookmarked, I could access things there that way, though I think clicking on the article to read was still a dead end. Back to “normal,” now, this site makes a valuable contribution to the discussion. P.S. why does it say I have to be logged in to post a picture, when apparently I am already logged in as being allowed to comment ?

Marko drago, welcome to expanded hell — for those among us lucky enough to have been through countless similar episodes *before* the Age of Kloud (*). But don’t be led to believe that “what you pay is what you get” always applies. My current domain host and mail provider is among the cheapest on the planet, yet their support is one of the most prepared and efficient I’ve ever seen. At the other end of the spectrum, Amazon gets 1000’s of my monies, but half of the time their nincompoopish support boils down to telling me how much they love me for being their preferred customer.

(*) – which brings to mind: what did people do before the Kloud?

i thought the site had contracted the dread corona.

Again, Marko, if you want cartoons just let me know.

I saw the image where your profile is from the other day at Bill the Butcher, are you the artist? 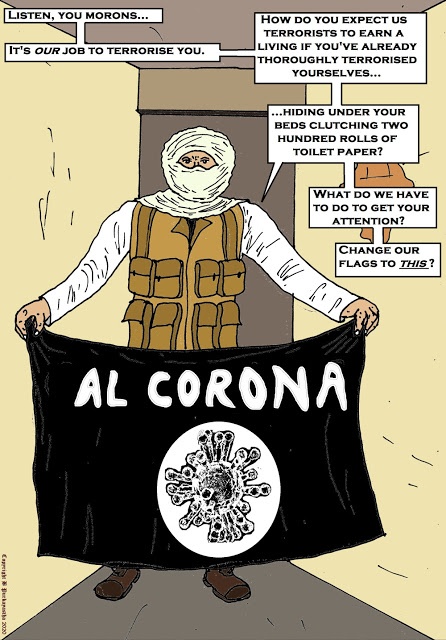 Yes. I am also Bill the Butcher. My cartoon website is here:

I read something by you the other day that Navid Nasr (ex-Fort Russ) linked to, it was quite interesting.

Yes, I know Navid well. So though I can’t support Anti Empire financially, if you need cartoons, you can take them directly from my site – no need to ask – or just let me know what you want.

thanks for the explanation…do u have a postal address that accepts financial contributions?

Kudos to you and whoever else is helping your wonderful news blog running! Personally, I wish to contribute financially, but I am not in a position to do so, especially with this Crisis happening. I hope my comments here on your site will help in some ways . . .

Funny tho because the “error 403” “you don’t have permission to access this site” message appeared the next day after I sent you a snarky-ish email explaining why I like reading your articles but prefer not to pay. Hilarious, the timing could not have been better, I was absolutely convinced that my IP was banned…LMFAO!

I thought the email was from the Nazi guy who was banned from commenting over namecalling other commenters.