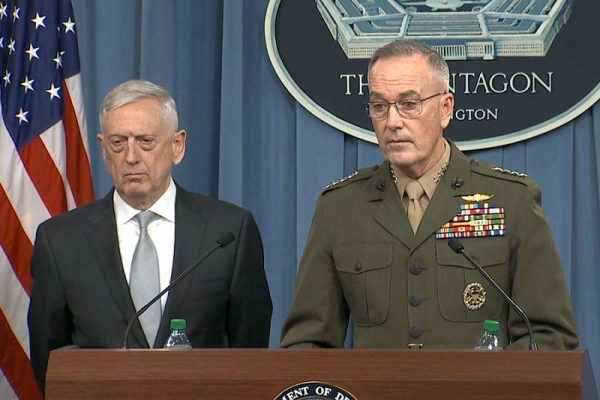 At the bottom of this CNN article:

She added that France does “not seek confrontation, and we refuse any possibility of military escalation.”

“We had ensured that the Russians were warned beforehand,” Parly said.

Meanwhile the Pentagon put it this way:

Meaning the Russians were warned in advance the strikes were coming, and were told just enough about them that they understood their forces were not in danger.

The Pentagon spokesman was at pains to say the Russians don’t have a veto over anything the US does but that is semantics. If the US doesn’t want to get into a fight with the Russians then it has to take their position into account. Of course that doesn’t mean either side has a veto on the other pulling something stupid.

Dunford: Only contestation of these strikes was from Syrian air defense systems. No mention of Russian A2/AD. The deconfliction channel with Russia was used, but Dunford says no “prenotification” of Russia. So targets were presumably not shared but perhaps airspace boxes were.

– "We did not do any coordination with #Russia on these strikes, and neither did we pre-notify them.”