”Admit nothing – deny everything – make counter-accusations.” 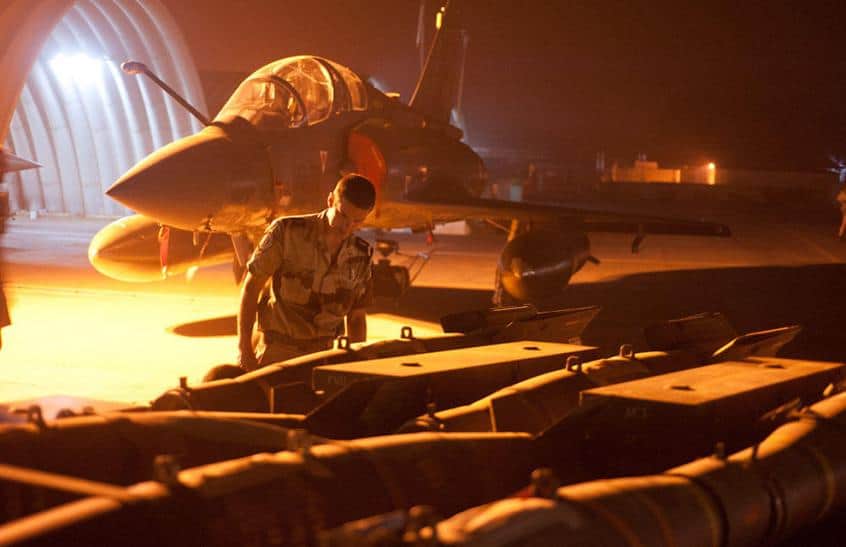 Counterinsurgency snake oil was sold to soldiers and civilians alike as a “new” brand of urbane and civilized warfare. The absurdly over-the-top euphemistic buzzwords and mantras applied to such strategies – “stability-” and “information” “operations,” “handshakes & hand grenades,” or “nation builders as well as warriors” – should’ve tipped us off that something severely dark was concealed beneath the seemingly sophisticate rhetoric. Because it’s turned out, time and again, that war is war – despite human beings’ best efforts at linguistic concealment – and the counterinsurgent, counter-guerilla, or counter-terror sorts tend to be the most brutal of all.

Recent evidence for this truism comes from distant and – for most Americans – off-the-radar Mali. This West African former French-colony is a veritable ground-zero for a long-running – largely Euro-American catalyzed – conflict spanning Sahelian Africa. And what some have called “France’s Afghanistan” ain’t going well either. But empires being empires – and the tendency of declining ones to behave badly – there’s been much brutality of late in the Franco-American adventures in the African Sahel.

Take for example last week’s controversial release of an investigative United Nations report that – just as locals and various human rights groups had been screaming for months – concluded that a January 3rd French airstrike in Mali killed 22 members of a wedding party, including 19 civilians.

Both before and after the report dropped, Paris denied that its warplanes had attacked a wedding party at all, or that there had been any “collateral damage” in its admitted strike (that hit only “terrorists,” of course). Now, lest one think this atrocity is a purely Parisian problem – a bit of American-attributable context is in order.

In a court of law, aiding and abetting murder can carry almost – or sometimes just as – strict a sentence as pulling the proverbial trigger. Even a getaway driver or lookout can get hit with rather tough bids. According to federal guidelines, even though those “classed as an accessory will face a less harsh punishment than the principal,” in most states, “their level of guilt is equal.” In fact, under federal law, “someone who is guilty of aiding and abetting does not actually have to be present during the crime” – they need only “have knowledge of the crime before or after it took place, and they may provide assistance in terms of financial support, actions or advice.” Sound familiar? It should – which brings us back to Mali.

While Washington – especially, but not exclusively, under Trump – hasn’t much interest in its self-application: under international law America’s overseas excesses seem to present an even stronger case for the prosecution. Because here’s the uncomfortable (and largely unknown) truth: great power-aspirant Paris simply could not wage war for eight years-running – with all the wedding-bombing brutality inherent – without a profound and decisive assist from America’s military and cornucopia of (18 distinct) intelligence agencies.

Heck, the almost too-excited to do a Ghadafi-murder by regime-change French couldn’t even bomb the daylights out of Libya for a full month back in 2011 before running short enough on munitions to require an American resupply bailout in bombs and spare parts – to the tune of at least $24.3 million over just the next month.

So it should hardly be surprising to learn that Paris’s Afro-Afghan-style Sahelian “forever war” is made possible – per PBS’s TV-trope – by viewers…or should we say American taxpayers…like you. Like us. These days the bill most Americans are unknowingly footing runs to at least $45 million annually. That buys plenty of the transportation, air refueling and drones to enable France’s neo-colonial needs and deeds. (PS: In case anyone suspected Joe Biden might cut off the spigot to our ally’s alcoholic-adventurism on that latter contribution – the CIA is reportedly expanding the third U.S. MQ-9 Reaper drone base in nearby Niger alone). Consider the irony: America’s oldest ally – which mightily aided the Thirteen Colonies rebellion against the British Empire – now counts on the resultant (ostensible) US Republic to subsidize their late-late-stage imperialism!

Which is to say, that the United States of America is at the very least complicit in killing 19 of those wedding guests in Mali. And slaughtered civilians is a decidedly severe crime, indeed. Harken back to those federal guidelines on aiding and abetting: “In severe cases the charge may rise to conspiracy.” Furthermore, the feds define “assistance” as usually involving “things such as driving a getaway car, being a lookout, or providing financial support, supplies or advice.”

So, given that standard US support for France’s severe Sahel operations includes transportation (getaway driver), drone surveillance (lookout), a $45 million dollar annual payout (financial support), and aerial refueling (supplies) – its safe to say that Uncle Sam is guilty of criminal conspiracy, at least in Paris’s broader crimes against Africans.

”Admit Nothing – Deny Everything – Make Counter-Accusations.”

I’ve alluded to the anecdote before, but it’s worth at least an annual reflection. It’s 1987. The now sanitized and canonized – even by urbane ex-emperor Obama – commander-in-chief Ronald Reagan has intel agents and special ops advisers running wild down in Central America on a quixotic but bloody rollback-communism crusade. The patron president has his oft-sociopathic proxy death squads shooting up any Salvadoran and Nicaraguan peasants – and, yesterday being Easter: priests and nuns (some American), it’s worth noting – with even vague leftist or leveling sensibilities.

The administration’s prize proxies, the insurgent Nicaraguan Contras are mowing down almost as many innocents – perhaps some 30,000 in all – as hyperactive adolescent American gamers are with their Nintendo controllers in the namesake video game released the very same year (a game in which “the player controls one of two armed military commandos named Bill ‘Mad Dog’ Rizer and Lance ‘Scorpion’ Bean…on a mission to neutralize a terrorist group called the Red Falcon Organization” – got that?)!

Anyway, that June the New York Times reports on how Representative Stephen J. Solarz, a Democrat on the House Foreign Affairs Committee, goes on a fact-finding trip to Honduras. At a training camp, a CIA agent introduces the congressman to a contra officer – who’s wearing (get this!) a baseball cap that reads: ‘”Admit Nothing – Deny Everything – Make Counteraccusations” So Solarz asks where he got the hat. This Contra cat’s answer: “it had been run off at the special effects shop in Langley” – you know, the Virginia locale housing CIA headquarters!

Got to thinking about that again today (as I do) whilst reflecting on the cruel commonalities between France’s refuse-admission, deny-to-death, counter-accuse-the-“terrorists” playbook after the UN report weighed in on the apparent slaughter of civilian Malian wedding-revelers – and America’s own not-so-“surgical”-as-billed strikes. In fact, according to obscenity-exposing legend Tom Engelhardt, the U.S. bombed at least eight wedding parties across the Greater Middle East from just 2001-13! In both the latest Franco- and repeated U.S.-atrocities, presumably polite and cultured civil and military leaders of these two grand democracies usually stuck to the same script that the CIA taught the Contra death squads way back when: ”Admit Nothing – Deny Everything – Make Counter-Accusations.’’

In the French airstrike on Malian civilians, Paris didn’t exactly “admit nothing” about the bombing – just rejected the possibly that their were any civilians among the dead (The French Army claimed shortly afterward only that it had “neutralized about 30 GAT” – its acronym for “armed terrorist group.”). But Parisian officials denied-away well before – and especially since – the recent release of the indicting UN report.

Back in January, Defense Minister Florence Parly – perhaps too confidently – proclaimed that “There was neither a marriage, nor women nor children…” and that “You can say lots of things … These are facts, exact, proven, cross-checked, certified.” Per usual, me thinks this particular lady doth protested too much.

After the release, Paris doubled-down on denial, officially stating “The Defense Ministry cannot consider that this report brings any proof whatsoever contradicting the facts described by the French armed forces.”

Then, swift as could be, came the “make counter-accusations” finale. As a New York Times reporter – it must be admitted – deftly diagnosed the callous climactic step: “The French military launched an attack of another sort: on the report and its methodology, including its use of unnamed sources.” Specifically, the French Defense Ministry’s stick-to-its-story statement asserted that “The only concrete sources on which this report is based come from local testimonies,” and anyway, none of those given from folks – you know, on the ground – “provide any evidence contradicting the facts as described by the French armed forces.”

See, when it comes French, American, and U.S.-enabled Franco-terror wars on terror – and their inevitable accidents, oversights, and overt crimes – self-styled democrats admit as little as possible, then deny the very dignity of their victims through their insincere denials. Finally, these Lord of the Rings-style “Men of the West” counter-accuse the very bodies posthumously protecting the very principle of victim-humanity. Isn’t that nice?

It wasn’t begun by Biden, by the way – all this French neocolonial indecency-enabling. Nor (gasp!) was it a product of The Donald show. No, while it’s true that the seeds of Sahelian interventionism and AFRICOM’s existence were sown by – that other too-easily forgiven by liberal establishmentarians (apparently because he paints pretty portraits of the military veterans he helped forever scar, or something) – George W. Bush, it was Barack Obama who truly turned Africa into both proving- and play-ground for the recent tech-savvy, outsourced, and abstract American way of war. And boy is that an ironic and off-putting tidbit.

I’ll admit this author sometimes maintains the perhaps overly hopeful delusion that a single fact or anecdote – if truly obscene and instructive – can (or at least ought) be enough to shake the collective soul of an apathetic citizenry. Maybe even produce a policy pivot. In practice, it’s been a repeatedly disproven and disappointing hypothesis. Nevertheless, indulge me just one anyway. Here’s something obscene and instructive enough to keep me up at night:

Eastward across the Sahel – in order to keep funding France’s favorite hired guns in despotic Chad (which hosts Paris’s current Sahel mission’s headquarters) – it was Obama, America’s first black president, with an African-born father to boot, who waived US laws barring military aid from countries conscripting child soldiers. This was an indecency done to enable a ruthless dictator long-enabled by Paris (so long as he lends thousands of Chadian troops to bolster French interventions in places like Mali).

Read that again. And I’ll hold on to the hopeless hope that the Malian wedding bombing takes on a whole different hue for readers…and warrants public attention. Such is the vicious cycle of exasperated delusion.

So it goes, here in year 20 of the increasingly far-flung forever wars defining my own complicit and absurd adult life.